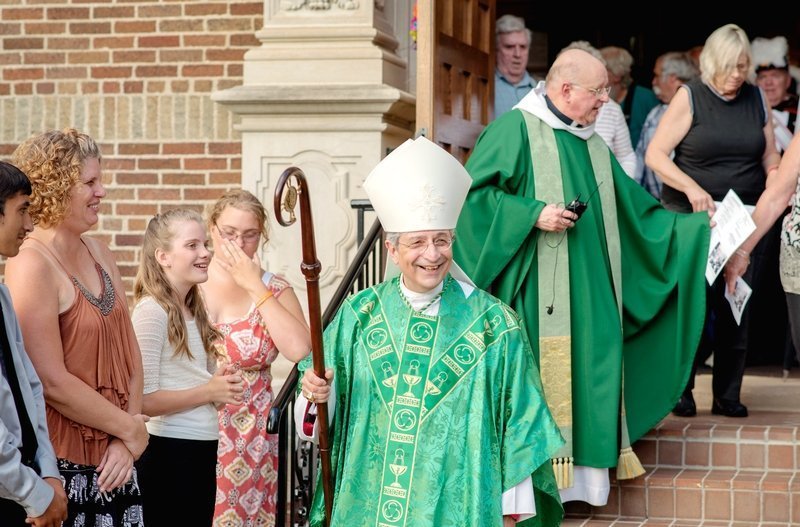 Bishop Salvatore R. Matano walks out of St. Mary Church in Dansville after celebrating Mass with parishioners in honor of the church's 100th anniversary.

DANSVILLE — "You know, you have a very beautiful church," Bishop Salvatore R. Matano told the congregation that packed the pews of St. Mary Church.

Parishioners, readily agreeing with the bishop, burst into thunderous applause toward the end of the 5:15 Mass on Aug. 15. Their response typified the joyful spirit flowing through the liturgy, which was held to note the 100th anniversary of the St. Mary church building.

The Blessed Mother was, fittingly, a dominant theme throughout the Mass. For starters, Bishop Matano — who ended his homily by leading the congregation in a Hail Mary — observed that the celebration fell on the feast day of the Solemnity of the Assumption of the Blessed Virgin Mary. Meanwhile, hymns performed by the parish musicians included "Immaculate Mary" and "Hail Holy Queen."

Further enhancing the occasion were numerous group photographs displayed near the church entrance, featuring first Communions and confirmations as well as graduating classes of the former St. Mary School. Another exhibit was the "Wall of Faith," a listing of several dozen people who had been baptized, made first Communion or gotten married — in many cases all three — at St. Mary.

In addition, a century-old newspaper article on display described how some 5,000 people had turned out on June 6, 1915, for the laying of St. Mary’s cornerstone by Bishop Thomas Hickey. That cornerstone was rededicated this past June 6.

The original St. Mary Church opened in the 1840s, and by the early 20th century a new facility was needed to accommodate a growing parish community. Ground was broken for the current church on March 15, 1915, and just nine months later it opened.

St. Mary’s stately structure, located at 40 Elizabeth St., is renowned for its stained-glass windows, Stations of the Cross and other exquisitely designed artwork. However, Bishop Matano emphasized during his homily, what takes place inside the building is more important than the building itself.

"Over these 100 years the most holy Eucharist has been, and continues to be, the heart and center of our lives and lived out in this church," the bishop said.

Dyan Monte Verde, 75, told the Catholic Courier that she and family members would walk to Sunday and weekday Masses at St. Mary for many years, and that she always carried a special feeling whenever attending those liturgies.

"It’s such a spiritual thing," she said.

For a number of decades St. Mary was one of two Catholic churches in this southern Livingston County village, the other being St. Patrick, which closed in 1959. In 2004, the remaining Dansville church joined with three in northern Steuben County — St. Pius V, Cohocton; Sacred Heart, Perkinsville; and St. Joseph, Wayland — to form the Holy Family Catholic Community parish.

"Indeed this is an extraordinary day in the life of the community of the Holy Family and especially here at St. Mary’s Church," Bishop Matano said Aug. 15, giving kudos to the leadership of Father Stephen Karani, Holy Family’s pastor; Father Michael Twardzik, parochial vicar; Deacon Dan Slattery, parish deacon; and the lay staff.

As a concluding segment of the centennial Mass, an annual Holy Family tradition was observed when the parish’s Christian Witness recipients were called forth by Father Karani to receive congratulations from Bishop Matano. These awards are given to Holy Family members who are nominated by fellow parishioners for modeling their Christianity through words and action.

Mary Mineo, chair of the centennial committee, remarked during the ensuing picnic reception that the Mass had been in the works for months and came off wonderfully, thanks to the dedication of many volunteers. She added that the weather cooperated as well, with a tiny sprinkle having ceased by the time the picnic started.

"There was a threatening cloud as I got to church, and I said, ‘Behave yourself,’" she said with a laugh.