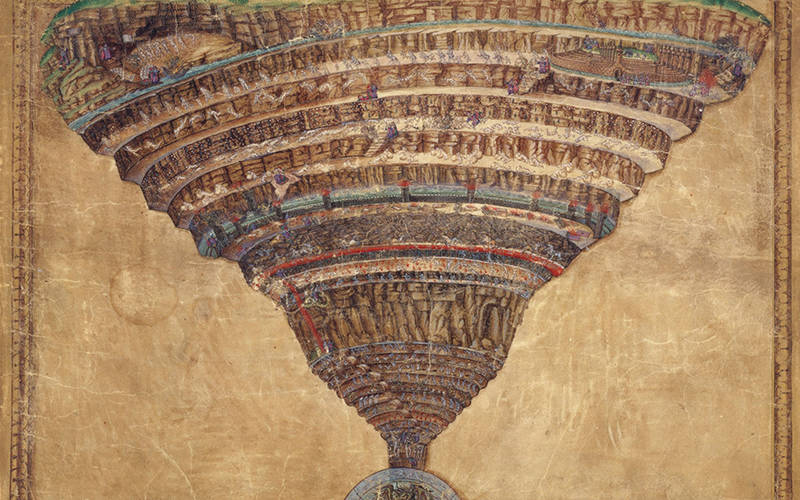 A illustration by Sandro Botticelli of the infernal abyss from Dante Alighieri's "Divine Comedy" is part of the manuscript collection of the Vatican Library. (CNS photo courtesy of Vatican Library)

Dante Alighieri was born in Florence in 1265; we do not know the day, but he tells us it was under the sign of Gemini.

We know relatively little about Dante’s life that does not derive from his writings. We know that Dante’s mother, Bella, died between 1270 and 1273, and that his father, Alighiero, died the year Dante turned 18. After his father’s death, Dante married Gemma Donati, and they had four children: Jacopo, Pietro, Giovanni and Antonia.

From the mid-1290s, Dante was actively engaged in Florentine politics and in 1300 was elected as one of seven priors to govern the city for two months. In 1302, Dante was condemned to exile from Florence. During his exile, he found refuge and hospitality in various locations in central and northern Italy. Dante died in Ravenna on Sept. 13th or 14th, 1321.

We also know relatively little about Dante’s education, where he studied and what exactly he might have read. We know, however, that he was indebted to the philosophy of Aristotle and the poetry of Virgil, to the theology of the Fathers of the Church and the teachings of both Franciscans and Dominicans.

At a time when Florence was home to key innovations in the visual and literary arts, Dante’s own originality as poet and intellectual played a significant role, both in itself and through its influence on authors such as Petrarch and Boccaccio, in the development of Italian and European culture in the centuries that followed.

Dante was actively involved in the artistic, intellectual, religious and political life of his day, and his writings clearly reflect this. In both form and content, they are wide-ranging, encompassing poetry, philosophy, theology, political theory.

His writings offer striking perspectives on the questions they explore, from the nature of earthly love to the relationship of the human person to God, from political order to the order of the cosmos.

All of Dante’s writings have a personal and experimental character, each in its different way an integral part of Dante’s exploration of truth, of human existence and of the relationship between them.

Dante does not take the art, learning, politics and religion of his day for granted; and he does not take himself for granted. His is a life-long journey — artistic, intellectual, spiritual — impelled by the question of what the ultimate truth of all those things is.

Dante lived in a turbulent and polarized world, characterized in significant measure by tensions and violence caused by conflict between papal and imperial forces. He was bitterly critical of many contemporary popes, who were making unprecedented claims to political authority and temporal power.

This, Dante believed, left humanity bereft of proper spiritual guidance, which could be provided only by religious leaders who led with the authority that stems from humble following in Christ’s footsteps, not by religious leaders interested in accruing material wealth and influence.

This put him at odds with popes like Boniface VIII, and it was partly through papal involvement in Florentine politics that Dante was condemned to exile.

Dante thought his exile was unjust, an instance of wider corruption; and in his writings, Dante argues passionately for justice in the face of injustice. Indeed, the desire for justice increasingly became one of Dante’s key motivations for writing. For Dante, this was not just a personal matter: What was at stake was nothing other than the well-being of humanity as a whole.

The interplay between the personal and the universal is clearly evident in Dante’s most important and influential work, the “Divine Comedy.” Written in exile between 1307-1321, this narrative poem tells the story of Dante’s journey through the realms of the afterlife, a spiritual pilgrimage from hell, through purgatory, to heaven, beginning in a “dark wood” of sin, suffering and confusion and ending in divine union with “the love that moves the sun and the other stars.”

In this journey, Dante meets and passes judgment on many fellow human beings, some portrayed as damned, others as saved. Yet he also dramatizes the realization that ultimately no human being can presume to judge others as God judges, and that the perfect expression of justice is love, in recognition of the divinity inherent in each human being, in the human person as such.

This realization has its roots in Dante’s early love poetry, which fuses the language of earthly love with that of religious devotion, and it sheds light on Dante’s writings as a whole. It also continues to make these writings relevant to us today, whether or not we agree with Dante’s particular opinions or worldview.

Within a Catholic context, as Pope Francis has recently highlighted, it is noteworthy that Pope Benedict XV, St. Paul VI, St. John Paul II and Pope Benedict XVI have all expressed great admiration for the spiritual and artistic value of Dante’s work.

Pope Francis himself speaks of Dante as “a prophet of hope, a herald of the possibility of redemption, liberation and profound change for each individual and for humanity as a whole.” As poet of justice, love and hope, Dante can certainly continue to inspire, even 700 years after his death.

(Vittorio Montemaggi is senior lecturer in religion and the arts at King’s College London and director of the Von Hügel Institute for Critical Catholic Inquiry at St. Edmund’s College, Cambridge. He is the author of “Reading Dante’s Commedia as Theology: Divinity Realized in Human Encounter.”)