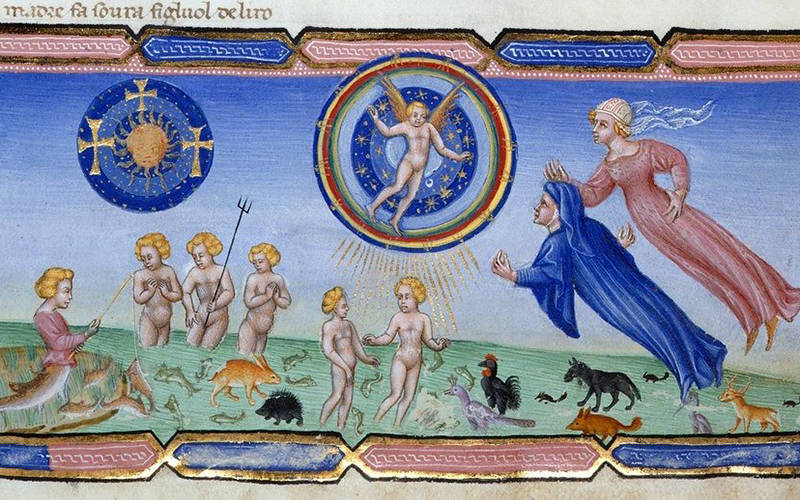 Detail of a miniature of Beatrice explaining to Dante that the universe is a hierarchy of being, with creatures devoid of reason in the early “sea of being,” and heaven as nine spheres ruled by the figure of love. (CNS photo by British Library via The Public Domain Review)

Dante’s “Paradiso” is the culmination of the journey begun in Canto I of his “Inferno,” where he was lost in the dark wood and on the way to damnation.

His journey through hell and then purgatory have helped him to experience conversion, in which he has, through the grace of God, learned to recognize sin, reject and repent of it, and move onward toward the purification necessary to experience the fullness of the beatific vision.

It is important to remember that the souls in purgatory were not earning heaven. Though sometimes misunderstood, purgatory is where God’s grace works in the hearts of those already saved and on their way to heaven.

In paradise the redeemed souls see and experience God’s love in all its fullness. It is here that we see what the “Divine Comedy” means, the reason it is called a “comedy” and not a tragedy, and it is perhaps the most powerful depiction of the transcendent in Western literature.

As Dante enters paradise, with Beatrice having replaced Virgil as his guide, he begins to experience a transformation that is powerful and profound. As Beatrice looks directly at the sun, with no distress at its intense brightness, Dante describes his own experience in response:

“The eyes of Beatrice were all intent / on the eternal circles; from the sun, / I turned aside; I set my eyes on her. / In watching her, within me I was changed / … Passing beyond the human cannot be / worded … until grace grant you the experience” (Canto I).

Gently guiding her pupil to the very center of the heavenly rose (Dante’s metaphor for heaven, wherein all the saints are seated around the center, which is the light of God), Beatrice consistently enlightens and challenges him to go beyond even the redeemed nature that he now has.

The meaning is clear — God’s grace offers us more and more until we are subsumed in his love beyond the ability of words to describe, as we shall see in the last part of the “Paradiso.”

In Dante’s depiction of heaven each saint is placed according to merit, though this itself is a result of grace, but no one objects at all. As one of these holy souls tells Dante, “In His will is our peace.”

And Dante, very different from his lost self in the beginning of the “Commedia,” expresses his new understanding: “Then it was clear to me how every place /in Heaven is in Paradise, though grace / does not rain equally from the High Good” (Canto III).

Like cups of a variety of sizes, all saints are equally filled with the grace and love of God.

A next stage for Dante involves moving beyond even his guide Beatrice to the source of her love and goodness.

In Canto X, at the behest of Beatrice, who says, “Give thanks, give thanks / to Him, the angels’ Sun, who, through His grace, / has lifted you to this embodied sun.”

Dante explains that he is so moved that he even forgets Beatrice in his rapture, but “she was not displeased, but smiled at this” as this response from Dante was what she desired for him when she descended into hell to ask Virgil for his help in leading Dante to salvation.

All the saved are called to move further along the path of union with God, and paradoxically this looking away from Beatrice unites Dante more powerfully to her. Therefore, even when Beatrice leaves him to another guide, St. Bernard of Clairvaux, in Canto XXXI, he accepts it unlike his weeping when Virgil left him at the end of the “Purgatorio.”

Bernard prepares Dante for the vision of God with a prayer to Mary, encouraging Dante to look upon “the face that is most like / the face of Christ” (Canto XXXII).

The final scenes of the “Paradiso” reveal to Dante and to the reader the very center of heaven, the light and life of God, the Holy Trinity. Three circles of divine light interconnect, with “our image” being shown in the second circle.

Dante is overwhelmed by the beauty, the center of which is Love. Three things stand out in this ultimate vision of the “Paradiso”: grace as the source of salvation, love as the essence of the life of God in the Trinity, and love emanating from that sublime unity, uniting all people and things.

Dante acknowledges the first concept: “O grace abounding, through which I presumed / to set my eyes on the Eternal Light” (Canto XXXIII).

The Scripture “God is love” is illustrated in these words describing the Trinity: “Eternal Light, You only dwell within / Yourself, and only You know You; Self-knowing, / Self-known, You love and smile upon Yourself!”

And the unity of the Divine Love pours out from its source to all who are willing to receive it by grace, as Dante sees in the Eternal Light’s reflection, “ingathered / and bound by love into one single volume — / what, in the universe, seems separate, scattered.” This vision is the heart and root of the entire “Divina Commedia.”

(Nancy Enright is a professor of English at Seton Hall University, where she is the director of the university core curriculum. She is the author of “Catholic Literature and Film: Incarnational Love and Suffering” and “Community: A Reader for Writers,” as well as numerous articles on issues related to theology and literature.)