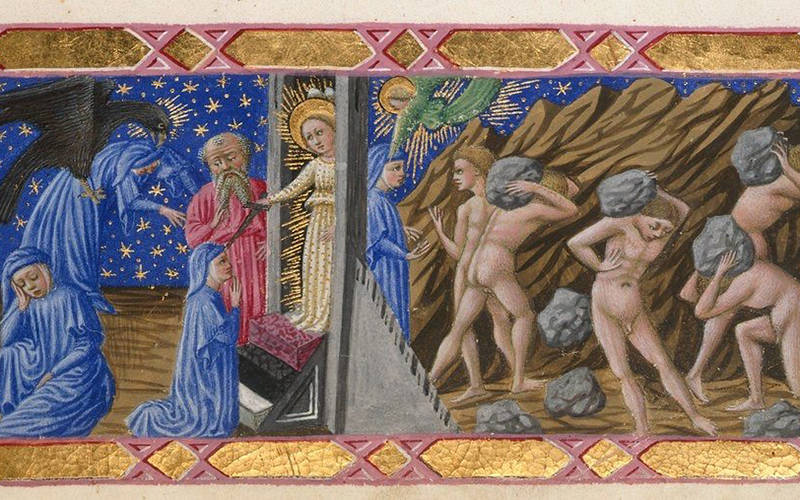 Detail of a miniature of Dante and Virgil at the gates of purgatory, and the Proud carrying heavy stones, in illustration of Canto IX of the “Purgatorio.” (CNS photo by Priamo della Quercia/British Library via The Public Domain Review)

After the two poets, Dante and Virgil, emerge from hell, they begin to experience many signs of the enormous difference between “Inferno” and “Purgatorio” (hell and purgatory). Whereas hell was a place of static pain and punishment, purgatory is a place of redemption.

In Catholic theology, purgatory is where the saved souls on their way to heaven are prepared for the vision of God. Though the various means of preparation or “purgation” (purification) can be difficult and even painful, it is a place of hope and faith. Purgatory has much more in common with heaven than it does with hell.

While “Paradiso” depicts a world existing in infinite and timeless peace and joy (the opposite of “Inferno’s” endless agony), only the “Purgatorio” depicts a world that is in flux — and in that sense, it is the closest of the three books to our world though the movement in purgatory is always in the direction of heaven, whereas on earth change can be either toward heaven or toward hell.

As the souls move toward God, ascending the seven cornices of the mount of purgation, each terrace (or cornice) of purgatory involves purgation from a particular sin or sins, and the means of cleansing is always fitted to the sin itself. By the end of Dante’s journey here, he has experienced deep cleansing and is ready to enter the final world of Dante’s “Commedia,” paradise.

The first canto of “Purgatorio” depicts a world in which stars show in the sky (as they did not in hell) and where nature flourishes and is restored (as when Virgil plucks a reed, at the behest of Cato, guardian of purgatory, and it is miraculously and immediately replaced — a metaphor for the restoration the souls there and Dante himself will experience).

Binding the reed round Dante’s waste, Virgil bathes his face as Cato tells the elder poet that Dante must be cleansed before meeting his first angel in this other world. Soon an angel appears, guiding a boat of newly arrived souls to purgatory. They are joyfully singing a psalm about salvation, fitting their beginning of the journey upward to God.

Among them, Dante meets an old friend, Casella, another poet, who sings a lovely song of courtly love, enrapturing even Virgil. However, Cato warns the souls to move along upon the upward path to God, another reminder from Dante the poet that his character in the poem is a pilgrim who must move away from his past of courtly love and even such a beautiful indulgence as listening to a song.

The business of purgatory, though full of hope and a kind of joy, is deeply serious and purposeful.

One example of this focus occurs in Canto XIII, the second terrace, where the sin of envy is being purged. Penitents, who closed their eyes to the good of others, have their eyes sewn shut, but they hear words exhibiting the opposite of their sin.

First is shouted, “Vinum non habent” (“They have no wine”), the words of Mary to Jesus at the marriage in Cana. Unlike the envious, Mary is concerned with what others lack and is willing to share the most precious gift she has, her son and his miraculous powers (in this case, to create more and even the best wine) with those who lack.

Another voice shouts, “Love those by whom you have been hurt.” Virgil explains, “The sin of envy / is scourged within this circle; thus, the cords / that form the scourging lash are plied by love.” The sinners, whom Dante greatly pities, cannot see him, but their prayers to Mary, as well as Sts. Peter, Michael and all other saints are heard from their lips.

When Dante expresses his anxiety about returning to hell permanently at death, one of the souls reassures him, “Oh, this,” she answered, “is so strange a thing / to hear: The sign is clear — you have God’s love.” With this reassurance, one of many in “Commedia,” Dante moves upward on the mountain with his guide.

As he weeps for the loss of Virgil, who must return to his place among the virtuous pagans, Dante is sternly rebuked by Beatrice for wasting his gifts and calling by falling away from the high destiny he has, one to which she (in both life and after death) has vigilantly called him.

Charles Williams’ books, “The Figure of Beatrice” and “Religion and Love in Dante,” though written decades ago, give an excellent analysis of the way romantic love functions in these scenes between Beatrice and Dante.

When her harshness, motivated by love and desire for his salvation, leads him to repentance, he is washed in the Lethe, river of forgetfulness in classical mythology, suggestive of baptism (Canto XXXI), and Dante is ready to travel with Beatrice into paradise on the final stage of his journey.

(Nancy Enright is a professor of English at Seton Hall University, where she is the director of the university core curriculum. She is the author of “Catholic Literature and Film: Incarnational Love and Suffering” and “Community: A Reader for Writers,” as well as numerous articles on issues related to theology and literature.)