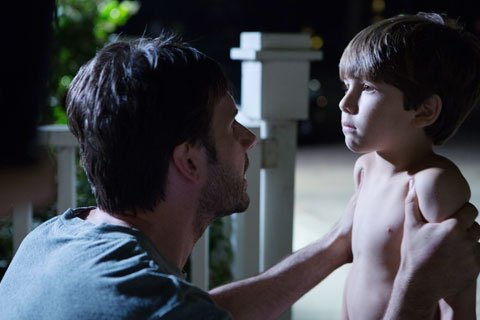 NEW YORK (CNS) — The restrained, but not overly original, thriller "Dark Skies" (Dimension) comes backed by the producers behind the "Paranormal Activity" franchise. And, both for better and worse, it shows.

Thus, writer-director Scott Stewart, like his "Paranormal" counterparts, presents viewers with comparatively little violence; only one passing scene relies, for its effect, on the sight of blood. But some of the proceedings — like the inexplicable rearranging of various kitchen items — feel too familiar, by now, to be scary.

As for the found footage device, Stewart holds off on introducing it, seemingly as long as he dares. But even so, its eventual, seemingly inevitable, appearance is likely to inspire a weary sigh.

Baffled and frightened, the parents eventually turn to reclusive conspiracy theorist Edwin Pollard (J.K. Simmons). His explanation indicates that the Barretts have unwittingly drawn the attention of some highly unusual, and potentially dangerous, visitors.

Stewart works into his script the pro-family notion that clan discord — under economic pressure, Lacy and Daniel have been quarreling — assists dark forces. But, with Jessie going through a rebellious phase, Stewart also shows us some adolescent experimentation with drugs, pornography and other forms of sexuality that make his eerie offering unsuitable for kids.

The film contains fleeting gore, brief scenes of sensuality, some involving teens, nongraphic marital lovemaking, a couple of uses of profanity and a smattering of crude and crass language. The Catholic News Service classification is A-III — adults. The Motion Picture Association of America rating is PG-13 — parents strongly cautioned. Some material may be inappropriate for children under 13.