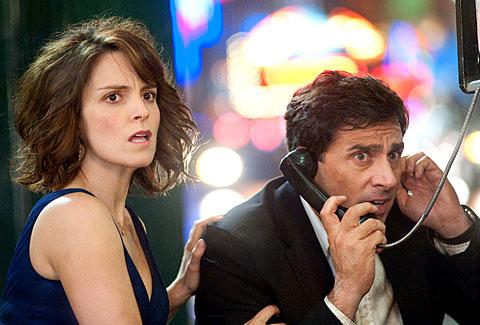 NEW YORK (CNS) — Occasionally, amid the frenetic proceedings of the romantic comedy-action blend "Date Night" (Fox), the tale’s two protagonists — an ordinary married couple from suburban New Jersey — pause to reflect on their enduring commitment to each other and on the threat posed to the vitality of their union by the exhausting demands of professional life and child rearing.
?
But these well-intentioned elements of Josh Klausner’s script are eventually overwhelmed by an increasingly seedy milieu and by the wayward behavior of a number of the characters the pair encounter during the unexpected nocturnal odyssey through the streets of Manhattan on which the plot — which hinges on a case of mistaken identity — launches them.
?
Anxious to get out of their rut, financial adviser Phil (Steve Carell) and real estate agent Claire (Tina Fey) Foster spontaneously decide to shift the venue of their weekly date night from a local tavern to a popular and pricey Gotham restaurant. With no reservation and no hope of ever being seated, they take the opportunity of another couple’s no-show to snag the table they had reserved under the name Tripplehorn.
?
As the mild-mannered Fosters soon discover, however, Tripplehorn is an alias used by two lowlifes (James Franco and Mila Kunis) — he a drug dealer and she a stripper — who are involved in a blackmail scheme that has roused the ire of local mob boss Joe Miletto (Ray Liotta).
?
Pursued by two of Miletto’s thugs (played by Common and Jimmi Simpson), Phil and Claire turn for help to a former client of hers, James Bond-like international intelligence agent Holbrooke Grant (Mark Wahlberg). Buff Holbrooke — whose perpetual shirtlessness and flirtations with Claire are played for laughs — proves willing to cooperate, despite the fact that the Fosters’ visit has interrupted his commitment-free bedroom frolic with a female Israeli agent of his acquaintance.
?
As directed by Shawn Levy, the Fosters’ further adventures bring them into contact with the cohabiting duo whose absence from the eatery started all the misery, and lead on to an underground sex club, awash in scantily clad, pole-dancing bimbos, where they briefly find themselves forced to entertain a powerful patron with perverse tastes.
?
Though their travails aid Phil and Claire to rekindle their flickering love for each other, and though the well-paired Carell and Fey provide at least a few scenes of enjoyable, understated humor, the sordid doings of the comic foils they meet on their frequently bullet-ridden journey preclude endorsement for most viewers.
?
The film contains considerable, though bloodless, action violence, partial rear nudity, much sexual humor, including gags about casual sex, masturbation and aberrant practices, at least one use of profanity and of the F-word and some crude and crass language. The USCCB Office for Film & Broadcasting classification is L — limited adult audience, films whose problematic content many adults would find troubling. The Motion Picture Association of America rating is PG-13 — parents strongly cautioned. Some material may be inappropriate for children under 13.
?
– – –
?
Mulderig is on the staff of the Office for Film & Broadcasting of the U.S. Conference of Catholic Bishops. More reviews are available online at www.usccb.org/movies.