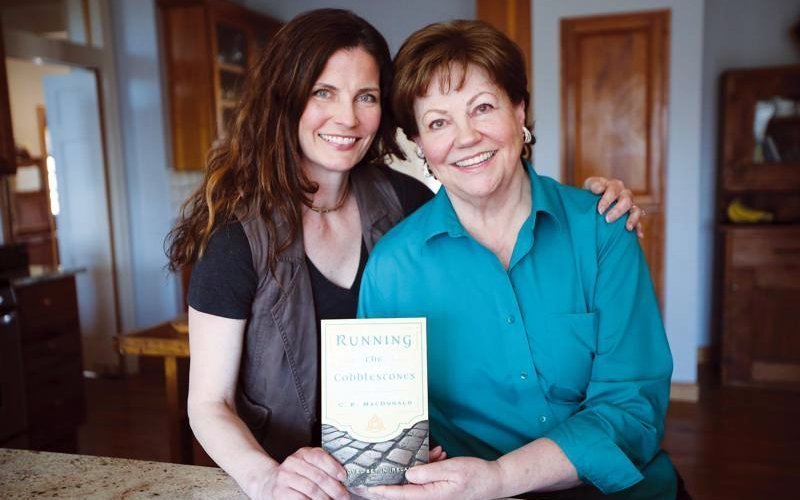 Kathy Schneeman and her mother, Cecelia MacDonald, pose for a photo with their self-published book "Running the Cobblestones." (CNS photo by Dave Hrbacek/ The Catholic Spirit)

WEST ST. PAUL, Minn. (CNS) — Several years ago, Kathy Schneeman of St. Joseph’s Parish in West St. Paul was finding extra time in her life, a bit unusual for a mother of nine, including young twins.

She had dabbled in writing while raising her children, and she decided to take it a step further.

One night in September 2012, while her husband, Eric, and son, Jack, were outside, Kathy sat down at a keyboard after putting her twins, then age 2, to bed. She got to work writing a Catholic-themed novel about a widow from Minnesota who moves to Ireland for a new start. In just one night, Schneeman finished the first chapter.

Next was an important step — finding an editor. She didn’t have to look far. A qualified one lived only a mile away.

Schneeman knew this person would say yes. It was her mother, Cecelia MacDonald. Armed with a journalism degree and years of experience, MacDonald eagerly pored over her daughter’s words.

After many revisions, they completed the final manuscript in 2016 and self-published the book, “Running the Cobblestones,” in 2017 under the pen name C.K. MacDonald. In the process, they deepened a mother-daughter relationship that was overdue for attention.

“Kathy and I really never did have one-on-one time until this venture,” said MacDonald, 73, a member of Assumption Parish in downtown St. Paul.

“I definitely think we’re closer now than we ever were,” said Schneeman, 52. “I’m the oldest of three children, and my sister was in and out of hospitals all the time,” which required much of MacDonald’s attention.

In recent years, they’ve almost seemed joined at the hip — or rather, the keyboard.

“We had so much fun writing together,” Schneeman told The Catholic Spirit, newspaper of the Archdiocese of St. Paul and Minneapolis. “We started revision after revision after revision, and had a really good time. In fact, Eric would come home from work, and we’d be either sitting in the kitchen or at the dining table laughing, and he would say, ‘You guys are just having too much fun.'”

But, the two also completed serious work during those “fun” days. They estimate the original manuscript was 125,000 words, a far cry from Schneeman’s short stories and writings in the St. Paul Pioneer Press Bulletin Board, a feature in which people write short anecdotes under a nickname. Hers was Mom of Many in Mendota Heights.

As their writing and editing sessions continued, MacDonald learned about her daughter’s passion for words.

“I didn’t realize how much she liked to write until she had pretty much (written) her first draft of a book,” MacDonald said. “And I was gobsmacked. … She never took writing classes when she was in school. She was an education major.”

The two attended college at the same time, both graduating in 1988 from the University of St. Thomas in St. Paul. MacDonald double majored in journalism and geology, and has done freelance writing and editing over the years.

Schneeman, meanwhile, became a teacher. Eventually, she left the classroom to raise children and channeled her passion toward them, informally giving lessons at home while they attended Catholic school.

One benefit along the way for Schneeman was meeting and becoming friends with acclaimed novelist Vince Flynn, who lived nearby and encouraged and supported her before he died of cancer in 2013. In fact, he gave her a helpful tip for creating the title: He said to use a verb, which she did. Flynn died before the manuscript was completed, but his wife, Lysa, read it, and she gave positive feedback, Schneeman said.

For Schneeman, one of the intentional and rewarding parts of the book project was introducing Catholic themes such as forgiveness, and the joys of having large families and being pro-life. One of the characters in the book has Down syndrome, and the mother-daughter duo say that character has been a reader favorite.

“We’ve always loved our faith and had a strong upbringing in our faith,” Schneeman said. “So … a natural topic for us is to have a Catholic-centered book.”

During the editing process, MacDonald braced herself for some pushback from her daughter. But, it never came. The first-time novelist eagerly accepted changes to the manuscript.

“When I read it, I thought it needed a lot of tightening,” MacDonald said. “What surprised me was how easy it was to offer her suggestions. She is very open to being edited. And that was a pleasant surprise. … She was a dream to edit. She had no ego about it at all.”

That cooperative attitude was rooted in admiration for her mother’s talent.

“I loved being able to write with my mom because I always thought she was such a good writer, and her mom before her was (too),” Schneeman said.

– – –
Hrbacek is a staff writer and photographer for The Catholic Spirit, newspaper of the Archdiocese of St. Paul and Minneapolis.