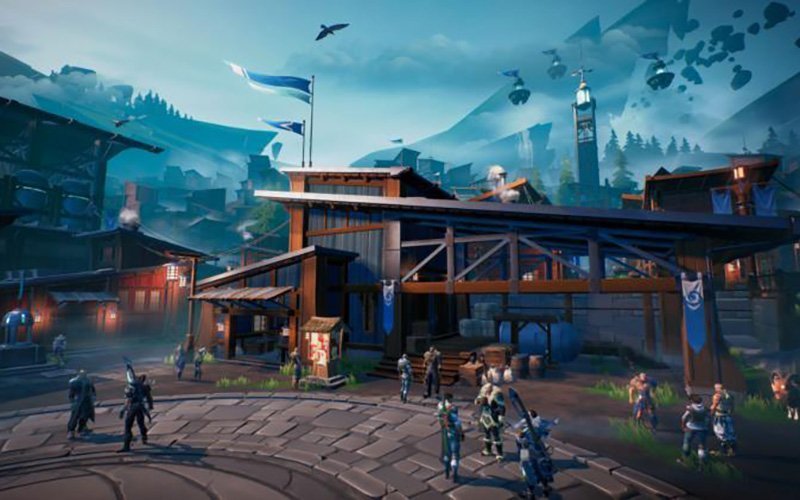 This is an image from the video game "Dauntless." (CNS photo by Epic Games)

NEW YORK (CNS) — Monsters are ravaging the world, and only you can end their rampage in “Dauntless,” the latest free role-playing title from Epic Games. With its bright Pixar-esque graphics, easy accessibility and freedom from most morally objectionable content, “Dauntless” will delight a wide range of age groups.

In the fantastical, floating realm of the Shattered Isles, elite warriors known as Slayers hunt down the race of Behemoths who are threatening the safety of humanity. While most games move forward through a story line, “Dauntless” is progression-driven, with players always in pursuit of better armor and stronger weapons since these open up pathways to tougher foes.

Gamers matchmake into teams of four, which allows them to increase their skills and forge better weapons and armor to prepare them for the next hunt. “Dauntless” promotes teamwork within the squad, although players seeking a challenge can set out on their own.

Each Behemoth poses a different set of obstacles, requiring players to strategize in advance. Some are immune to fire damage while others have flying capabilities reminiscent of dragons and owls. Equipment cannot be changed once a hunt is in progress, so gamers must prepare well.

Battles take place in a variety of environments, from snowy tundra to savannas, often reflecting the elemental nature of the targeted Behemoth. Armaments include melee weapons, guns and explosives, but no magical weapons or occult abilities. The only violence takes place during these battles and the blood effects are minimal.

There’s no coarse language, sexual content or use of alcohol or drugs. The primary concern for parents lies instead in the online multiplayer component, which is unavoidable since an internet connection is required to play the game. This naturally introduces online safety issues.

Parents should also be aware that while “Dauntless” is free-to-play, gamers are encouraged to spend real-world money on in-game currency, which can be used to purchase cosmetic upgrades or gain access to better rewards. Currency bundles range between $10 and $100.

Playable on PlayStation 4, Xbox One, and Windows (Epic Games Launcher). Nintendo Switch and mobile versions are currently in development.

The game contains fantasy combat and some bloodshed effects. The Catholic News Service classification is A-II — adults and adolescents. The Entertainment Software Rating Board rating is T — teens.
– – –