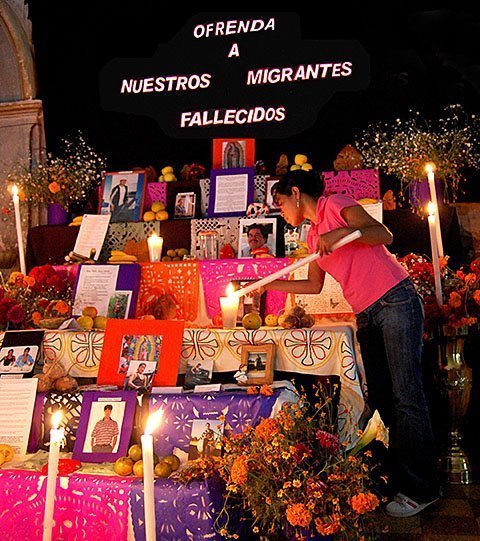 A woman is pictured in a 2009 photo lighting a candle at an altar that is built in advance of the Day of the Dead every year at Divine Savior Parish in Malinalco, Mexico. The altar is to remember the migrants from Malinalco who died while working in the United States.

MALINALCO, Mexico (CNS) — Ana Lilia Vazquez brought a photo of her late father, Anselmo Vazquez, to Divine Savior Parish in this village of farmers and weekenders in the mountains southwest of Mexico City.

There, she placed it on a Day of the Dead altar built by the families of migrants whose loved ones died while working in the United States — or, in the case of her father, died shortly after being deported from the States.

Vazquez said her father was unable to find work in Malinalco — having spent more than 20 years on-and-off in the United States — so he took his own life, feeling desperation and shame that he could no longer support a family of six and seeing his children subsequently drop out of school.

"You feel emotions of excitement and sadness," Vazquez, 24, said of Day of the Dead, an annual ritual in Mexico, where relatives remember loved ones by building altars adorned with photos and items they enjoyed — cans of beer in the case of Anselmo Vazquez. The families celebrate Mass for their loved ones Nov. 1, All Saints’ Day, and visit gravesites Nov. 2, All Souls’ Day.

"It’s sharing the pain and meeting them again," she added, explaining the significance of the Nov. 2 tradition. "It’s the only time during the year that our deceased arrive to see us."

Day of the Dead taps deep cultural traditions in Mexico, dating back to pre-Hispanic times and offering an opportunity to honor and remember relatives. It continues being an important ritual — especially in rural regions of Mexico, even as holidays like Halloween spread south of the border and images like black cats and bats are spotted as commonly as traditional sugar skulls and marigolds.

"It’s a way to continue feeling their loved ones’ presence," said Father Mario Morales, spokesman for the Diocese of Tenancingo, which includes Malinalco.

Churches in the Diocese of Tenancingo celebrate Mass for those who died during the past year. They also pray the rosary and the novena.

"The point is thinking of this communion with the person who passed away, but with the undertone of the Christian concept of eternal life," Father Morales said.

For migrant families whose loved ones died while in the United States, observing Day of the Dead can provide a sense of healing, closure and the fulfillment of cultural and community obligations, said American Ellen Calmus, director of the Corner Project, which supports migrant families in Malinalco.

Families back in Mexico find it almost impossible to travel to the U.S. to care for a dying relative, Calmus said. The bureaucratic red tape and delays involved in repatriating bodies also cause difficulties in a culture where a "velorio," or wake, is held almost immediately, and the grieving process can involve the entire community.

"They can’t do what they’re supposed to do. They can’t follow the tradition," Calmus said. "On top of the pain of not having been able to be with that relative … it can be difficult for the family to have the funeral Mass as they’d like," since there is no body.

"They usually can have a funeral Mass, but it can be long after local tradition demands. Sometimes there are extraordinary delays, and they get a body after it’s been held for so long that they want to do the burial very quickly," she said. "Some friends and family don’t learn in time to attend."

Calmus’ organization began building the first altar for migrants in 2008, although initially it was to be hosted by a local cultural center. Instead, the Augustinian priests at Divine Savior Parish offered space for the altar. Each year they bless it and celebrate Mass for the families.

Moving the altar to the parish made the event even more special for the families, Calmus said.

"It was in the community’s sacred space. It had that recognition from the church."

Approximately 25 families were expected to place photos of loved ones on the altar Nov. 1, said Ruth Sanchez, production coordinator for the Corner Project.

Calmus said the number of deaths of migrants from Malinalco has declined in recent years, possibly because the community’s migrants in the United States are not moving around as much and not risking the highway accidents that were previously too frequent.

Migration from Mexico also has collapsed over the past five as the U.S. economic crisis caused hardship for Mexicans working in the United States. Deportations increased during that time, and the border became tougher to cross, too.

Vazquez’s father was among those deported, after being incarcerated for a year, during which he was unable to call home. He was arrested for a traffic violation and was found to have been drinking.

Vazquez said she feels anger that he killed himself and that his arrest and deportation cut short her high school studies, since there was no money to pay for transportation to school or supplies.

But she also spoke hopefully of attending the Mass with other migrant families.

"I’m going to go there and see that he’s with God," she said.