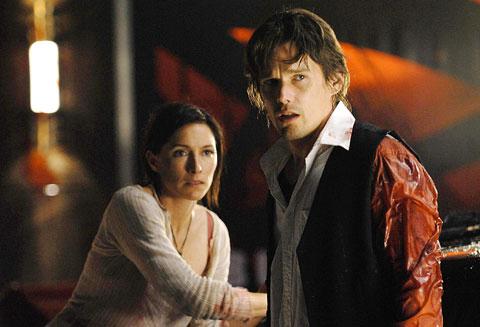 Claudia Karvan and Ethan Hawke star in a scene from the movie "Daybreakers." (CNS photo by Lionsgate)

Set in a futuristic world where a mysterious plague has transformed the vast majority of the population into blood-suckers, this latest addition to the hoary horror genre revolves around the global emergency provoked when the few remaining mortals can no longer supply the necessary nutriment to sustain their innumerable predators.

Sponsored by a conglomerate that harvests blood from comatose human captives — a sort of macabre version of Archer Daniels Midland — Edward is searching frantically for a viable alternative.

But, as food riots break out and starving “normal” vampires become maddened mutants undermining public safety, people-friendly Edward — already troubled by the ends-justify-the-means nature of his work — discovers that his corporation’s CEO, Charles Bromley (Sam Neill), is more concerned about maintaining market share than preserving an endangered species, even one to which he himself once belonged.

An accidental encounter with a group of human fugitives led by Audrey Bennettt (Claudia Karvan) introduces Edward to an underground world of resistance fighters and to the mysterious figure of Lionel “Elvis” Cormac (Willem Dafoe), a unique being who may have unwittingly discovered an alternative — and far more sweeping — solution to the crisis.

Co-writers and directors Peter and Michael Spierig effectively conjure a society where everyday Draculas are the norm — subway stations are packed with nocturnal, fanged commuters, cafes dispense coffee flavored with blood and, being immortal, everyone smokes — and they use this environment to make satiric points about the dangers of corporate excess and environmental irresponsibility.

But the intermittently gory proceedings, which feature needlessly realistic splatter throughout, move toward a climactic scene of orgiastic bloodletting.