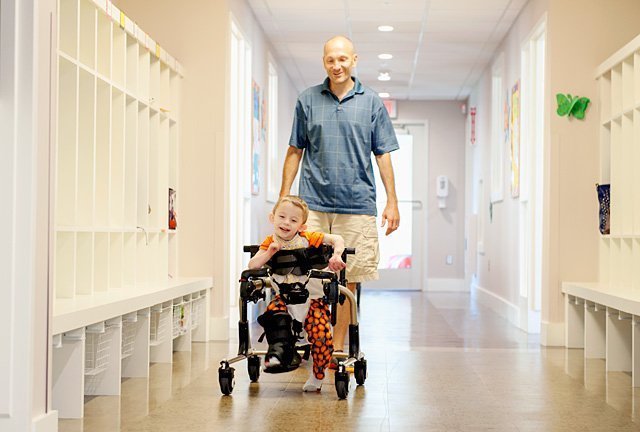 BRIGHTON — Sometimes endings are the start of something new.

That’s why it’s the start of a new day at the recently expanded Daystar for Medically Fragile Children, which moved from a cramped home in Pittsford to a new 11,000-square-foot building in Brighton in 2013.

Yet the completion of Daystar’s expansion also marks an end for the retail store Katie Shirley’s Closet, which closed in 2012 after successfully raising thousands of dollars for Daystar’s expansion through the sales of jewelry and locally roasted coffee.

Although the work of Katie Shirley’s Closet may be done, Katie Shirley’s legacy and memory live on at Daystar’s gleaming facility. The atrium bears a towering painting of angel wings and five hearts that a friend painted in memory of Katie and the four other Fairport teen "angels" killed in a tragic head-on collision in 2007.

The sun-filled atrium also includes a plaque with the inscription "Donated by loving friends and family in memory of Katie Shirley." Family and friends were on hand June 19 to witness the unveiling of the plaque as well as to tour the new space, which has allowed the facility to triple its capacity so that it is able to serve up to 40 children on a full- and part-time basis.

"(Katie’s family and friends) can take solace in knowing they are helping families who have nowhere else to turn," said Kim Condon, who has been the agency’s executive director since December 2012. Condon noted that Daystar provides services unique in the community: medical day respite care for medically fragile children through age 5.

The child-care center was started by the Sisters of St. Joseph in 1988, and although Daystar is now separately incorporated, the congregation continues to support the organization as one of its sponsored ministries. The facility includes playrooms that are filled with toys and adaptive equipment that help Daystar clients practice such skills as sitting and standing on their own. Windows scattered at various heights allow visitors to see into the rooms and unobtrusively observe the play — or sleep — taking place.

"We’re happy to see them graduate and go and move on, but it’s hard," said Dana Bennett, director of education.

For 16-month-old Seamus Callahan, Daystar’s new facility makes it possible to receive help for his health issues in addition to helping him learn.

"The nurses make sure he gets his medications," said Seamus’ mom, Colleen Callahan. "He gets all of his early intervention services right here, and they let us know everything about his day."

She said more children in the area could benefit from the services Daystar provides.

"I think it’s great that the community is learning more about it," Callahan said.

It was by chance that Stephanie Shirley first learned of Daystar’s work and decided that the fledgling charity Katie Shirley’s Closet should benefit it.

She said the roots of Katie Shirley’s Closet lay in a brainstorming session around her dining room table. From there, she and a group of friends mobilized to make bracelets. Their initial 600 bracelets sold out in a mere two weeks. When Stephanie Shirley happened to learn about Daystar from a volunteer, she decided that proceeds should go to the charity. She said she felt it was the type of charity her daughter would have loved to support.

"My intention was never to memorialize Katie; it was a desperate attempt to find something good out of losing her," Stephanie Shirley said of starting Katie Shirley’s Closet.

That they did, raising more than $100,000 for Daystar. With every sale, customers also received a card bearing a list of inspirational quotes gathered by Katie for a graduation party that never happened. Stephanie Shirley said the quotes were a way to introduce her daughter to customers and to the community.

Though she has seen them countless times, Stephanie Shirley said the quotes still speak directly to her.

A charitable effort to honor Hannah Congdon, another of the Fairport girls killed in the 2007 crash that killed Katie Shirley, is undergoing a Facebook challenge timed with what would have been Hannah’s 25th birthday on Sept. 13. The challenge asks people to donate $25 to support Hannah’s Hope, an early childhood center in Katito, Kenya, that was built in Hannah’s honor and dedicated to the Fairport "angels." To donate, make a check out to Joining Hearts and Hands LTD, with "Hannah’s Hope" on the memo line. Mail it in care of William Cala, 9 Fieldstone Grove, Fairport, NY 14450.