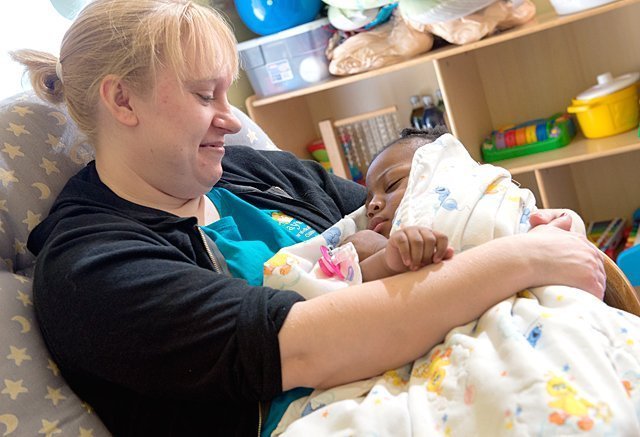 One component of New York state’s 2016-17 budget will place a heavy burden on local low-income families with medically fragile children, and it may even deal a fatal blow to Daystar for Medically Fragile Children, according to Kim Condon, the facility’s executive director.

Condon has enlisted the help of state Assemblyman Joseph Morelle and state Sen. Joseph Robach to obtain an exemption from the state’s plan to eliminate Medicaid funding for transportation to and from respite services at the end of next month.

The Sisters of St. Joseph of Rochester founded Daystar in 1989 as a foster home for medically fragile infants, and since then it has evolved into a pediatric day-respite center for medically fragile children between the ages of 6 months and 5 years, Condon said. Not only is Daystar licensed by the state Office for People With Developmental Disabilities as a day-respite provider, but it also provides pediatric nursing, therapeutic services and educational-enrichment programs for 40 children who have a variety of complex medical needs. Some of these children are nonverbal, some rely on wheelchairs and other devices to move or even stand, and still others require feeding tubes, ostomy bags or portable oxygen tanks.

Daystar’s staff members help families coordinate their children’s various therapies, which often take place at the facility, and navigate the state’s sometimes complex health-care and education systems, Condon said, noting that 80 percent of the children currently enrolled in Daystar are from low-income families. Twenty-four of these children — more than half the facility’s enrollment — currently require assistance from a medical transportation service to get to and from Daystar, either because their families don’t have their own vehicles or because the medical equipment they require is difficult to transport in private vehicles, Condon added.

That’s why New York state’s plan to eliminate Medicaid funding for transportation to and from respite facilities as of June 28 would have a disastrous effect on many of Daystar’s families, she said. Currently, 76 percent of the children at Daystar have parents who are employed. This statistic is remarkable, Condon said, because nationally, nearly half of all mothers of children with special needs are forced out of the workforce in order to care for their children and take them to frequent doctor and therapy appointments.

Alice Moultrie was a part of that statistic for the first two years after her son, Davares, was born. Davares was born with hydrocephalus, which means he relies on a shunt to drain excess fluid from his brain, and if that shunt stops working, he will need surgery to repair or replace it. Moultrie stayed home with Davares, who is now 4, for two years in order to take him to his appointments and monitor him closely in order to pick up on any signs that might indicate his shunt wasn’t working properly. Such signs could range from seizures to lethargy and headaches, but they can be hard to pick up on because Davares is nonverbal.

Two years ago a social worker told Moultrie about Daystar, and after checking it out, Moultrie decided to enroll Davares, which was a big step for her.

"We really don’t let anybody else watch him. Sometimes the in-laws, but we leave them with a sheet of things to watch for (that would indicate a malfunctioning shunt)," Moultrie said. "Just knowing that the nurses at Daystar would know what to do for him really brings relief to me and my husband."

Enrolling Davares at Daystar allowed Moultrie to return to work yet maintain peace of mind that her son was safe.

"I would never have went to work if we didn’t have Daystar, and financially, we needed me to go back to work," she said.

Medical Motor Service currently transports Davares and his wheelchair to and from Daystar each day, and if Medicaid stops paying for that service, Moultrie said there is no way she will be able to get her son to Daystar. Many other parents will be in similar situations if Medicaid stops funding transportation to Daystar, and their children will be cut off from services they so desperately need, Condon said.

"This will decimate our program. Daystar will be out of business because our families cannot make it here," she said.

Condon has asked the state’s health department for an exemption that would allow Daystar’s families to continue to receive Medicaid funding for transportation to the facility. She also has helped Robach and Morelle draft legislation that would authorize Daystar as the state’s first and only pediatric day-respite center. This would, among other things, formalize existing partnerships between Daystar and the local medical community, streamline care, and authorize Medicaid transportation services for children and family members, Condon said.