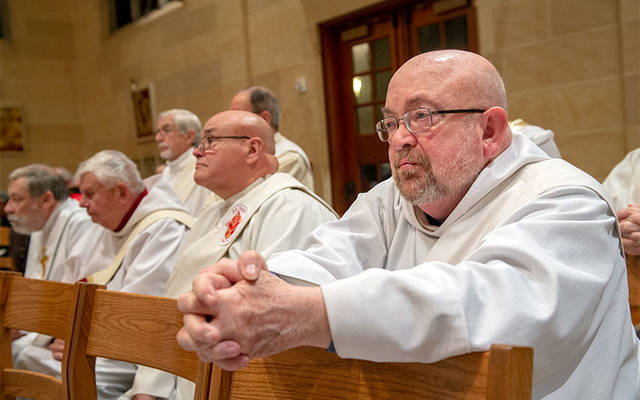 Deacon David LaFortune kneels during the Chrism Mass at Rochester’s Sacred Heart Cathedral April 16. Deacon LaFortune is concluding his service as pastoral administrator of St. John Vianney Parish in Bath and Hammondsport at the end of June. (Courier photo by Jeff Witherow)

Over the past decade, Deacon David LaFortune has put his ministerial and managerial backgrounds to good use while serving Catholics in Bath and Hammondsport.

Having overseen the successful blending of two parishes into one, Deacon LaFortune will conclude his service as pastoral administrator of St. John Vianney Parish at the end of June; a party in his honor is scheduled for June 23 at St. Mary Church in Bath. Father James Jaeger, who has served as the parish’s sacramental minister, will assume the pastorate.

Deacon LaFortune, 68, was born in Hagersville, Ontario. Canada. He later lived in Windsor, Ontario, as well as Seattle, Los Angeles and New Orleans, graduating in 1976 from the University of New Orleans with a bachelor’s degree in business administration.

Rather than enter the corporate world, he joined the Carmelite order in 1977 and spend several years in priestly formation, teaching and earning a master’s degree in divinity from the Washington (D.C.) Theological Union. However, he left the order in 1982 after twice postponing his ordination as a transitional deacon.

He and his wife, Patricia, were married in 1983 in Houston. He worked in management for several years, moving to the Corning area in 1994 in a supervisory role with the American Greeting Card Co.

In 2001, Deacon LaFortune entered formation for the permanent diaconate in the Diocese of Rochester. Two years later, he made a career about-face, becoming a pastoral associate in the Schuyler Catholic Community.

“I was missing what I really felt I was called to do,” he explained.

After completing diaconal studies at St. Bernard’s School of Theology and Ministry, Deacon LaFortune was ordained in 2005. He continued to serve in Schuyler County until 2009, when he was appointed pastoral administrator at St. Mary Parish in Bath. One year later, he took on oversight of St. Gabriel in Hammondsport as well. In 2012, the two faith communities transitioned from a cluster into a single parish, St. John Vianney, and Deacon LaFortune recalled that facilitating that process was a highlight of his tenure.

“It was a lot of town hall meetings, a lot of listening to everybody,” he said, adding that he is proud of the parish’s financial stability, as well as efforts to bring parishioners closer to Jesus with such initiatives as the popular ChristLife evangelization program.

Deacon LaFortune said he’s opted to conclude his service as a pastoral administrator at this time in order to spend more time with family, particularly his wife, a former pastoral associate at All Saints Parish in Corning/Painted Post. The couple has two daughters and six grandchildren. After a period of rest, Deacon LaFortune hopes to receive a new diaconal assignment in the Southern Tier.

“It’s going to be a very new journey, an exciting opportunity for me,” he said.

Tags: Holy Orders, Steuben County News
Copyright © 2023 Rochester Catholic Press Association, Inc. All rights reserved. Linking is encouraged, but republishing or redistributing, including by framing or similar means, without the publisher's prior written permission is prohibited.