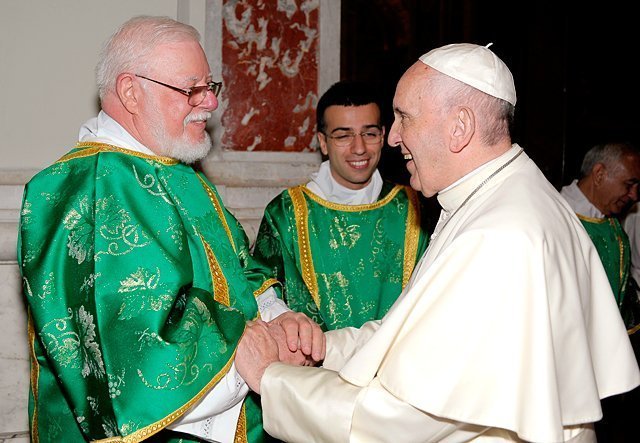 Deacon Raymond Defendorf (left) is greeted by Pope Francis at the Vatican May 29 during a special papal convocation for deacons.

Deacon Ray Defendorf acknowledged a recent papal celebration for deacons in style — by journeying to Rome, meeting Pope Francis and assisting him at Mass.

Deacon Defendorf, who serves at All Saints Parish in Corning/Painted Post, attended the Jubilee for Deacons convocation May 27-29 along with his wife, Patty, and a sizable tour group that he was leading. The event took place at the Vatican and was held in conjunction with the yearlong Extraordinary Jubilee of Mercy.

For the closing papal Mass on the morning of May 29 in St. Peter’s Square, Deacon Defendorf was one of two deacons selected to serve at the liturgy.

In addition to preparing the altar for the Eucharistic Prayer, Deacon Defendorf incensed the Holy Father as he elevated the host and chalice during the consecration. He also exchanged the sign of peace with Pope Francis and received holy Eucharist from him.

The Jubilee for Deacons brought together deacons and their families from around the world. During the program of events, participants discussed the key role that a deacon plays as the image of mercy in promoting the new evangelization.

Deacon Defendorf has served as a deacon since 1982, when he was ordained as part of the inaugural group of permanent deacons for the Diocese of Rochester.