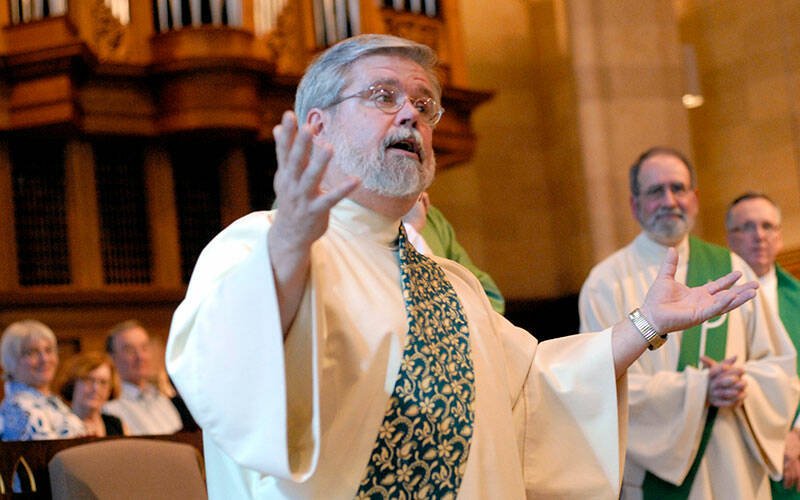 Whether serving as a teacher, school administrator, coach or athletic official — or in his current role as a prison chaplain — Deacon Daniel Hurley consistently has combined his Catholic faith with his professional life.

“I’ve been graced by God,” he said of his many positions and ministries, nearly all of which have had a Catholic connection. “I’ve been blessed to do a lot of neat things.”

Deacon Hurley grew up in Rochester’s 19th Ward, attending parishes in that area. He graduated from East High School and although not a product of Catholic education, he went to Mass and confession every week — “that got me into a good discipline,” he remarked — and was proud of being an altar server.

His desire to serve the church in a greater capacity was stoked while attending St. Bonaventure University in Olean. Thanks to the influence of the Franciscan friars who helped found and remain influential at St. Bonaventure, thoughts of a religious vocation began surfacing.

“I was struck by the Franciscan spirit,” Deacon Hurley recalled, noting that he was attracted to the friars’ lifestyle and considered becoming a Franciscan priest but ended up marrying. He and his wife, Joan, have three children and four grandchildren.

He eventually earned a bachelor’s degree in Spanish from St. Bonaventure, later receiving a master’s degree in Spanish from SUNY Binghamton and certification in educational administration from Boston College. After graduating from St. Bonaventure, Deacon Hurley became a teacher at Elmira Notre Dame High School. During that time, he became involved in Cursillo, an international movement that guides lay Catholics toward deeper spirituality and evangelization efforts.

During Deacon Hurley’s years in Elmira, the Diocese of Rochester was launching its permanent diaconate program – and the more he talked with those involved in diaconal formation, the more he sensed a strong call to enter the formation program.

“It was like, ‘OK, God, I hear ya, I hear ya!’” said Deacon Hurley, who was ordained a permanent deacon in 1989 by Bishop Emeritus Matthew H. Clark.

In his nearly 33 years as a permanent deacon, he said he’s always taken to heart the deacon’s primary role of service. Along with teaching at Elmira Notre Dame, Deacon Hurley has served as principal of St. Mary Our Mother School in Horseheads and Immaculate Conception in Ithaca, and also worked in the Spencer-Van Etten and Bath school districts. Other career and ministerial stops have included pastoral administrator of St. Michael/Our Lady of Perpetual Help churches in Rochester; campus minister at Cornell University; and parish deacon at St. Mary Our Mother, Horseheads; Schuyler Catholic Community, Watkins Glen/Odessa; and All Saints, Corning/Painted Post.

Deacon Hurley is currently assigned to Ithaca’s Immaculate Conception Parish, where he preaches regularly and oversees the Rite of Christian Initiation of Adults program.

Deacon Hurley meets regularly on an individual basis with inmates, often having heart-to-heart conversations – especially regarding family members from whom they’ve been separated. He said it’s gratifying when prisoners thank him for his ministry, noting a letter of thanks he recently received from an inmate for his role in arranging a visit from the inmate’s mother and grandmother whom the inmate wasn’t sure he’d ever get to hug again.

“There’s all kinds of opportunities for ministry, that’s for sure. You have to just be genuine, be yourself and not put on airs,” Deacon Hurley said of his approach to connecting with prisoners.

He said one recurring message that he preaches to inmates is that God loves them and is waiting for them to come to him. Deacon Hurley acknowledged that his message might not initially reach everybody — perhaps at best a small fraction — but if they hear the word of God enough times, “I think they finally internalize it,” he said.

“They’re going to get something that they can take and chew on. You do what you can do, and leave the rest up to God,” he said.

EDITOR’S NOTE: “Profiles in Faith” highlights Catholics throughout the Diocese of Rochester — of all ages and walks of life — who are role models for living the faith. To suggest a person to profile, email Newsroom@CatholicCourier.com.