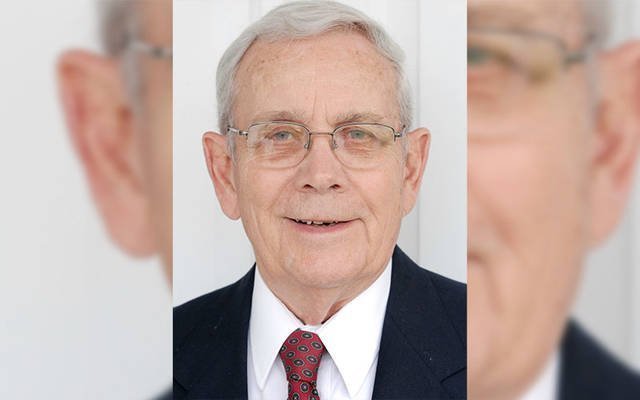 Although he only called the Rochester region home for the last few chapters of his life, Deacon Mack was well-known in the local diaconal community for his love for his country, his family and the people he served through the church, noted close friend Deacon Dan Kinsky.

Deacon Mack was born in Niagara Falls and grew up in Endicott, N.Y., where he went to work at IBM shortly after graduating from Union Endicott High School in 1942. The next year he joined the U.S. Army and served in the 112th Regiment of the 28th Infantry Division.

On June 6, 1944, he was part of the second wave of soldiers that landed on Normandy’s Omaha Beach on D-Day, and he took part in some of World War II’s most pivotal battles in Europe, including the Battle of the Bulge. He received numerous honors, including the Bronze Star, the Purple Heart and the French Chevalier of the Legion of Honor.

Although he witnessed horrible things during the war, Deacon Mack clung tightly to his Catholic faith.

After the war ended, Deacon Mack returned to Endicott and his job at IBM, which later transferred him to Charlotte, N.C. He met his wife, Helen, at IBM. The couple married in 1946 and went on to have six children.

After a career that spanned more than 40 years, Deacon Mack retired from IBM and entered formation for the permanent diaconate. He was a part of the Diocese of Charlotte’s first class of permanent deacons and was ordained on May 28, 1983, by Bishop Michael J. Begley. Deacon Mack viewed his vocation as a way of thanking God for preserving his life during the war, he told the Courier in 2014.

Deacon Mack and his wife were very involved with the Rite of Christian Initiation of Adults in Charlotte and helped bring more than 400 people into the Catholic Church over the years, according to his daughter, Barbara Perkins. The couple also enjoyed visiting the sick as well as nursing-home residents, she said.

In 2004, the Macks moved to the Finger Lakes region of New York to be closer to family. Deacon Mack soon began helping out at St. Ann Parish, which now is part of St. Katharine Drexel Parish in Palmyra and Macedon. He later began worshipping with Perkins at Church of the Resurrection in Fairport.

“He was a wonderful guy, very committed to his family and very committed to his church,” remarked Deacon Jim Fitch, who met and became friends with Deacon Mack shortly after the Macks moved to Macedon. “He was so thankful to the Lord for getting him through the war times. He lived a good long life, and I’m sure I know where he is now.”

Memorial calling hours and a memorial Mass will be held at a later date, once the coronavirus-induced restrictions on public gatherings have been lifted. Deacon Mack was entombed at Riverside Cemetery in Rochester.