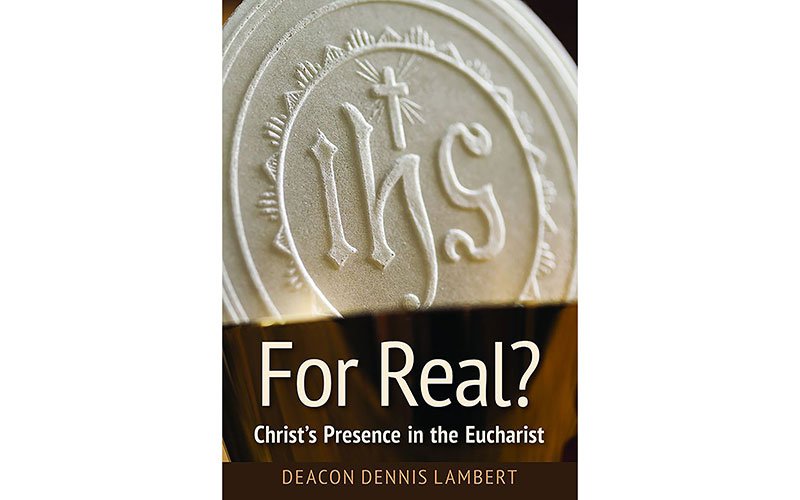 This is the book cover of "For Real? Christ's Presence in the Eucharist" by Deacon Dennis Lambert. The book is reviewed by Mitch Finley. (CNS photo courtesy Liguori Publications)

In some Catholic circles — especially academic ones — the term “apologetics” gets little, if any, respect. It’s true that some efforts at apologetics are little more than Catholic fundamentalist attempts to prove “us” right and “them” wrong.

Yet, rooted in intellectually responsible Scripture studies and theology, apologetics can help Catholics to embrace a better, more adult understanding of their faith and cultivate an ability to explain it to others.

Dennis Lambert, a deacon in the Diocese of Phoenix, serves up just such an approach to apologetics.

In this case, Lambert’s focus is on the Catholic concept of “real presence,” a traditional term that sums up the Catholic doctrine — shared, in one form or another, by some mainline Protestant churches — that in the Eucharist the risen Christ is present, body and blood, soul and divinity, and therefore (to paraphrase the Catechism of the Catholic Church), the whole Christ is truly, really and substantially contained in the consecrated bread and wine of the Eucharist.

Motivation comes, the author explains in his book’s preface, from a 2019 Pew Research Center study that revealed that “more than one-third of all Catholics who attend Mass at least once a week ‘don’t believe that the Communion bread and wine actually become the body and blood of Christ.'”

Rather, they believe with many Protestant/evangelical Christians that holy Communion is “merely a symbol or remembrance of the Last Supper.”

At the same time, in the months just following the publication of the Pew study, more than a few theologians, liturgists and sociologists expressed their concern that the Pew study was not without its flaws.

Some objected to the ways the Pew study formulated its survey questions; others questioned the meanings the survey apparently took for granted for terms such as “symbol” and “sign.”

Lambert’s research is thorough and his insights helpful for anyone who would gain a better understanding of Catholic beliefs about the Eucharist and holy Communion.

His discussion of what both Old and New Testaments contribute to these beliefs is well done, as is his summary of the teachings of the early Fathers of the Church on the topic at hand and his overview of official church teachings.

While insightful and clearly stated, one may hazard the opinion that Lambert’s book could have used a livelier, more creative style. Also, it would have been refreshing to learn a few things about some of the creative insights suggested by contemporary sacramental theologians.

For example, one Catholic thinker suggests that today’s educated adult believer may gain a deeper understanding of the real presence by supplementing “body and blood, soul and divinity” with “whole person of the risen Christ.”

The final chapter of this book, “Evangelizing the Eucharist: Sharing the Truth of the Real Presence,” is exquisite and powerful.

Readers both Catholic and otherwise will find “For Real?: Christ’s Presence in the Eucharist” worth reading slowly and thoughtfully.

Finley is the author of more than 30 books on popular Catholic theology, including “The Rosary Handbook: A Guide for Newcomers, Old-Timers and Those In Between,” “The Joy of Being a Eucharistic Minister” and “The Joy of Being Catholic.”