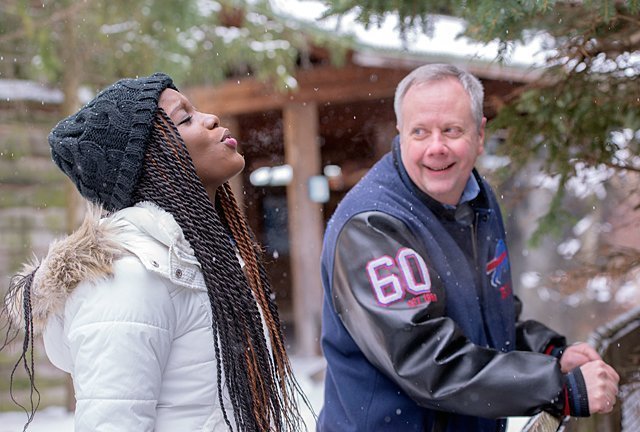 Shana Campbell, 17, exhales to see her breath during a visit to Rochester's Seneca Park Zoo with Deacon Kevin Carges Jan. 4. Deacon Carges is raising money for a surgery Shana needs due to wounds she suffered in a machete attack in her native Jamaica.

It’s an unlikely friendship, but it’s one that was meant to be.

That’s what Deacon Kevin Carges believes about his friendship with 17-year-old Shana Campbell, who two years ago survived a horrific machete attack in Jamaica.

"People come into our lives for a reason, and I don’t know why Shana came into mine," Deacon Carges said, noting that nonetheless, "God is working through Shana, and I know he has great plans for her."

The teen came into Deacon Carges’ life in January 2015 after a conversation he had with Sharon Campbell Danvers, principal of Davis Primary School in Old Harbor, Jamaica. Deacon Carges had contacted the principal to tell her that the group he helped found, Eight 4 World Hope, had raised enough money to fund the first phase of a major project at her school. During the course of their conversation Danvers asked Deacon Carges to keep her cousin, Shana, in his prayers. When Deacon Carges casually asked why Shana needed prayers, Danvers explained that in September 2013 her cousin had been brutally attacked by her own machete-wielding father.

Shana survived the attack but was left with scars all over her body and a tracheal tube in her throat. In January 2015 she especially needed prayers because she was suffering from a serious infection in her tracheal tube and the hospital she’d been treated at in Jamaica was unable to provide any further help, Deacon Carges said.

"As I heard the story, it was overwhelming to me," recalled Deacon Carges, who serves at Our Lady of Peace Parish in Geneva.

He was moved to take action and reached out to several doctors that he knew sometimes worked in developing countries, but they all said the surgery Shana needed was too difficult for anyone they knew to perform.

"I then just wrote letters randomly to various doctors asking for someone to help me," Deacon Carges said.

He mailed out 30 letters and received just one response, from Dr. Richard Constantino, who practices internal medicine at Rochester General Hospital and belongs to St. Benedict Parish in Canandaigua. Constantino enlisted the help of a colleague, otolaryngologist Dr. Robert Oliver, and together they began calling colleagues around the country in search of a doctor who could perform the complex surgery Shana needed.

"It took months of searching but finally we got a doctor. Dr. Robert Lorenz at the Cleveland Clinic agreed to help," Deacon Carges said. "The surgery is estimated at $55,000, but after hearing Shana’s story (the doctor and hospital) reduced the cost 35 percent to approximately $35,000." 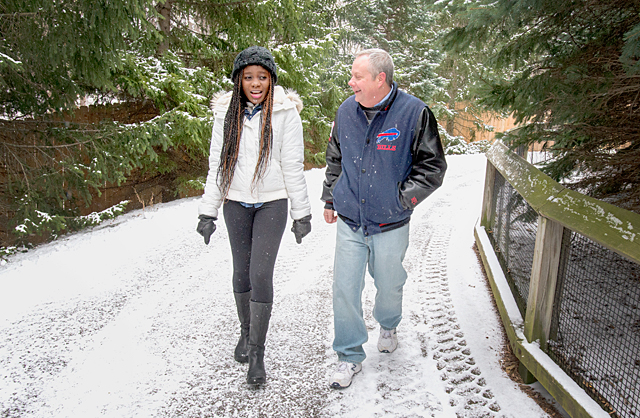 Shana Campbell and Deacon Kevin Carges walk together during a visit to Seneca Park Zoo in Rochester Jan. 4. Deacon Carges has been helping the 17-year-old get the surgery she needs at the Cleveland Clinic.

Shana traveled to the United States in December 2015 to meet with her new doctors and spend Christmas with Deacon Carges’ family. The doctors confirmed Shana is an excellent candidate for surgery, during which her surgeons will take a piece of her rib and insert it in her throat to cover the hole before placing a tube into her throat to open the airway, Deacon Carges said. The tube will be removed after five weeks, he added.

Deacon Carges currently is leading a fundraising campaign to raise enough money to cover the cost of Shana’s surgery, as well as future plastic surgeries to fix her many scars from the machete attack, he said. So far he’s raised about $15,000, and while the campaign still has a long way to go, its success thus far has inspired Shana, who returned to Jamaica on Jan. 9.

"She is back home and happy to know so many people care about her. She had lost hope, and we have given that gift back to her," Deacon Carges said.

Deacon Carges downplays his own role in bringing hope back to Shana, and instead focuses on the gifts she’s given to those who’ve been moved by her story and her courage. Shana doesn’t say much because she has to hold her finger over the hole in her throat in order to speak, but she has a sweet, shy smile that instantly endears her to people, he said.

"She brings a smile wherever she goes. She has such a big heart. She’s a beautiful soul, she really is," Deacon Carges said. "It’s very clear to me God is working through her. When I started doing this I said, ‘Well, I don’t know what I can do.’ I’m just a silly old guy, but God took over and started opening doors. God has a special plan for this one. I am blessed to be a part of it."