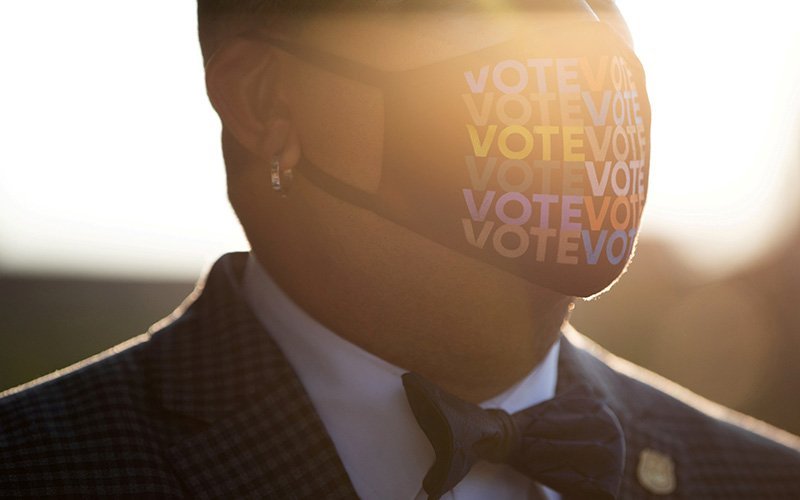 As nation awaits elections, tensions and fences rise around the country

DETROIT (CNS) — After studying all the election issues, praying about them and making a decision, “what better place is there for people to take their troubles than the Blessed Sacrament?” asked Deacon Joe Urbiel of Christ the King Parish in Detroit.

Christ the King was hosting all-day exposition of the Blessed Sacrament on Election Day, Nov. 3, concluding with benediction at 7:45 p.m.

“During this past year, all have been affected in some way by the pandemic, all the issues of civil unrest with the Black Lives Matter movement and the economy,” Deacon Urbiel said. “I don’t need to remind anyone how divisive this election has been.”

When talking heads, op-eds and online rancor have dominated much of the campaign season, Deacon Urbiel said spending time with the Lord can put the election into perspective.

“Prayer is such a powerful tool,” Deacon Urbiel told Detroit Catholic, the archdiocese’s news outlet. “We need to take what is on our heart to God. It’s always good for us to get consolation from God. He knows our problems, what we’re dealing with. He’s got our back.

“And we can only do that through prayer, reading the Scripture, discerning how our Lord wants us to vote, wants us to act,” he said. “This what the church should always be teaching.”

North of Detroit in Orchard Lake, SS. Cyril and Methodius Seminary was hosting 36 hours of adoration at the Detroit Archdiocese’s Shrine of St. John Paul II, inside the campus chapel. Adoration began Nov. 2 at 9 a.m. and was to end Nov. 3 at 9 p.m.

“We’re allowing people to pray in front of the Blessed Sacrament, to pray for peace in our nation,” said Father Przemyslaw Nowak, vice rector of the seminary. “We believe Jesus Christ is the Prince of Peace, that he is present in the Eucharist. So we humble ourselves in Christ, praying for the nation, the church, praying for peace.”

Father Nowak said the entire Orchard Lake campus is aware of the social division wrought by the pandemic, lockdowns and social unrest stemming from police-involved killings this summer. But spending time in prayer is a step toward peace, he said.

“We are giving people the opportunity to just have inner peace and be in the presence of the transforming power of Christ,” Father Nowak said. “The idea of 36 hours of adoration came from the people, who asked if we could do it. We have enough people signed up to cover the 36 hours, so people can come in whenever.

“God tells us in Scripture that when his people humble themselves and seek his presence, he will revive their land,” the priest continued. “We are humbling ourselves in front of Christ to reclaim our lives and trust in Jesus.”

Three days before Election Day, Alex Rovinski and hundreds of other Catholics were walking the streets of Detroit, proclaiming the kingdom of God.

Rovinski and an estimated 1,000 people took park in Unite Our Nation’s eucharistic procession Oct. 31, which was one of several opportunities for Catholics to pray for the nation ahead of the Nov. 3 election.

“We are having a eucharistic procession to reassert the primacy of Christ in the lives of the people of the United States,” Rovinski told Detroit Catholic while holding an American flag during the procession, which included stops at three churches for eucharistic Benediction.

“You can see how divided, how set at each other’s throats everyone is right now,” he said. “Christ is the one who unites; we need him now more than ever.”

Unite Our Nation, an apostolate founded by Catholic laity, has organized more than 140 eucharistic processions in cities and on college campuses across the country, a prayerful counterbalance to the rancor, division, rioting and social unrest that have dominated 2020 headlines.

Based in Milwaukee, Unite Our Nation set a goal of getting 1,000 U.S. parishes to hold adoration of the Blessed Sacrament events on Election Day.

“There is so much tension in our cities, so much tension and general anxiety of where things are going, how much conflict has been building,” said Darren O’Brien, state organizer for Michigan for the Unite Our Nation initiative. “This is a moment when we as a church can speak to the country about reengaging with Christ, really bringing praying to the forefront, bringing Christ to the streets.”

The Detroit procession began with with eucharistic Benediction at Our Lady of the Rosary Church, then made stops at Sweetest Heart of Mary Church and St. Joseph Shrine, where worshippers adored the Blessed Sacrament as the rector, Canon Michael Stein, led the prayers. Canon Stein is an ordained priest of the Institute of Christ the King Sovereign Priest; the order uses “Canon” as the title for its priests.

Unite Our Nation being a lay-led Catholic movement only increases its impact in creating a sense of Catholic citizenship in the country and bringing a healing presence in a divided nation, O’Brien said.

“At the center of all of this is a longing for this connection with Christ,” O’Brien said. “We are experiencing a sense of anxiety in how far we have fallen away as a people. Processions like these are really powerful because they bring out in the open a sense of awareness of how much we hunger for this relationship, this experience with Christ.

“The energy we receive from this connection to Christ leads to a connection to the larger community, a community that is centered and based on love for one another,” he added.

Many more churches were hosting vigils, holy hours and eucharistic prayer services to help Catholics discern the choices they faced in the voting booth, as well as to pray for the soul of the nation after either President Donald Trump or former Vice President Joe Biden is declared a winner of the presidential contest.

“I think people need to think of themselves as Americans first and their political alignment second,” Rovinski said. “We are all in this together. We all have to live with each other whether we like each other or not. When we sit down, work together and find common ground, rather than focus on the things that set us apart, we can find out that dialogue is possible.”

Meloy is a staff writer for Detroit Catholic, the online news platform of the Archdiocese of Detroit.