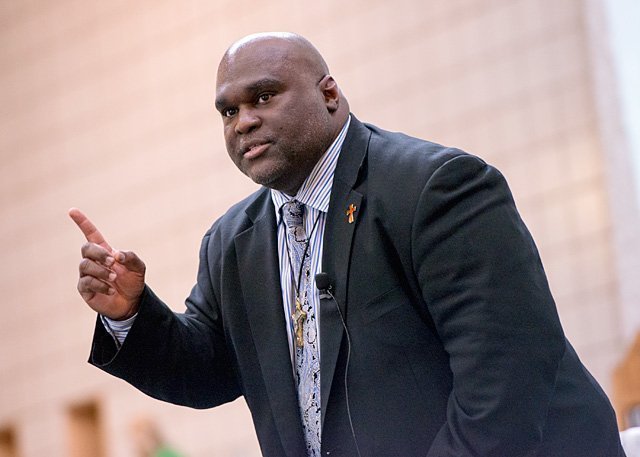 Amid an increasingly self-involved culture, today’s young people face a barrage of obstacles when it comes to living out the Catholic faith, according to a Catholic speaker promoted as the "Dynamic Deacon."

"We live in a culture consumed with the self," Deacon Harold Burke-Sivers of Portland, Ore., told the Catholic Courier Sept. 21. "The culture works as the trinity of me, myself and I. Because of that, self-gratification (is) the norm. ‘If it feels good, do it’ is the motto of the culture. But that goes against our way of thinking in the Catholic world, which is not about me but about how I make a gift of myself to someone else."

During his first-ever visit to the Rochester Diocese in early October, Deacon Burke-Sivers is scheduled to give a presentation on teens and chastity as part of an Oct. 2 retreat for confirmation candidates and their parents at St. Francis & St. Clare Parish in Waterloo. On Oct. 1, he is scheduled to be a keynote speaker at the second-annual Rochester Catholic Men’s Conference.

"Confirmation gives us the grace of the Holy Spirit to control those passions and urges which turn us away from others and toward ourselves," he told the Courier.

In a world where it is socially acceptable to be "friends with benefits," guiding young people to follow the moral teachings of the faith is an urgent issue for the church, Deacon Burke-Sivers noted.

"Letting passions and feelings control us is the antithesis of how we’re supposed to live as Catholics. … We have to teach them that they’re going to get confirmation, but that it is not Catholic ‘graduation’" he said, referring to the need for lifelong formation as Catholics. "Confirmation gives them graces they can draw from. They can use that grace to be able to live in the way that Christ asks us to live. … I’m hoping one of the things I show them is how to access that grace."

After St. Francis & St. Clare recently retooled its confirmation-preparation program, Tam Kane, a faith-formation assistant at the parish, sought a speaker on chastity and sexuality for a parish confirmation retreat this fall.

"He had set my heart, already on fire, even more on fire," Kane remarked.

She then learned that the deacon already was scheduled to be in Rochester for the men’s conference and asked him to speak during the confirmation retreat.

"That to me was like the work of the Holy Spirit," she said, noting that the parish was fortunate to be able to bring in an international speaker like the deacon thanks to that good timing and an anonymous donation.

In a telephone interview, Deacon Burke-Sivers told the Courier he will focus his talk with the Waterloo confirmation candidates and other teenagers on the following issues:

* The importance of treating our bodies as temples of the Holy Spirit.

* The gifts of confirmation include the capacity to gain spiritual self-mastery and leading one to a greater conformity to Christ.

* Virtues aren’t just good ideas but are lived out during times of temptation.

Deacon Burke-Sivers said that during his presentations, he provides real-world examples to help teenagers understand those ideals.

For example, he said he points out that some of the couples he sees for marriage preparation at his parish have been living together before marriage.

"They see it as no big deal because it’s the 21st century, and the church is behind the times," Deacon Burke-Sivers said, adding that he tries to help these couples realize that marriage is not an occasion to take wedding pictures but is a sacrament of the church.

"I ask them to think deeply and seriously about their current situation, but it’s not to judge them," he noted.

So, during the confirmation retreat, he said he will choose a girl and a boy to portray a couple who has been living together, and he plans to walk through the kind of marriage-preparation exercise that he would for such a couple. Through discussion about preparing for a sacrament meant to last a lifetime, he said teens come to understand this is not the choice that God wants for them.

"The reason this (example) is so powerful is they realize you have the grace within you" to make the right choice, Deacon Burke-Sivers said. "Instead of listening to the voice of the culture, listen to the voice of God. That’s the voice that can truly change our lives."

The deacon said he also explains that the sooner a person starts to continually make choices to live a virtuous life, the more likely he or she is to develop the kind of spiritual "muscle memory" that will help throughout his or her life.

"In sports, the reason you do drills over and over again is because you’re training the body to respond in a certain way. It’s the same with virtue … so when we get in a situation, our hearts and souls will know how to react," Deacon Burke-Sivers explained.

Teenagers can start small, he said, with how they use their cell phones. For young men, this is especially significant so they don’t fall into the trap of pornography so easily accessible online or on their phones.

"How do you teach them to not see women as objects for pleasure and gratification? They need to seek God’s grace in the sacrament of reconciliation and the Eucharist. … And of course, they have to pray," Deacon Burke-Sivers said.