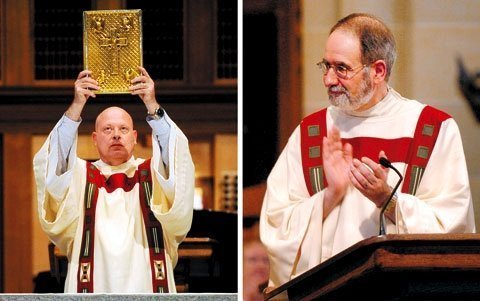 Deacon John Brasley began Aug. 8 as the diocesan director of deacon personnel and formation. He succeeds Deacon David Palma, who had directed deacon personnel since 2000 and deacon formation since 2006. Deacon Palma has moved on to become pastoral administrator of the newly formed St. Frances Xavier Cabrini Parish — a combination of churches on the city of Rochester’s east side — beginning in late June.

Deacon Brasley had worked in the diocesan Office of Parish Support Ministries since 2003, the same year he was ordained to the permanent diaconate. His many duties included coordinator of the department’s urban, health-care and jail-ministry programs; liaison to the Office of Liturgy; and officer for ecumenical and interreligious affairs.

In his new personnel role, Deacon Brasley oversees more than 100 active deacons. He noted that his chief responsibilities are "helping find a good fit for the deacons and their ministries, and make the best use of their resources."

"At one time, they were assigned to their home parish. Now, we look to see where the greatest need is," he explained.

Deacon Brasley now also directs the four-year deacon formation program through St. Bernard’s School of Theology and Ministry, which he calls "one of the best in the country."

He added that he’s eager to get started with his new duties, remarking that when Bishop Matthew H. Clark invited him to accept the position "I was thrilled."

"I think John’s a great guy and he’ll do very, very well," Deacon Palma said, noting that Deacon Brasley’s diversity of experience will serve him well: "He comes with a really good handle on the whole diocese. He brings many gifts."

Deacon Brasley had similarly high praise for Deacon Palma, who at 11 years was the longest-tenured director of deacon personnel in diocesan history.

"David Palma did so much for our deacon community. He’s organized, compassionate, thoughtful, patient — everything you would want in a director of deacon personnel," Deacon Brasley commented.

Deacon Palma, who was ordained in 1990, is enthused about his new position as an inner-city parish administrator.

"It was something I had felt called to," he said, noting that he has prior experience in migrant and urban ministry: "Obviously I have a real love in my heart to be with the people, to be walking the journey with the people of God in a multicultural setting."

Deacons Palma and Brasley both described being head of diocesan deacons as a cherished role, based on the quality of folks in their ranks. They pointed out that their fellow deacons spend countless hours engaging in ministries involving parish work, health-care ministry, prison ministry, soup kitchens, clothing closets, urban ministry, ecumenical relations, rural ministry, disaster relief and support of Third World counties.

"It’s an honor and privilege to serve (as director) the deacons, their wives and families — and also somewhat humbling, when I think of all their ministries of service," Deacon Brasley said.

For Deacon Palma, the top personal highlight of his directorship has been "getting to know all of the deacons and just the incredible ministry they do in our diocese. It was an amazing blessing. They’re humble guys, and they do so much on so many levels. They just go about being Christ the servant, which is what all deacons are ordained to be. They do it with such courage and humility."

Deacons Palma and Brasley observed that this branch of ordained ministry has fulfilled many hopes and expectations from when permanent deacons were first ordained in this diocese in 1982. On the other hand, "Even though we’re celebrating 30 years soon, in terms of church time we’re still in our infancy and we’re still living and learning (this ministry)," Deacon Palma said.