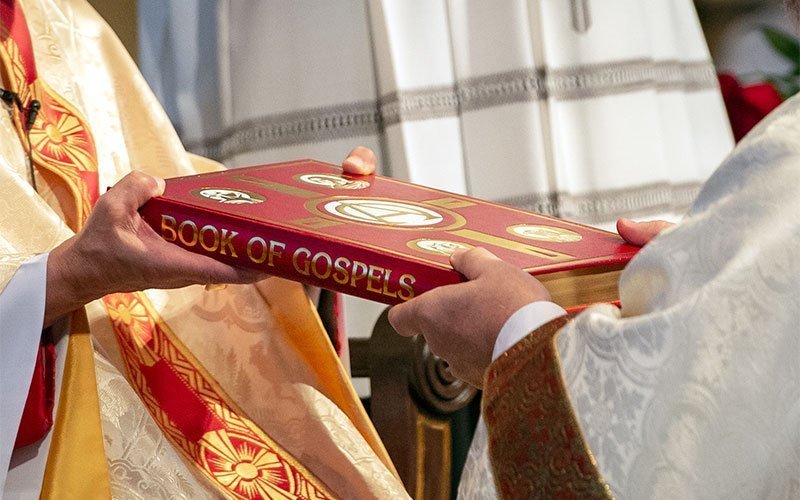 Deacon Owen Bowers recalled that his path to pursuing the diaconate began in 1982, during a parish renewal weekend at his home parish of St. Agnes in Avon.

“That really was a changing point,” he said, noting that he subsequently began reading Scripture and “volunteered for just about everything imaginable in the parish.” From there, he said, entering the diaconate “seemed like a natural progression. That whole sense of being called to serve was appealing to me.” Deacon Bowers added that the late Father Charles Bennett, former St. Agnes pastor, was a key mentor and supporter.

Deacon Bowers served at St. Agnes for the first 10 years after ordination, followed by assignments at St. James, Irondequoit; St. Joseph, Rush; St. Columba/St. Patrick, Caledonia/Mumford; and the State Agricultural and Industrial School in Rush. He reached senior status in 2009.

Recalling his years in active diaconal ministry, Deacon Bowers said, “The preaching was a big thing for me, and the close contact with the local community.”

A native of Buffalo, Deacon Bowers served in the U.S. Army from 1954-55, becoming a sergeant. He was a New York State Trooper from 1962 until his 1983 retirement, also rising to the rank of sergeant. He and his wife, Irene, have six children, 18 grandchildren and eight great-grandchildren, with a ninth due in June.

“I have been blessed greatly,” Deacon Daniel Hurley remarked regarding the many roles he has held, both in his full-time career and his diaconal ministry.

Deacon Hurley is a graduate of East High School in Rochester. He earned a bachelor’s degree in Spanish from St. Bonaventure University and a master’s degree, also in Spanish, from SUNY Binghamton. He received his certification in educational administration from Boston College.

Deacon Hurley taught at Elmira Notre Dame High School, served as principal of St. Mary Our Mother in Horseheads and Immaculate Conception in Ithaca, and also worked in the Spencer-Van Etten School District.

In addition, he served as pastoral administrator of St. Michael/Our Lady of Perpetual Help churches in Rochester, and for the past five years has been full-time chaplain at Mid-State Correctional Facility, a medium-security prison near Utica in the Diocese of Syracuse.

He also has served at St. Mary Our Mother, Horseheads; Schuyler Catholic Community, Watkins Glen/Odessa; Cornell University, Ithaca; and All Saints, Corning/Painted Post. Deacon Hurley is currently assigned to Ithaca’s Immaculate Conception Parish, where he assists approximately every other weekend.

He and his wife, Joan, have three children and four grandchildren.

With no background in ministry, Deacon Tony Caruso wasn’t sure he had the chops to be a permanent deacon, But he felt differently after a chat with his father-in-law.

“He jokingly said, ‘Of the 12 guys Jesus got for apostles, there were some fishermen, a tent maker and a tax collector. I think the Lord could put up with you,’” Deacon Caruso recalled.

Deacon Caruso is a graduate of Rochester’s John Marshall High School. He worked for DuPont for four years and then spent 25 years at Eastman Kodak Co., serving as a machinist supervisor and retiring in 1991.

Following his 1994 ordination, Deacon Caruso served as deacon at his home parish, St. Theodore in Gates until 2006. He then logged three years at Henrietta’s Church of the Good Shepherd until reaching senior status in 2009. He continues to perform chaplaincy duty at Strong Memorial Hospital, a role he has held since 1995. In addition, he was chaplain at Monroe County Children’s Center from 1994-2017.

Presiding at weddings and baptisms have been among his favorite activities as a deacon, “bringing couples together and bringing young ones into the Lord’s nest,” he said.

He and his wife, Mary Ann, have three children and four grandchildren. They spend their winters in Bonita Springs, Fla., and Deacon Caruso still assists at St. Theodore when in town.

After a lengthy career as an electrical engineer and educator, Deacon Ron Tocci discovered a whole new world in diaconal ministry.

A native of Utica, Deacon Tocci earned a bachelor’s degree in electrical engineering from Rensselaer Polytechnic Institute. In Rochester, he worked in that field for Eastman Kodak Co. and Xerox Corp. before becoming a full-time technology professor at Monroe Community College, where he taught from 1967-90. He also wrote several textbooks.

Following ordination, he served from 1994-2007 at his home parish, Fairport’s Church of the Assumption. Since 2007, he has been a chaplain at Rochester General Hospital, continuing in that role after reaching senior status in 2017. He also has been active in social-ministry efforts.

Deacon Tocci and his wife, Catherine, have three children and two grandchildren. He continues to enjoy ministry, assisting frequently at his parish.

He said his ongoing fondness for the diaconate is fueled by the folks he meets, such as in hospital chaplaincy, where “I learn so much from how I see people handle serious illnesses or struggles,” and representatives of inner-city organizations “devoting their lives trying to bring people up out of bad living situations.”

Deacon Ron Verkon has served outside the Rochester Diocese for 23 of his 25 years as a deacon, remaining active in the Diocese of Scranton, Pa., throughout that time.

A native of Kenosha, Wis., Deacon Verkon moved to Buffalo as a child. He served in the U.S. Navy and attended Canisius College before graduating from the University of Detroit with a bachelor’s degree in electrical engineering. He was an engineer for Corning Inc. from 1964-96, settling in the Corning area in 1969. He was ordained a permanent deacon out of the Corning-Painted Post Roman Catholic Community, now known as All Saints Parish.

In 1996, he moved to the Pocono Mountain area and began serving as deacon at St. Bernadette Parish in Canadensis, which since has become part of Most Holy Trinity Parish in Cresco. Over the years, his primary ministry has been visiting the homebound as well as patients in hospitals and nursing facilities. He continues to assist regularly at the parish, and although he has reached senior status, “I’m retired only in name,” he said.

Commenting on his diaconal ministry, Deacon Verkon said, “I absolutely have enjoyed it. God directed me there, and I just thank him every day for it.”

The following deacons also are celebrating their anniversaries of ordination this year: