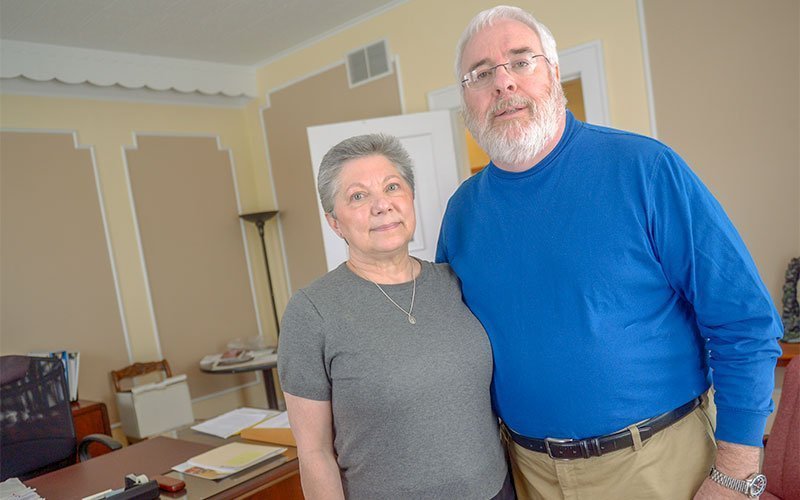 In Deacon Ed Giblin’s experience, not everybody who aspires to the permanent diaconate initially realizes the full breadth of that vocation.

“I ask guys, ‘What makes you want to be a deacon?’ They say, ‘I see them sit next to Father, and I can preach.’ I’m like, ‘Do you know what else they do?’” remarked Deacon Giblin, director of the diocesan Office of the Permanent Diaconate.

Deacon Giblin emphasized that a deacon’s role is “a threefold mission of liturgy, word and charity.” The third part, he said, is often less visible but no less important.

As he scanned a directory of deacons from the Diocese of Rochester, Deacon Giblin noted a wide range of special ministries they perform in addition to their roles at Sunday Mass and weddings, baptisms and funerals. For instance, several permanent deacons are serving or have served as chaplains at state prisons and county jails.

Additional chaplaincies have been located at hospitals, other health-care facilities and college campuses. Other deacons throw themselves into social-ministry efforts to support the impoverished: migrants and refugees, inner-city poor and homeless, people affected by violent crimes, folks suffering from rural poverty, those in other countries.

Deacons in this diocese also minister to such specific communities as Hispanics, Filipinos, Vietnamese and the hearing-impaired. They are involved in pro-life efforts, serve on parish staffs and perform ministry for such charitable organizations as Catholic Charities and Catholic Relief Services.

Through all these vital types of ministries, permanent deacons serve as connectors between parishes and the society at large, Deacon Giblin observed.

“That is so much a part of what a deacon does — to give the church’s witness in the community, and to bring the needs of the community to the altar,” he said.

The deacon director added that having spent a good deal of their lives in the business community, deacons frequently blend career experiences into their ministerial roles. “Some of them bring those talents they’ve honed in secular occupations — organization, fundraising, team-building — which they can all put to use in their ministry,” he said.

When Deacon Dennis Donahue was ordained 10 years ago, for example, he had already logged a lengthy career as a psychologist and administrator. Upon being assigned to minister in Auburn, his pastor, Father Frank Lioi, “said to do what I’m good at,” Deacon Donahue recalled. Utilizing his professional and organizational skills, Deacon Donahue launched a new evangelization ministry, striving to re-engage Catholics in their faith through various spiritual and social activities.

Out of that evangelization effort has developed the Blessed Solanus Casey Doorway Ministry, which opened in October 2018 at the Ss. Mary and Martha parish office. The ministry, which Deacon Donahue conducts along with his wife, Cindy, is modeled on employee-assistance programs with a strong spiritual component added in.

“Most of the people don’t have a psychological issue. It’s more a loss of meaning in their life, a loss of a sense of God. They’re feeling uneasy in life and don’t know why,” said Deacon Donahue, who serves as deacon at Ss. Martha and Mary as well as St. Mary Parish in Auburn. More often than not, he said, he simply listens to the folks who visit him, and from there they are able to devise their own approaches for dealing with struggles.

Another person who has blended his professional background into diaconal ministry is Deacon Dan Hurley, who holds bachelor’s and master’s degrees in Spanish. He currently serves as chaplain at Mid-State Correctional Facility near Utica, where he said a sizable number of Hispanic inmates are housed. Thus, Deacon Hurley is able to offer such spiritual opportunities as rosaries, homilies and Divine Mercy services bilingually.

Earlier in his ministerial life, Deacon Hurley — who this year is celebrating his 30th year in the permanent diaconate — also put his proficiency in Spanish to use as pastoral administrator at Rochester’s St. Michael and Our Lady of Perpetual Help churches, both known for large concentrations of Spanish-speaking worshipers.

Deacon Hurley added that his background in a variety of other roles — teacher, school administrator, coach, athletic official — has enhanced his diaconal ministry. And yet, he said, the nature of a deacon’s work might also mean being called to serve in areas where one has little or no experience.

“You go where the need is, and you go to serve,” Deacon Hurley said. “I’ll tell you what — I never thought I could do prison ministry; it just didn’t fit with me. I think you just have to give in to whatever whisper God is putting in your ear. And right now I feel pretty strongly about the kind of ministry I’m doing. It’s where I should be.”