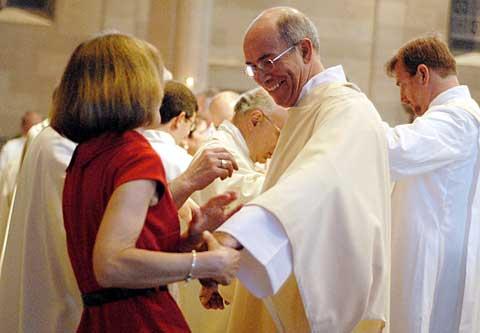 Deacon Mark Joseph Bovenzi is helped by his wife Marcia as he puts on his stole and dalmatic during the June 5 deacon ordination Mass at Rochester's Sacred Heart Cathedral. (Click here to view more photos from this event and/or buy prints.)

ROCHESTER — For all of the great sights on June 5 — a packed Sacred Heart Cathedral, numerous clergy in attendance — one of the most profound segments of that day’s liturgy occurred when nine men couldn’t see a thing.

That’s when they lay prostrate for several minutes, encircling the altar, during the Litany of the Saints just before being ordained to the diaconate. Later, in the moments after Mass as they accepted congratulations from family and friends, many harkened back to that striking scene of prostration, during which the congregation and Diocesan Festival Choir prayed for the intercession of numerous saints while they remained face down and silent.

"I recognized that several special people, including my father and in-laws who are not physically with us, were represented in spirit," remarked Deacon Raymond Garbach of St. Joseph Parish in Penfield.

"I thought of all the living and deceased saints, the community, my family and deceased relatives. I really felt their presence," added Deacon Mark Bovenzi of Christ the King in Irondequoit.

Deacon Thomas Uschold of St. Jude the Apostle in Gates said he cherished the Litany of the Saints for “really being able to let the Holy Spirit sink in.”

"God calling all these people down on me — I had an enormous sense of peace and tranquility,” was how Deacon Joseph Erway of St .Mary Southside in Elmira described the experience.

Deacon Peter Dohr, of St. Paul of the Cross in Honeoye Falls, called the Litany of the Saints a humbling moment: “Lying there on the floor, it really struck me how we have this mission of service.”

Shortly after the men rose off the floor, they knelt one at a time in front of Bishop Matthew H. Clark, who in laying his hands on their heads officially sealed their ordination as deacons — eight permanent and one transitional — of the Diocese of Rochester. It was this rite that marked Deacon Paul Sartori’s top moment of the day.

"I can’t even describe the emotion I was feeling,” said Deacon Sartori of Blessed Sacrament in Elmira.

Meanwhile, Deacon Patrick DiLaura said a personal highlight occurred when Bishop Clark consecrated the body and blood of Christ later in the Mass.

“I just felt the spirit washing over me,” recalled Deacon DiLaura of Church of the Assumption in Fairport.

And Deacon Lon Smith of Our Mother of Sorrows in Greece said his top memory was not a particular occurrence, but the presence of such a large congregation.

“Just the community that comes together — that’s the most important thing to us. It’s a real blessing to see so many people come out and support us,” he said.

Deacon Smith and his cohorts ascended to their positions as deacons following years of preparation through studies and field ministry. Now they will set forth assisting and preaching at Masses in their parish communities; visiting health-care facilities and prisons; presiding at baptisms, weddings and funerals; conducting specialized ministries; and generally offering spiritual support and advancing the word of God.

Bishop Clark alluded to their vocational call during his homily at the June 5 Mass, saying that we all share the responsibility to embrace service to God “as we best know this call.” The bishop added that the newly ordained deacons serve as models for freely giving of one’s self, and he also acknowledged the sacrifices that wives and other loved ones have made in supporting the deacons in their vocation.

One of the most intriguing story lines at the June 5 Mass was the ordination of Deacon Scott Caton, of Our Lady of Victory/St. Joseph in Rochester, as a transitional deacon. A convert to the Catholic faith who is married with six children, Deacon Caton is scheduled to be ordained a diocesan priest in 2011. The professor at Roberts Wesleyan College noted that his pursuit of the Catholic priesthood began 10 years ago, but he only received official Vatican approval in early May to become a transitional deacon.

“Then, for two or three weeks I was going bananas,” he said, referring to his hasty preparation for the deacon ordination Mass.

There are no priests being ordained in the Rochester Diocese in 2010. However, the eight-member class of permanent deacons is the largest here in many years. The diocese now has more than 100 men active in that role.