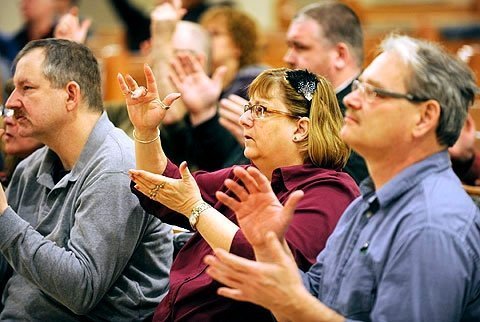 Above, Emmanuel Church of the Deaf parishioners sign along with Father Ray Fleming during a Feb. 26 Mass. Below, Deacon Patrick Graybill signs during the same Mass.

ROCHESTER — At a recent Sunday Mass at Emmanuel Church of the Deaf in Rochester, one of the world’s foremost experts on Catholic American Sign Language (ASL) translation led a homily on the newness of Lent.

As Deacon Patrick Graybill signed to the predominantly deaf congregation, a voice interpreter translated his message on how Lent provides an opportunity for new beginnings.

Deacon Graybill, who serves as deacon at Rochester’s Emmanuel Church of the Deaf based at St. Monica Church, has been one of the leaders of ongoing national efforts to train interpreters, congregations and ministers on how to interpret the new English translation into ASL. He is the narrator of a popular video series illustrating some of the changes on the website of the Archdiocese of Washington, D.C.

The video series, which has attracted Web visitors from around the world, originated last year from a collaboration of pastoral workers around the country who serve deaf and hearing-impaired Catholics, said Mary O’Meara, executive director for the department of special-needs ministry for the Washington Archdiocese.

The Rochester deacon was chosen to narrate because of his decade of acting experience with the acclaimed National Theater of the Deaf, his time as a professor at the National Technical Institute for the Deaf in Rochester and his expertise in translating fixed texts into ASL.

"Our translation process begins with understanding the meaning of the message and then reformulating it in the target language — the language of the specific audience," Deacon Graybill said in an e-mail to the Catholic Courier.

Prior to filming the video, several ministers to the deaf community traded ideas about the new translation via video phone and e-mails. Once they met in person, they briefly conferred over two days and then arrived at the interpretation that was filmed. The rapid translation led Deacon Graybill to refer to the effort as a first draft to be refined in dioceses around the country.

"We did not have time to test the audience and polish our translation work," he noted in his e-mail.

The series is one of several video resources that have been or are being produced on the new translation. For instance, the National Catholic Office of the Deaf later this year hopes to release a DVD of religious sign language that incorporates the ASL interpretation of the new English missal translation, said Eileen Colarusso, president of the office’s board of directors and director of deaf ministry in the Archdiocese of Baltimore.

Numerous conferences also are focusing on the changes in the missal. The National Catholic Office for the Deaf’s 2012 Pastoral Week Conference in January included a workshop on changes related to Lenten prayers and the Triduum. The missal changes also will be discussed during the first-ever deaf track at the International Eucharistic Congress June 10-17 in Dublin, Ireland, and will be the focus of the National Catholic Office of the Deaf’s Religious ASL Week July 15-20 in the Diocese of Rockford, Ill. Deacon Graybill will be one of the instructors for the Rockford gathering.

Locally, Deacon Graybill led workshops last fall to prepare interpreters and the congregation of Emmanuel Church of the Deaf for the new translation. Out of these workshops grew a support group for local interpreters, called Roman Catholic Liturgical Interpreter Professional Development, that aims to support interpreters’ professional development and address issues that arise.

Although some changes to the English translation did not change the meaning of prayers or, therefore, the signs used in the ASL interpretation, O’Meara said some language was revised to include a greater degree of formality. One example is the change from the common sign for cup to a more formal sign for a chalice, which outlines the shape of the vessel.

"Now it’s a group of angels on high, which is probably the best translation of ‘hosts’ that we could come up with," Father Fleming said.

One local interpreter said she benefitted greatly from preparation for the introduction of the English translation of the new Roman Missal. NTID interpreter Holly Jentsch of Henrietta, who interprets weekly at St. Catherine of Siena Parish in Mendon, said the interpreter training sessions in the fall helped her better understand the Mass.

"(The workshops) were amazingly helpful," she said.

Deacon Graybill said this increased attention to the needs of deaf Catholics has been a blessing. In the past, he noted, deaf Catholics sometimes were scattered and isolated from the rest of the Catholic community as changes occurred in the life of the church.

"We are seeing something new and hopeful in the progress," he said.

EDITOR’S NOTE: View the video with Deacon Patrick Graybill as the narrator at www.adw.org/service/interpreter_training_newromanmissal.asp.