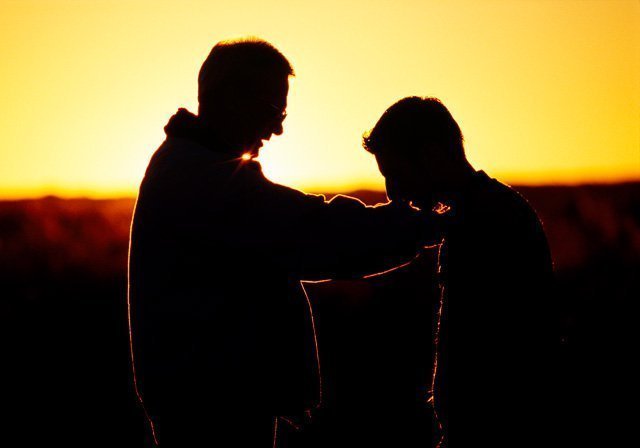 Patrick Meyer had been vaguely aware for some time — years, actually — that he wasn’t feeling quite right.

However, "If you had asked me, ‘What is wrong with you?’ I wouldn’t have been able to say," he recalled.

Beginning three summers ago, Meyer, 47, found it increasingly difficult to get out of bed or off the couch. After 17 years of teaching eighth grade at a Catholic school in Cincinnati, he was dreading the approaching school year.

"It got to the point where I couldn’t answer the phone. I looked for excuses not to do things, rather than do things," Meyer said.

"At the lowest of the low points, I would go to bed at night and pray that I not wake up in the morning," he added. "The morning would come and I would be angry at God — ‘Do I have to go through another day?’"

He said experiencing this level of debilitation finally drove home the reality that he was clinically depressed.

Meyer left his teaching job a few months into the school year. But thanks to professional help and various coping strategies, he says he has gradually become more adept at managing his depression. In July 2013 he became pastoral associate at Immaculate Conception Parish in Ithaca, a position he still holds and he says is "going very well."

Through his experiences, Meyer said he now appreciates the importance of seeking help for depression, even if it means overcoming reluctance to take initial steps.

"We limit ourselves because we don’t know what to do; we begin to tell ourselves this is how we’re supposed to feel," he said.

Meyer added that social stigmas about mental disorders deter many depressed people from coming forward and getting the help they so badly need.

"Depression implies a weakness, when the reality is that to acknowledge it is a strength, a gift," Meyer said.

According to the National Institute of Mental Health (NIMH), approximately 6.7 percent of all adults in the United States endure major depressive disorder, also known as clinical depression, at any given time. NIMH notes that the average age of onset is 32, but that depression can strike children, teens and senior citizens as well, with women being more prone than men to depression, which often runs in families.

The National Alliance on Mental Illness (NAMI) states that any major depressive episode lasting more than two weeks warrants a diagnosis of depression. Symptoms include a loss of interest or pleasure in numerous activities; change in appetite or weight; disruption of sleeping habits; feelings of being agitated, slowed down or fatigued; feelings of guilt, shortcomings or low self-worth; struggling to concentrate or make decisions; and thoughts or intentions of committing suicide.

NAMI notes that depression can be triggered or may occur spontaneously, and can be fueled by such factors as trauma, genetics, life circumstances, brain structure, medical conditions and drug and/or alcohol abuse. NIMH adds that depressive symptoms vary by person in nature, severity, frequency and duration.

Meyer said a good gauge of major depressive disorder is the degree to which regular daily activities can — or can’t — be completed.

"If you are utterly depressed, everything becomes a chore," he remarked, adding that to be in such a state is "excruciating — to try to put words to it is doing it an injustice. You have to just experience it." People who have reached this level of depression, according to NIMH, should consult a physician or mental-health specialist.

However, Father Robert Werth, copastor of Rochester’s St. Frances Xavier Cabrini Parish, told the Catholic Courier that because stress and anxiety are regular parts of life, clinical depression is often difficult to diagnose.

"It could simply be sadness. Depression can be a catch-all phrase. You may be hungry, angry, lonely or tired," said Father Werth, who was a professional social worker before becoming a diocesan priest in 1979. 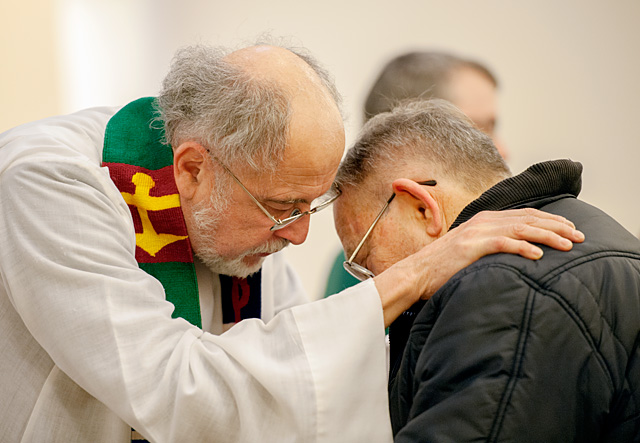 Father Robert Werth, shown blessing a parishioner during a 2014 Mass at Rochester’s Church of the Annunciation, said he’s worked with many depressed people as a priest and, previously, as a social worker.

Whether one has severe depression or is simply feeling blue, having reliable outlets available is vital, Father Werth stated Aug. 4 at The Old Toad in Rochester.

"If we name our pain, it begins to lose some of its power just by naming it," Father Werth said during the diocesan-sponsored Theology on Tap gathering of young adults. "When I talk to someone and the anxiety or depression comes out, it’s less likely to show itself in other ways."

Father Werth noted the existence of "spiritual hungers," which include the need for life to be meaningful; a longing for community and deeper relationships; and the desire to be appreciated, respected and heard.

"When we don’t have any outlet to deal with these hungers, of course we’re not going to be happy. We’re going to end up feeling depressed," Father Werth said.

He called for a mutual willingness among people to engage in intimate sharing rather than settle for safe conversation: "To whom can you speak to about these things? Sharing brings us more toward inner peace. We must find each other," he said during his Aug. 4 presentation.

In Meyer’s case, coming forward about his depression was easier said than done. He likened his plight to that of Robin Williams, noting that both were public figures — he a teacher, Williams an entertainer — who lived in fear that their depression would become widely known. Williams, who had a history of severe depression, committed suicide on Aug. 11, 2014.

Adding to Meyer’s hesitation was what he considered a societal intolerance toward depression — an attitude by others of, "’Just pull yourself up, let’s go,’" Meyer remarked.

Father Werth emphasized that depressed people should instead be viewed "as they are, not as we want them to be," which in turns brings about greater compassion and listening skills.

"We don’t get into judging these situations of how people should live — ‘This person is normal, abnormal, depressed.’ You just deal with it," he said.

Among the treatment options NAMI suggests for dealing with depression are medications — carefully prescribed and taken — as well as professional therapy, exercise, education, self-management strategies, and spirituality and prayer.

Meyer’s path toward overcoming depression started with a physician’s diagnosis that he had a chemical imbalance in the brain — common among people who are severely depressed. He was prescribed medication and also began seeing a therapist.

In addition, Meyer started opening up about his depression with family and friends — and was pleasantly surprised that he received much greater support than he’d anticipated.

"Nobody criticized me for saying it; there was nothing negative. The more I did start explaining the truth to people and the more they were accepting, I realized I was stigmatizing my own illness and projecting how they were going to react. And that’s not fair," he said.

In an Aug. 24, 2014, bulletin article for Immaculate Conception Parish, Meyer encouraged people to appreciate God’s gifts while acknowledging that "as someone with a personal history of depression, I know it’s not always easy to see the world — or life — as a gift." More recently, in the May 10, 2015, bulletin, he noted that his late mother also had suffered from depression.

Meyer said he doesn’t believe his depression — or his public acknowledgement of it — have negatively affected his job performance, saying that he feels well-respected and accepted by the parish community in Ithaca.

In fact, Meyer noted that his personal experience has enabled him to better assist parishioners who struggle with depression themselves.

"’I know what you’re going through’ — I can say that and mean it," he said. "I guess I look at myself as a decent individual, flawed and all, doing the best he can. (My life) is not perfect and it never will be. But if this decent individual with flaws can touch lives in a positive way, then so can we all."

And Meyer said much of his improvement has been derived from his Catholic faith.

"I will never be over depression," he stated. "I think the difference is, when I feel the clouds come, I’ve found ways that are more healthy to cope — mainly knowing Jesus is walking this journey with me and I’m not alone."

Is he happy now?

"To say I’m embracing a general happiness, I don’t know yet. Time will tell," Meyer said. "But I’m in a markedly better place than I was a couple of years ago."