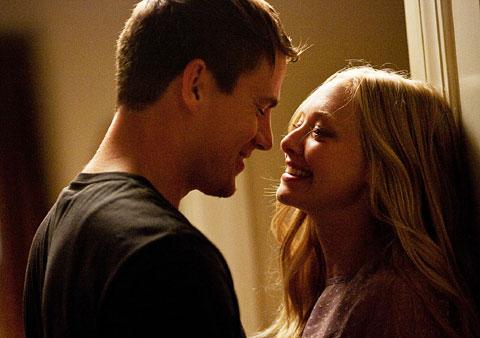 Channing Tatum and Amanda Seyfried star in a scene from the movie "Dear John." (CNS photo by Sony Pictures)

While the outside strains on the central relationship in director Lasse Hallstrom’s adaptation of Nicholas Sparks’ best-selling 2006 novel may be all too realistic — including as they do the 9/11 terrorist attacks and the subsequent wars in Afghanistan and Iraq — the characters’ reactions to them, at least in a few crucial cases, come across as emotionally off-key.

As John’s return to duty looms, the two resolve to maintain their newfound bond by an exchange of detailed — and always honest — letters.

But then John’s plans to leave the Army at the end of his enlistment — less than a year away — are suddenly scuttled by 9/11. He uses a brief furlough to visit Savannah, who fumes over the situation (“How dare that Osama bin Laden do this to me!” her face seems to say), and quarrels with him.

They make it up by consummating their attraction in an encounter the film handles discreetly, but also unmistakably endorses.

The crisis that follows once John departs again — revealing its precise nature would constitute a spoiler, though those old enough to remember the slang of earlier conflicts may take a hint from the title — sees Savannah behaving in a way that seems unlikely and inauthentic.

By contrast, the portrayal of John’s conflicted filial feelings for his dad — an isolated figure who devotes all his time and attention to his extensive coin collection, and who eventually suffers a crisis of his own — is moving.

Despite John and Savannah’s premature physicality, Jamie Linden’s script does have its moral strong points, perhaps reflecting Spark’s religious values as a practicing Catholic. Thus Savannah devotes her vacation days during spring break to rebuilding a neighbor’s home, and dreams of opening a summer camp for autistic children. And John, who clearly appreciates Savannah’s sensitivity, is shown to have a violent temper that he struggles to control.

The film contains nongraphic premarital sexual activity with partial nudity, a few uses of profanity and at least four instances of the S-word. The USCCB Office for Film & Broadcasting classification is A-III — adults. The Motion Picture Association of America rating is PG-13 — parents strongly cautioned. Some material may be inappropriate for children under 13.