Death at a Funeral - Catholic Courier 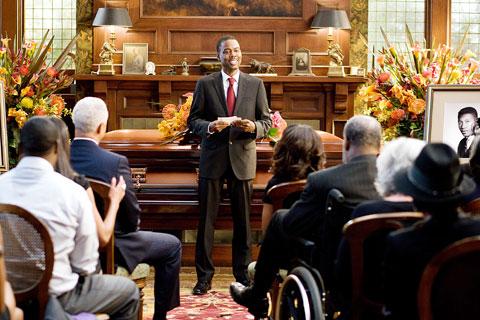 NEW YORK (CNS) — "Death at a Funeral" (Screen Gems), director Neil LaBute’s Americanization of Frank Oz’s 2007 British comedy of the same title, mostly seeks its laughs in the bedroom and bathroom. The results are predictably woeful, with LaBute and screenwriter Dean Craig — who also wrote the original film — largely wasting the gifts of a potentially winning cast.

This ensemble farce relates the various outlandish mishaps that befall estranged brothers Aaron (Chris Rock) and Ryan (Martin Lawrence) and a number their relatives and friends (notably James Marsden, Tracy Morgan and Danny Glover) as they all gather to bury the family patriarch.

Among the supposedly humorous developments delaying the obsequies are the insistent pleas of Aaron’s wife, Michelle (Regina Hall), that the couple slip upstairs and take advantage of her fertility cycle to conceive their first child, and an incident in which Morgan’s character helps Glover, playing wheelchair-bound and cantankerous Uncle Russell, to use the toilet, only to find himself the victim of a repulsive — and vividly portrayed — accident.

Another story line hinges on the played-for-laughs revelation of the deceased’s concealed relationship with a mysterious stranger named Frank (Peter Dinklage), who now threatens to show incriminating photos to the widow (Loretta Devine) unless he’s paid $30,000 in hush money.

Though Marsden initially has some daffy fun with the role of a future in-law who mistakenly takes a hallucinogenic, thinking it’s Valium, by the time he ends up climbing around on the roof of the family home stark naked, it’s pretty clear that "Death at a Funeral" is DOA.