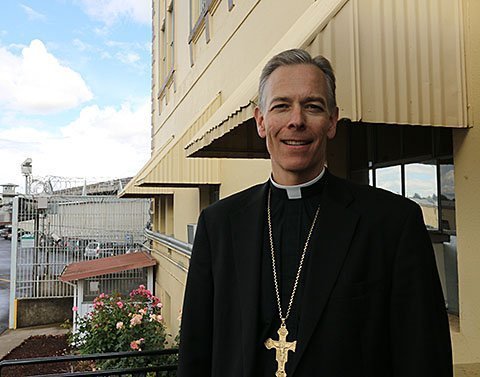 Archbishop Alexander K. Sample of Portland, Ore., stands outside Oregon State Penitentiary in Salem. On May 28, in a heavily-guarded private ceremony, the archbishop confirmed four death-row inmates. He told the men that Christ died on the cross "because he loves you.

SALEM, Ore. (CNS) — Portland Archbishop Alexander K. Sample confirmed one of Oregon’s most infamous prisoners May 28 in a heavily guarded private ceremony in the maximum security prison in Salem.

In 2007 Gary Haugen was convicted and sentenced to death for murdering a fellow inmate while serving a life sentence for the murder of his former girlfriend’s mother. In November 2011 Haugen gained notoriety for dropping his appeals and asking to be executed.

A second death-row prisoner, Jason Van Brumwell, who was an accomplice with Haugen in the prison killing, wants to die, too, arguing that pursuing appeals is pointless.

Haugen was scheduled to be put to death for his second murder in December 2011, but his execution was put on hold by Oregon Gov. John Kitzhaber, despite Haugen’s pleas to end his life.

The Democratic governor has halted all executions for the duration of his time in office.

Oregon State Penitentiary — or OSP, as the high-walled, Belgian razor wire-topped prison fortress on the outskirts of the state capital is known — houses 2,100 inmates, nearly half of whom are behind bars for sex offender convictions.

Thirty-five men are confined to special housing, single-occupancy cells on death row. The last execution at the penitentiary occurred May 16, 1997.

On the afternoon of May 28, a shackled Haugen entered the small room followed by three other Catholic death-row inmates plus guards. Haugen, who said his heart was pounding, went to the floor and lay face down before Archbishop Sample, saying, "I am not worthy to be here."

The prisoners — Haugen, Ricardo Serrano, Conan Hale and Jeff Tiner — were then closed in individual cages that included only a small opening. There were no chairs or pews, so Haugen stood through the entire Mass with a peaceful, gentle expression on his face.

Though only a few feet from the archbishop, a sturdy crosshatch of iron kept them apart. Death-row inmates are forbidden to touch anyone, so it was unusual when the archbishop reached in to anoint the inmate’s head gently.

Haugen was baptized earlier this year. Tiner, who has written letters to the editor to support Catholic causes, is Haugen’s sponsor.

During his homily, Archbishop Sample told Haugen and the other men that Jesus experienced being a criminal. He reminded the men they are not alone.

"God died on that cross because he loves you," the archbishop said.

Archbishop Sample explained the holy oil used for confirmation. It is infused with sweet-smelling balsam. He told Haugen that now he is to be "the fragrance of Christ in this place."

The inmates received Communion kneeling as the archbishop reached through the small opening.

"I have seen confirmations all spring and there was nothing like this one," said Deacon Tom Gornick, who directs prison ministry in the Portland Archdiocese.

Confirmation is one of the seven sacraments Christ instituted. Catholic teaching says confirmation — which along with baptism and first Communion is a sacrament of initiation — seals the faithful with the gifts of the Holy Spirit, strengthening them in their Christian life.

The Catholic woman who heads the state’s Department of Corrections was pleased with the confirmation.

Collette Peters said she hoped that the media-savvy Haugen just "may be on the cusp of saving his soul."

Peters, a member of a suburban Portland parish, has transformed life in prison for Oregon inmates through her reforms, introducing many innovative programs to guide prisoners for eventual re-entry into civilian life.

For his part, the archbishop is partnering with Peters so he can have better access to his parishioners who live behind bars and cannot get to Mass on weekends.

His next series of prison ministry visits will be to women’s prisons.

Archbishop Sample was transformed himself as he passed through tight security screening and was escorted to the chapel by correctional officers, no longer called guards.

The 6-foot-2 churchman, a youthful-looking 53-year-old, has been actively involved in prison ministry since his days as a young priest in the Diocese of Marquette, Michigan, along Lake Superior in the Michigan’s Upper Peninsula.

Pfohman is editor of the Catholic Sentinel, newspaper of the Portland Archdiocese.