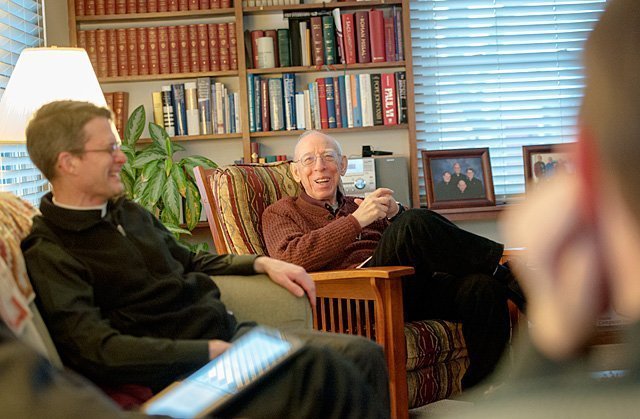 The Congregation of St. Basil, which has served Catholic parishioners in the Town of Irondequoit for more than four decades, is withdrawing its priests from St. Kateri Tekakwitha Parish effective July 1, 2019.

In a letter to the parish dated Nov. 27, Rochester Bishop Salvatore R. Matano announced his receipt of an Oct. 26 letter from Father Kevin J. Storey, CSB, superior general of the Basilians, indicating that the order is leaving the parish due to declining priest availability.

In the Basilians’ December 2018 newsletter, Father Storey noted that by the year 2022 the order is projected to have only 20 ordained Basilians under age 65 in the United States and Canada.

Father English told the Catholic Courier that he will relocate to Houston, Texas, at the end of June to become the Basilians’ master of novices and scholastics, ministering to men in formation for the Congregation of St. Basil. Father Trovato’s future living arrangements have not yet been determined, he said.

Father English noted that his order’s decision does not affect the two non-Basilian priests currently serving St. Kateri Tekakwitha. Father Walter Cushing, a senior priest of the Diocese of Rochester, is priest-in-residence at the parish. Father Evan Simington, a priest of the Personal Ordinariate of the Chair of St. Peter, is parochial vicar of St. Kateri Tekakwitha and parochial administrator of the Fellowship of St. Alban, a group mostly made up of former Anglicans who are now Catholic.

Father English — who has served as his order’s local superior — and Father Trovato are among five Basilian priests currently residing in the Diocese of Rochester. Father Kevin Mannara is the director of campus ministry at St. John Fisher College, and Fathers Thomas Dugan and Albert Cylwicki are senior priests residing at the Sisters of St. Joseph Motherhouse.

In his Nov. 27 letter, Bishop Matano said the Basilians will continue to direct the campus-ministry program at St. John Fisher. The bishop said he is already working with the diocese’s Priests’ Personnel Board on pastoral assignments for St. Kateri and other diocesan parishes. These appointments will be announced this coming spring.

Whereas parish staffing by religious orders is subject to a local bishop’s approval, Father English emphasized that the decision for Basilians to withdraw from St. Kateri Tekakwitha was made by the Basilian order and not by Bishop Matano.

“I am grateful for the contributions that they have made in our diocese and I so regret their departure from the parish,” Bishop Matano said of the Basilians in his Nov. 27 letter, noting the order’s longtime ties to St. Kateri Tekakwitha, St. John Fisher and Aquinas Institute.

The Congregation of St. Basil began in France in 1822 and, three decades later, became established in Toronto, which is the home base for priests ministering in the Rochester Diocese.

Basilians first served locally as teachers at Aquinas from 1927-32, taking over leadership of the high school in 1937.

The order founded St. John Fisher College in 1948, and in 1976 assumed priestly staffing at Irondequoit’s Church of Christ the King.

The order’s role in Irondequoit expanded in 2010 with the formation of St. Kateri Tekakwitha Parish, which comprises Christ the King, St. Cecilia and St. Margaret Mary churches as well as the Latin Mass community at St. Thomas the Apostle Church.

Because of declining membership in the order, the last Basilian priest had left Aquinas by 2000, and the order had stopped assigning priests as faculty at St. John Fisher.

Now the impact of decreasing priest availability is being felt at the parish level.

“There have been expressions of sadness, and of appreciation for the 42 years the Basilians have spent serving in Irondequoit,” Father English told the Courier, adding that “there have also been expressions of prayer and support for the bishop as he decides who takes over as pastor.”