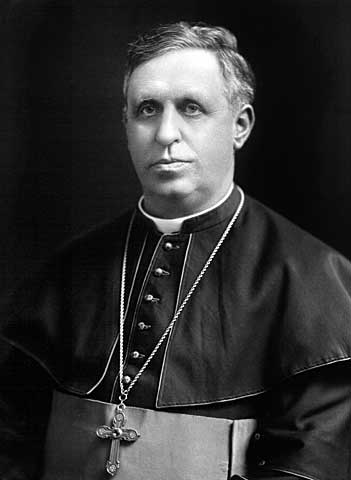 The work of Bishop Thomas Francis Hickey set the foundation that enabled Catholic Charities to serve hundreds of thousands of people in the Diocese of Rochester during the last 100 years.

Bishop Hickey was born in Rochester Feb. 4, 1861, and graduated with honors from St. Andrew’s diocesan preparatory seminary in 1879. Despite facing financial hardships, he completed seminary training at St. Joseph’s Seminary in Troy, N.Y., and was ordained in 1884. Only four years later he was assigned to his first pastorate at St. Patrick Church in Moravia, where he earned a reputation as a compelling preacher due to his well-composed and well-delivered homilies.

In 1898 he was appointed rector of St. Patrick Cathedral in Rochester, where his principal contribution was the founding of Cathedral High School. He later succeeded Father James P. Kiernan as diocesan vicar general and in 1905 was appointed auxiliary bishop of the diocese. He became the second bishop of Rochester after the death of Bishop Bernard J. McQuaid in 1909.

Bishop Hickey made great strides for the diocese, but probably his greatest impact was in helping to build the foundation for what is now known as Catholic Charities. He established the first diocesan-administered charitable organization, the Catholic Charities Guild, in 1912.

Previously, any charitable endeavors had been conducted on an individual level by parishes or religious orders. This centralized Catholic Charities operation allowed for citywide cooperation with other charities and social agencies in Rochester. Forms of assistance initially offered were catechetical, social inquiry, juvenile reform and physical relief. Planning for the first Catholic Charities collection began in 1910. The collection was launched in January 1911 and raised $6,800. This money helped to finance care for orphans, the elderly, and the dependent and delinquent of the diocese, as well as catechetical programs and missionary work.

In 1918 Bishop Hickey recommended to the Catholic Charities board that it accept an invitation from George Eastman to join the Patriotic and Community Fund, now known as the United Way. This decision had enormous influence on the evolution of human-services work in Monroe County.