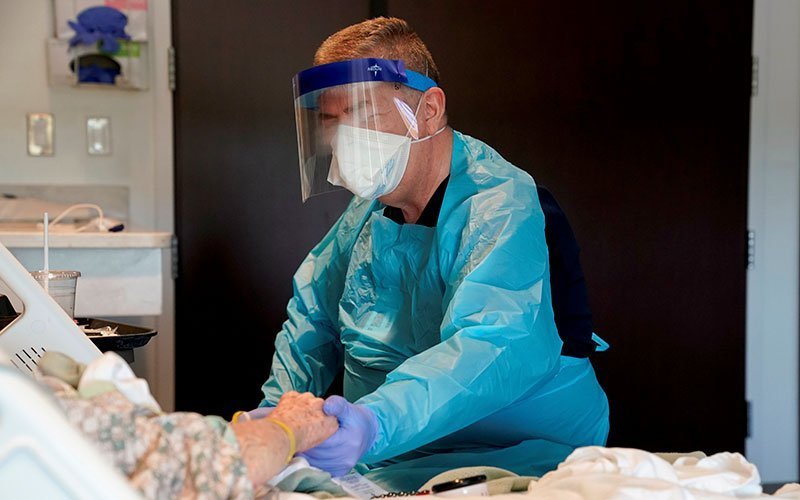 Loss and healing in the age of COVID-19

Three weeks after her husband died, I called the widow to see how she was doing. Sadly, the man had died shortly after the state had put a shelter-in-place restriction on most gatherings because of the COVID-19 pandemic. The woman was eager to talk and filled me in on how the kids, all young adults, were doing since their father’s death.

As the phone conversation continued, we talked about the very brief gathering the immediate family had had at the funeral home three days after the death.

At that time, I had made a virtual appearance with a Scripture reading, a shared reflection and a prayer. Everything else, including a memorial Mass, will take place once it is considered safe to have larger gatherings.

Before we concluded, the widow told me that although she wasn’t sure what other women experienced when their husbands died, she felt very unsettled and hoped the funeral would help her grieving. In many ways, her grief work was being delayed.

Very likely, this woman was correct in what she said about the need to have the funeral Mass. Although they do not take away grief, funerals often transform grief with a process that provides hope. This seems to be especially true with Catholic funeral Masses.

After decades of pastoring and hundreds of funerals, I have discovered that the Catholic funeral Mass, with or without the body present, can provide a roadmap for families in their grief process.

The very essence of the Mass with the emphasis on the paschal mystery of death and resurrection guides people out of numbness into more firm belief.

This year, however, the coronavirus pandemic has caused many funerals to be postponed, eliminated or reduced to a quick burial service. Consequently, the always-hard grief process has been put on hold and become a more treacherous road to navigate.

Nonetheless, grieving is necessary and can still take place.

There seems to be an innate need for ritual, and the steps that families take after a death are often full of ritual. The way children write a parent’s obituary, the choices spouses are required to make regarding funeral plans and the review of both the Scriptures and the music for a funeral Mass — all these allow families to participate in honoring the deceased.

If a funeral is postponed, however, that does not necessarily mean these steps have to be shelved. In fact, it can be helpful for families to take the time and seriously read the optional Scripture passages.

Working together or alone, family members can also construct their own tribute to the recently deceased, something that can be shared online or with close by family. Stories from each person’s perspective need to be told, and memories can be shared.

Family members can even write a prayer of commendation of their loved one into the hands of God.

Part of the challenge of any delayed funeral option is that people feel they are being overlooked or neglected. Yet that is not what happens with emotions. Not tending to them means they become confused or exaggerated. Sometimes issues that could be easily dealt with become insurmountable.

In a recent conversation with someone whose friend had died, she said she so wanted to offer a hug to each of the family members of her friend. Instead, she had to settle for the use of phone calls, notes and online messages.

And it is not merely family friends that seem to be missing out; most families of deceased are also reassured by visits, kind words and physical proximity after a death.

Perhaps the hardest part is more than not being able to move ahead with a funeral or even to have the direct physical contact that is always reassuring. The most challenging may be the fact that this personal loss is taking place in the midst of a larger universal loss.

People are suffering in many ways. There are outbreaks of the virus. Others are hurting financially. And almost everyone has a certain amount of fear creeping into their lives.

When the entire world is in a state of anguish, a family’s personal loss gets swallowed up. One almost feels that his or her personal loss pales in contrast to the bigger picture.

It’s like the woman who told me years ago that she had great trouble grieving the death of her father. When I asked why, she said it was because he died on Nov. 22, 1963, the same day that President John F. Kennedy was shot. In the wake of national crisis, she had trouble dealing with her personal loss.

When there is so much pain, a person’s personal tragedy can go unnoticed. When others do not recognize that individual loss, the hurting person has to deal with it alone.

Death is a reality for everyone. The dying process is always challenging. It can be so overwhelming when faced alone. Dealing with such loss in a time of pandemic can be especially challenging.

For that reason, churches and church ministers have to be especially dedicated to reaching out to families of the deceased at this time.