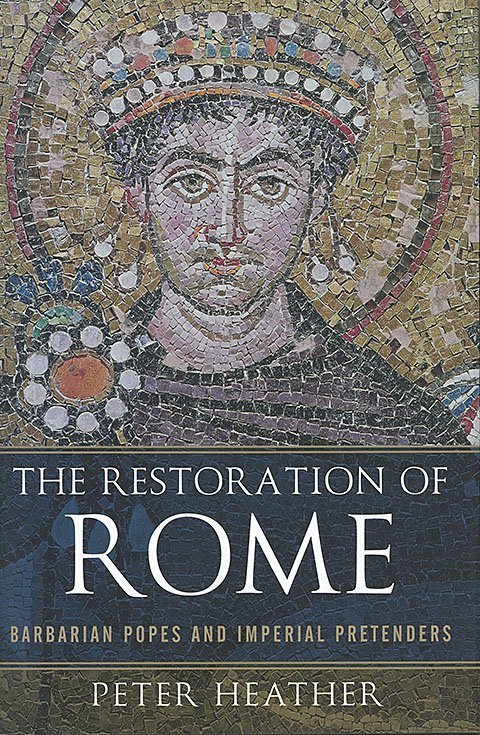 "The Restoration of Rome: Barbarian Popes and Imperial Pretenders" by Peter Heather

The long and winding "The Restoration of Rome" brings readers to the point — if they ever finish it — where they see how the bishop of Rome was the one to restore Rome’s empire rather than the political rulers Theodoric, Justinian and Charlemagne, despite the great efforts of these three.

Peter Heather, a professor of medieval history at King’s College London, leads us on a long march through history’s winners and losers. Rome and its Greek leftover state, the Byzantine Empire, and the various successor tribes and kingdoms of the West all vied for the spoils of Rome’s rotting carcass. Surprisingly, tax revenues and local wealth, mostly in Italy and southern Gaul, remained more or less intact, as they were the prizes everyone was after.

But we learn little cultural and economic history, as Heather keeps us firmly fixed on political and military adventuring.

Thanks to the instability, readers can get lost in the various peoples involved, only a few of whom are still around: Bulgars, Sclaveni, Antae, Vandals-Alans, Thracian Goths, Pannonian Goths, Visigoths, Burgundians, Gepids, Rugi, Franks, Alamanni and scores more ran around the fringes of Europe, often stampeding near the heart of the empire as well.

"The Restoration of Rome" also offers a fascinating account of the development and growth of Islam. The Byzantine and Persian empires — mortal enemies — paid Arabian warriors to fight their wars in the deserts of northern Arabia. This led to the organization of splintered Arab groups into two main fighting forces, one under each of the empires.

As Heather explains at other places in the book, the empires helped to develop outlying districts — the Arabian Peninsula in this case — which then strengthened and became the equals of the empire in question. So the newly organized Arabs, under the Prophet Muhammad, founded their own empire, which took in the most important parts of the by-now-exhausted Persian and Byzantine empires.

This brings up another point often discussed by Heather. Whether it was one of the three warrior kings mentioned above, or the bishop of Rome, none had an initial plan to build an empire. They reigned mostly from a reactive posture. They engaged in battle against enemies they feared were threatening them.

Thus when Charlemagne fought the non-Christian Saxons for most of his reign, it was often a yearly reaction to a recent Saxon massacre of Christian-Frankish communities, the murder of Christian monk-missionaries, or the repudiation of their baptism. Taken as a whole, it never seems that from the outset Charlemagne had the plan of taking over and Christianizing the entire Saxon people.

Policy was reactive and made in bits and pieces. Only after Justinian had success in North Africa did he decide to take Sicily and southern Italy from the Germanic tribes. He had no plans for re-conquest at the beginning of his rule.

Heather’s quite convincing argument is that these imperial successor states to Rome were largely unplanned and accidental, and that once a warlord had gotten a few victories under his belt, local warriors would join in so that they could get their hands on some of the booty as well. This would swell the ranks of the military and create its own momentum, whereas those attacked would be at a psychological disadvantage and would more easily give up.

Even without an overarching plan, one reason such men succeeded was the clear ideology they developed. Heather argues that they were as ideological as we are in our time, with religion mixed with "Romanitas" — the Roman way of doing things — as the chief philosophy. Catholic readers might not be amused that the author reduces religion to political theory, but this view of Christianity as just one worldview among many is common currency nowadays among academics.

"Romanitas" retained a powerful hold over these rulers. Heather describes its role in Theodoric’s reign: (I)t was in tune with God’s plans for humankind. Panegyrics, official letters, coinage …, visual representations and buildings were all used to sustain this claim and its supporting pillars: reverence for Roman law and classical education."

Heather asks the obvious question: "Why did a Gothic warlord from the Amal dynasty go to so much trouble to present himself as thoroughly Roman?" This was so that Theodoric’s subjects could understand his rule and identify with it, the author notes.

In other words, these rulers and popes, mostly Germanic or influenced by German warrior culture, saw themselves as continuing Rome. They did not see themselves as revolutionary. Despite all the upheavals, it was a conservative movement trying to fit into a conservative Roman society.

As hinted above, while this is all clear enough, readers will have to be patient with all the names of leaders and peoples, as well as with the labyrinthine politics. As this is an ambitious work that probably could have come out as two or three books, it is demanding on the reader.