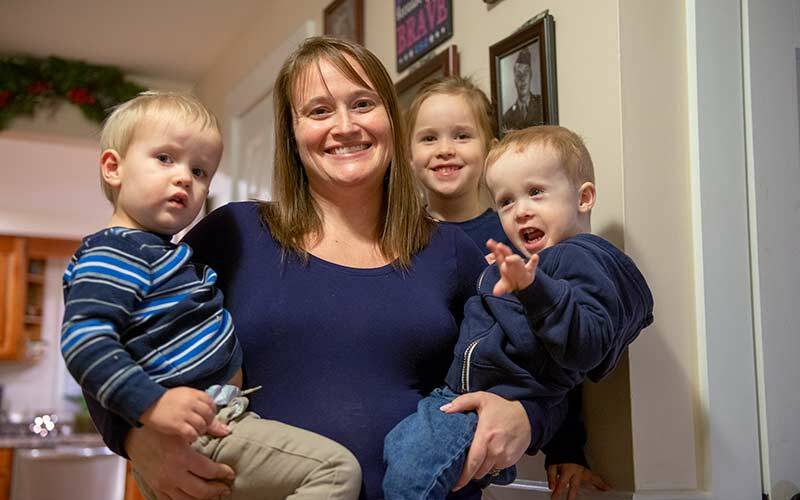 Samantha Stewart poses with her children at their home in Canandaigua. (Courier photo by Jeff Witherow)

What started out as a typical winter day soon turned into a day the Stewart family will remember forever.

Five-year-old Kailynn Stewart was in gym class at St. Mary School in Canandaigua on Dec. 15 when she turned around and saw her father, Sgt. 1st Class Kyle Stewart, standing near the door to the gymnasium.

“Daddy! Daddy!” she cried as she ran across the gym and threw herself into his waiting arms.

“I did not know you were coming home today!” Kailynn exclaimed as she wrapped her arms around her father’s neck.

Kailynn had not seen her father in person since the previous April, when he was deployed to South Korea. Kyle Stewart has been in the U.S. Army Reserves for 22 years, but this is his longest deployment, Samantha Stewart said. He currently serves as the COVID information manager at Camp Humphrey in Pyeongtaek, South Korea, she added.

“When he left in April, he was supposed to return in September. In September, they said, ‘You’re doing a really good job. We really need you to stay.’ They extended him to November,” she recalled.

His stint in South Korea has been extended to this coming March, but that is subject to change depending on the military’s needs at any given time, Samantha Stewart said. The same is true for leave time, which is why the Stewart family’s holiday plans were up in the air until mid-December. Kyle Stewart was hoping to come home for Christmas, but plans are never set in stone for military families, his wife said.

“With the military, it all depends on military needs and other people taking leave,” she explained. “He’s the only one in South Korea that does his job, so it was not easy for him to get the leave.”

That’s why Samantha Stewart did not tell her children their father might be home for Christmas, even when Kailynn said her Christmas wish was for her father to come home.

“That was something we had not discussed with the kids, because in case it doesn’t happen, you don’t want to get their hopes up,” Samantha Stewart said.

Until Dec. 15, all of Kyle Stewart’s interactions with his family had taken place during video chats. Shortly after he was deployed, the family established a system of morning and nightly video chats and stuck with that schedule despite the 14-hour time difference between Canandaigua and Pyeongtaek, Samantha Stewart said.

“They do really well,” she said. “The kids love talking to Dad, and any time my 1-year-old sees my phone, he says, ‘Dad!’ He turned 1 on April 7, right after Kyle left. When he hears his dad on the phone, he will yell, ‘Dad!’ He knows his voice.”

And on Dec. 15, little Kamden and his siblings got to hug the man that voice belongs to for the first time in nearly a year. Kyle Stewart, in turn, not only got to watch his sons walk — something they hadn’t been doing when left — but he also got to meet the family’s 17-year-old exchange student from the Dominican Republic. Before he headed to St. Mary School to surprise Kailynn, he also got his first real look at the house he and Samantha Stewart bought while he was overseas.

Believe it or not, however, Kyle Stewart’s visit to Kailynn’s gym class was not the only surprise he pulled off that day. Earlier in the day, he’d enlisted a friend’s help in order to surprise his wife.

“I was sitting in my living room, and Kyle’s friend pulls in our driveway honking his horn. In my head I’m thinking, ‘Did I ask Aaron to come do something for me? Why is he here?’” Samantha Stewart recalled. “I go outside and he says, ‘Oh hey, I was just in the neighborhood and thought I would stop by.’ I start to answer him and look to my right, and there was Kyle. I was completely shocked.”

She’d known her husband was planning to come home for Christmas, Samantha Stewart said, but he’d arrived days before she’d expected him. She couldn’t believe he’d been able to make the 18-hour trip home from South Korea without saying anything to tip her off about his impending arrival.

“I thought for sure I would know if he was going to surprise me, like he would talk to me differently or not talk to me, but he kept things normal. I can’t believe he pulled it off,” she said.

And the next day, Kyle Stewart pulled off another pair of surprises when the family traveled to his hometown of Hornell and reunited with his mom at his uncle’s house and his dad at a local golf course.

His two-week leave went by in the blink of an eye.

“It was truly amazing and it went by so beyond fast, but you know, I really felt like we didn’t waste any moments,” Samantha Stewart said.