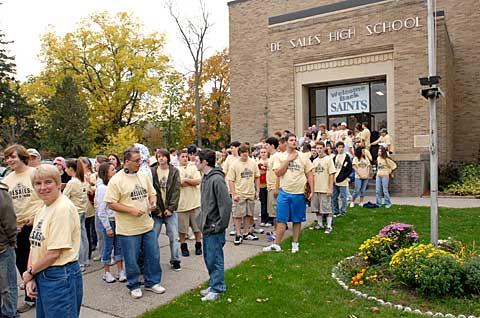 Geneva’s DeSales High School is sending out an SOS. The school must raise several hundred thousand dollars in the next few months in order to reopen for the 2010-11 school year.

School leadership announced at an April board meeting that the school was facing a $450,000 deficit for the 2010-11 school year, and launched the Save Our School campaign in May. Since then the school has raised approximately $120,000, according to Gerald Macaluso, principal.

Macaluso and the school’s trustees notified parents, alumni and benefactors of the deficit and its consequences for the school’s future in a May 31 letter.

"The $450,000 deficit jeopardizes the opening of our doors in September 2010," Macaluso and the trustees stated in their letter. "The administration and the staff anticipate ‘opening those doors’ and continuing the proud DeSales tradition into the future, but without financial assistance this will not happen."

Macaluso told the Catholic Courier that the school had been running deficits for the past few years, but that the situation worsened during the 2009-10 academic year.

"I think in all honesty that even though the school reduced its budget considerably from the 2008-09 academic year … the revenue stream that was expected to have materialized did not," said Macaluso. Principal since August 2009, Macaluso did not explain why the anticipated revenue did not materialize.

Macaluso said DeSales’ Board of Trustees will decide in mid- to late July whether the school will open in the fall. He said the school is taking a multifaceted approach to reducing the school’s deficit and ensuring its future. The first part of that approach is to secure continued grant funding from the McGowan Charitable Foundation for DeSales’ 21st Century Learning Partnership, which allows students to gain work experience and the job skills employers currently seek.

DeSales also began soliciting contributions for the Save Our School campaign in May, and is offering various levels of sponsorship. Donors will be formally recognized at the appropriate levels, and may send donations to the school, 90 Pulteney St., Geneva, 14456. Benefactors also may contribute to the campaign online at the school’s website, www.desaleshs.org, by clicking on the "Click and Pledge" button along the right-hand side of the page. This link leads to a secure page where donors can contribute to the campaign via credit card.

DeSales also is presenting several fundraising activities, including a phone-a-thon that took place June 23-24 and several family-fun bowling nights. In addition, the school is raffling off two tickets to Notre Dame University’s Sept. 25 home football game against Stanford University and overnight accommodations for two. Tickets for the raffle are being sold for $5 apiece, and the winner will be announced July 23.

DeSales’ leadership also is seeking foundational and corporate funds, and looking for corporations and foundations that identify with DeSales’ mission, Macaluso said.

So far the school has been able to whittle down the deficit to $330,000, and if the school receives the McGowan grant the deficit will be reduced to $247,000, he said.

Macaluso said he’s grateful for the community’s outpouring of strong support for the school.

"It really is amazing the connections the school has with the community," he said.

All of the fundraising initiatives must be successful in order for the school to reopen the school in September, he added.

"We can’t be in the same place again. It just can’t happen," Macaluso said. "What we don’t want to do is miscalculate the revenue and then find out that we do not have enough and we would then have to close the school during the academic year."

Macaluso said families are continuing to enroll their students in DeSales for the 2010-11 school year, but that some do appear to be waiting to find out whether the school will remain open before making enrollment decisions.

"That’s why we have to make the decision relatively soon," he said.