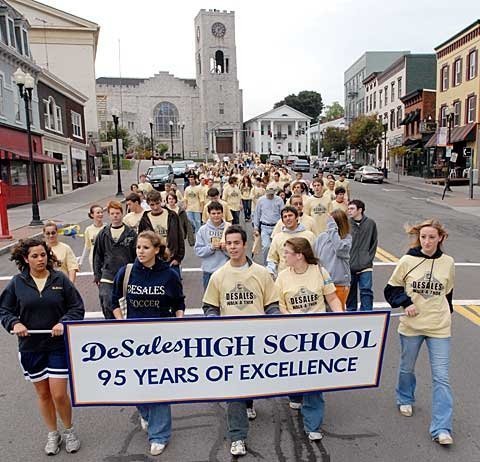 Geneva's DeSales High School (whose students, shown above, take part in a 2007 walk-a-thon) needs to raise $200,000 by the end of June to remain open next school year.

DeSales High School in Geneva must raise almost $200,000 by June 30 in order to remain open for the 2012-13 school year, according to Peter Cheney, president of the school’s Board of Trustees.

"We must be fully funded by June 30. The last thing we will do is close halfway through the academic year. If we are not funded by June 30, 2012, DeSales High School will close," the trustees wrote in a May 29 statement.

DeSales’ trustees and finance committee are projecting a budget shortfall of just under $200,000. This is the third consecutive year the school has launched a fundraising campaign to close such a gap and secure enough funds to remain open for the next school year. The finance committee originally had projected a budget shortfall of approximately $400,000, which is about the same amount as the deficits in recent years, but school officials worked hard to reduce the current year’s deficit, Cheney said.

"This year we worked very hard to trim off any excess that we had without losing quality for the students," he said. Nonetheless, he added, "We have to stop this. This cannot go on year after year after year."

DeSales faces a deficit each year because the amount of money it takes in through tuition and fundraising efforts is not enough to cover the school’s operating expenses, one of the largest of which is staff members’ salaries and benefits, he said. If DeSales can boost its enrollment and thus the amount of money flowing in through tuition it won’t face such a large shortfall each year, he added.

Generous donors from the community stepped forward in 2011 and 2010 with contributions that allowed the school to remain open for the 2010-11 and 2011-12 school years.

Cheney said the trustees believe they have devised a plan for the school to remain solvent, provided the immediate shortfall is made up by June 30. They believe that gap can be closed if DeSales alumni — dubbed Saints after the school’s sports teams — and supporters make financial contributions to the school.

"We need 375 Saints and friends of Saints to donate $500 (apiece) to DeSales. It will allow us to open our doors and continue to offer a positive faith-based environment for approximately 120 students throughout the Finger Lakes," the trustees stated.

If DeSales opens its doors in September, a number of changes will be implemented, Cheney said. The school’s athletic director, Ronald Passalacqua, is retiring at the end of the current school year, and Cheney said the school will hire a replacement who will serve as both athletic director and dean of students. This dean will take on some of the principal’s student-related responsibilities so the principal can better focus on running the school efficiently, he said.

DeSales also will have a new principal next year, as current Principal Gerald Macaluso is retiring at the end of June after three years at DeSales’ helm. While the timing of his retirement is somewhat unfortunate, Macaluso said he has faith in the school community and it’s ability to persevere.

"I’m confident that as in previous years, the community of DeSales will band together and continue with the DeSales legacy for another 100 years," Macaluso said.