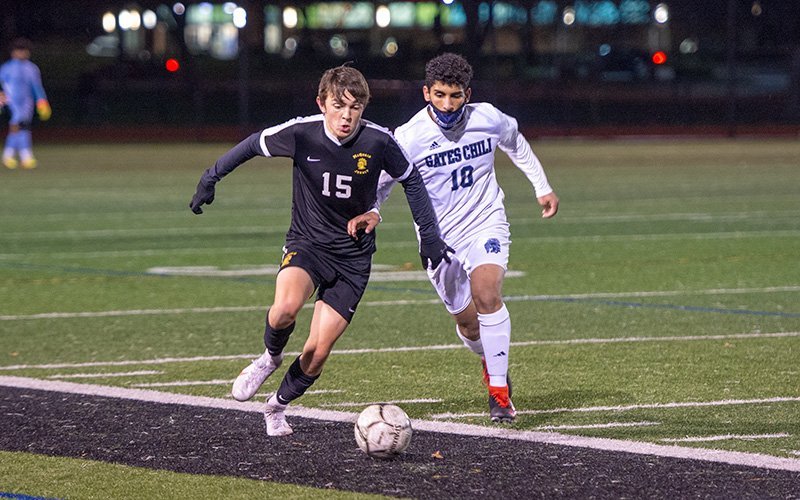 Even with altered schedules, Catholic high schools in the diocese produced several athletic successes this autumn.

Leading the way were Section 5 titles in golf and tennis earned by the Our Lady of Mercy girls, and sectional runner-up showings by Bishop Kearney boys’ soccer and Mercy girls’ soccer. Several other fall sports in Section 5, such as football, volleyball and cheerleading, have been postponed into 2021 due to the risk of COVID-19 spread. And in Section 4, where Elmira Notre Dame is located, the entire fall sports schedule has been similarly suspended. In addition, state-tournament competition in all fall sports has been cancelled.

Among the fall season’s highlights:

‚Ä¢ Mercy golf won the Section 5 team title Oct. 19, combining for 351 strokes to squeak by second-place Victor’s 352 total. The Monarchs also excelled in individual sectional competition, which combined their team-tournament scores with a second round held Oct. 21. Michaela Eichas took fourth place with rounds of 86 and 83 for a 169 total; Mercy teammate Georgina Spatorico placed seventh at 83-89 — 172; and Sophia Cellura was ninth at 91-85 — 176. By finishing in the top nine, all three Monarchs advanced to the state tournament to be held next June. In addition, Mercy’s Lauren Ogden earned the first alternate position for states.

‚Ä¢ Mercy tennis produced sectional champions as well, with the Monarchs’ Alanna Jordan and Tessa Hartzell capturing the Section 5 Class A2 doubles crown. The third-seeded duo knocked off the top seeds, Kylie Mariano and Sara Kotz of Brighton, by a 10-8 score Nov. 18 to earn the title. In earlier rounds, Jordan and Hartzell won 10-0 over sixth-seeded Grace Buckley and Cara Saunders of Irondequoit in quarterfinal play; and 10-6 over Pittsford Mendon’s Erin Stanton and Eleanor Stanton, the No. 2 seeds, in the semifinal round.

‚Ä¢ Kearney boys’ soccer finished as runner-up in Section 5 Class B2. The sixth-seeded Kings started out with a 5-2 win over No. 3 North Rose-Wolcott in quarterfinal play Nov. 14, and went on to a 2-0 semifinal triumph over No. 2 Penn Yan Nov. 17. Kearney was stopped by top-seeded Bath-Haverling, 3-0, in the title game held Nov. 19.

‚Ä¢ Mercy soccer made a nice run to the Section 5 Class A final from its No 7-seed position. The Monarchs won 2-1 over No. 10 Aquinas Institute in first-round play Nov. 11, then pulled off a 3-2 upset over No. 2 Pittsford Mendon in quarterfinal action Nov. 14 before scoring yet another one-goal victory, 2-1 over No. 6 Churchville-Chili, in semifinal play Nov. 17. Mercy’s season ended with a 3-0 loss to No. 1-seeded Spencerport in the title contest Nov. 19.

‚Ä¢ Additional athletic achievements came from McQuaid cross-country, which placed third in the Section 5 Class A championships Nov. 21 behind a second-place individual finish from the Knights’ Jayson Chichelli and a fifth place from teammate Collin Brown; and Mercy cross-country, which took fifth in the Section 5 Class A meet Nov. 21 as the Monarchs’ Emma Spagnola placed fifth individually.