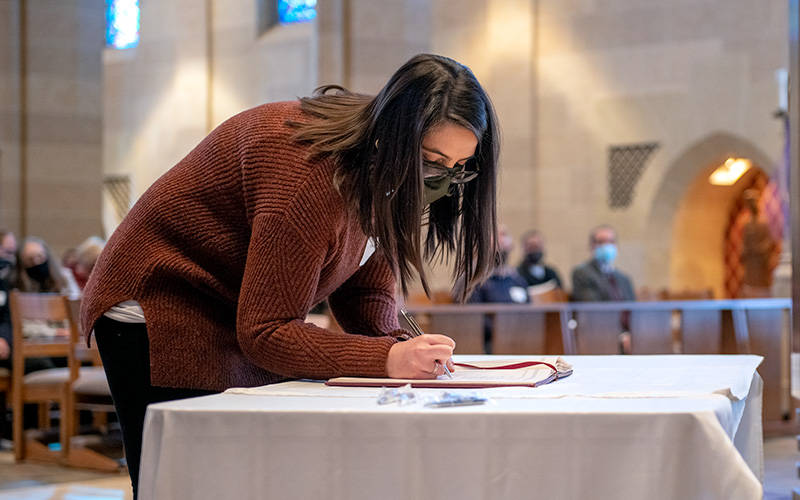 Catechumen Christina Ashbery from Holy Cross and Our Mother of Sorrows churches in Charlotte and Greece signs the Book of the Elect during the Feb. 21 Rite of Election and Call to Continuing Conversion ceremony at Sacred Heart Cathedral. (Courier photo by Jeff Witherow)

This year, Christina Ashbery is especially looking forward to Easter, on which she will become a member of the Catholic Church.

Ashbery was one of 24 catechumens — those who are preparing for the sacraments of baptism, first Eucharist and confirmation — who participated in the Diocese of Rochester’s Rite of Election and Call to Continuing Conversion along with 26 candidates — those who previously have been baptized in recognized Christian rites and will receive the sacraments of first Eucharist and confirmation at the Easter Vigil. The Rite of Election, which took place at Sacred Heart Cathedral Feb. 21, is one of the steps in the Rite of Christian Initiation of Adults program.

Bishop Matano presided at the Rite of Election, which was livestreamed by the Catholic Courier for those unable to attend because COVID-19 restrictions limited the candidates and catechumens to having only their godparents or sponsors in attendance.

The effect of the pandemic also could be seen in a reduction to one ceremony this year, as opposed to previous years in which the diocese has offered one at the cathedral and a second at a church in the Southern Tier, noted Don Smith, diocesan coordinator of sacramental catechesis and family life.

This reduction was due to a significant drop in the number of people joining the church this Easter. Of the parishes that reported numbers to the diocese, Smith said 32 catechumens and 40 candidates are participating in RCIA this year.

Smith said one reason for reduced RCIA participation this year is that parishes weren’t publicizing their programs as much because of the difficulties of scheduling in-person meetings and hence recruited fewer participants.

He said he heard from a number of parishes that RCIA groups were unable to meet as regularly due to COVID-19 restrictions, so some participants did not feel ready to receive the sacraments this year.

“That’s one of the beauties of the RCIA program, as it is designed not to be a September-to-Easter program but is supposed to be as people are ready to move forward in the process,” Smith said, speculating that the diocese could see an above-average number of people entering the church in 2022.

Also, due to COVID, he said a number of parishes asked for “delegation” — permission from Bishop Matano — to conduct Rite of Election and Call to Continuing Conversion ceremonies at their own parishes to accommodate participants who are avoiding large public events because they are are health-care workers or have pre-existing health conditions.

For example, Smith said Cornell University’s Catholic Community, whose RCIA program has six catechumens and seven candidates seeking initiation this year, asked to have its own Rite of Election ceremony because Cornell students have signed agreements with the university to avoid leaving campus unless absolutely necessary.

Cornell Catholic Community likewise conducted its Rite of Election ceremony Feb. 28 at Immaculate Conception Parish in Ithaca, which has been the community’s temporary location while unable to have Masses on campus, according to Matthew Hall, coordinator for the RCIA program at Cornell University and Ithaca College.

While enrollment in parish RCIA programs may be lower than in previous years, Smith noted that this year’s program included more young adults — people in their 20s and 30s — who are entering the church.

Ashbery, one of those young adults, is one of eight people making the faith journey with Holy Cross and Our Mother of Sorrows parishes in Charlotte and Greece, which clustered in the summer of last year. She will be baptized at Holy Cross Church during the Easter Vigil, alongside her infant daughter, Olivia. Ashbery entered the RCIA program after seeing how her twin sister’s Catholic faith helped her through the loss of their mother last March.

“I just saw my sister deal with the death of my mother differently than I did,” Ashbery explained, noting that her sister had entered the Catholic Church eight years ago. “I just had a lot of questions, and I just wanted to learn more about Catholicism and what that meant for me.”

Holy Cross and Our Mother of Sorrows initially conducted in-person sessions for this year’s RCIA program but later shifted to an online format. The timing of that switch benefited Ashbery, who had given birth to her daughter in the fall.

“I feel like everyone gets more out of it (online), and there is not the stress of having to go somewhere,” Ashbury said of the RCIA program. “It has been more personalized. You see people’s dogs, or kids, or husbands and wives coming in and out (of the camera view). It’s been good.”