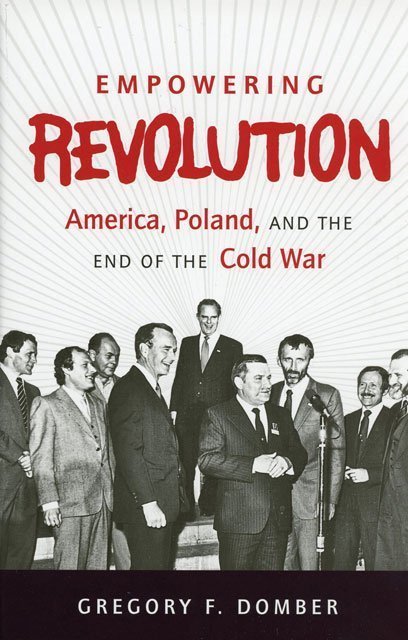 This is the cover of "Empowering Revolution: America, Poland, and the End of the Cold War" by Gregory F. Domber.

While the Reagan administration had a focused ideological and ethical sense of the political matter, so did the Polish communist leadership, something we in the West might not realize. They too framed their policies in terms of good and bad. Martial law, for instance, was seen as the lesser of two evils, the greater misery being a Soviet-led military invasion.

Author Gregory Domber reminds us of the Brezhnev doctrine, "fraternal socialist assistance," exemplified by the 1968 military intervention in what was then Czechoslovakia, and of Moscow’s intimidation of Warsaw right up until the Gorbachev era. Polish leader Wojciech Jaruzelski found himself between a rock and a hard place, as he had to appease the Soviets yet needed Western financing for economic revitalization.

This brings up a strength of Domber: While Jaruzelski has often played the role of dictator in the mainstream media’s imagination, the author depicts him as neither simplistically autocratic nor weak, but as assertive of Poland’s rights, someone who directly told the Americans that he didn’t like his nation being a pawn in the superpower struggles.

Given the title, one does not expect an account of the Vatican’s important role, but Catholic readers will nonetheless regret the minimal discussion on St. John Paul II and his heroic stand against his country’s communists. The author also leaves out the spiritual nature of this clash, with the Catholic Church taking a leading role, though snippets of the church’s activity, including that of Polish-American Cardinal John Krol and Poland’s primate, Cardinal Jozef Glemp, are discussed.

The book’s main strength is also its weakness: Domber’s penchant for numbers, names and other specifics paints a very lively, detailed portrait of the era, one of more value to historians than to the casual reader.

Despite the author’s attempt at even-handedness, Ronald Reagan’s strengths shine clearly, specifically his faith in freedom and America’s role as the "city on the hill." We get an excellent account of the zeal that the declaration of martial law in Poland Dec. 13, 1981, awakened in the president: "Upon hearing the news, Reagan was ‘absolutely livid’ and decided to take a stand, allegedly saying … that ‘something must be done. We need to hit them hard and save Solidarity.’ Reagan’s anger was equally apparent when he met with Polish-American leaders on Dec. 21."

Throughout his account of events, Domber notes the importance of emotions for the Polish and American leadership, and how anger, a feeling of injustice and a deep lack of trust often played a role in decision-making.

We likewise get a clear sense of the Reagan administration’s inner divisions, despite the shared fervor: "The administration was in need of a ‘coherent comprehensive policy on Eastern Europe’ and remained conflicted on how to promote change." The neocons wanted to punish Poland, but diplomats tried to restart things, including by engaging "directly with the Soviets."

The doctrine of differentiation called for the U.S. to "encourage diversity (between the Soviet Union and Eastern Europe) through active political and economic policies tailored to individual countries." Domber goes on to write: "Differentiation was meant to encourage liberalizing tendencies in the region, increase economic independence of East European countries on the West, expose the region to demands for better human rights performance, increase antagonism between Moscow and some of the East European states and weaken the Warsaw Pact as a unified military institution.’"

Nondifferentiation called for minimal interaction with the entire region, primarily to stop Western technology from going to the Soviet Union and to force Moscow to subsidize the Eastern bloc’s economies, thus diverting resources from its military.

Domber weaves differentiation, nondifferentiation and other Cold War theories throughout his book, connecting them to relevant personalities and policies.

Fans of these events will be engaged throughout the book, as the entire 1980s witnessed such fast-paced events. But less enthusiastic readers might get lost in the dizzying array of names, policies and political and military abbreviations and terminology.