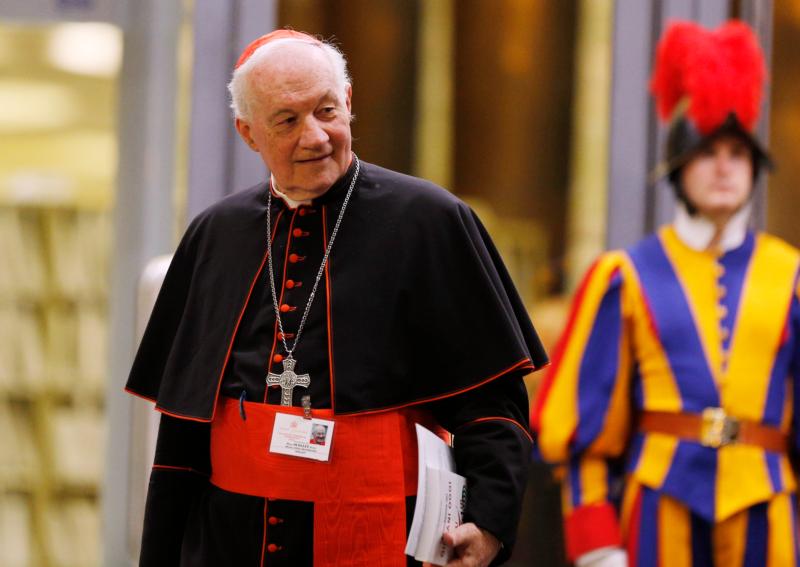 ardinal Marc Ouellet, prefect of the Congregation for Bishops, leaves the opening session of the Synod of Bishops on young people, the faith and vocational discernment at the Vatican Oct 3. The Associated Press reported Jan. 1 that it obtained a letter written Nov. 11 by Cardinal Ouellet asking the U.S. bishops to delay a vote on several proposals for responding to the sexual abuse crisis. (CNS photo by Paul Haring)

VATICAN CITY (CNS) — The surprising news in November that the Vatican had asked U.S. bishops not to vote on several proposals for responding to the sexual abuse crisis was motivated by a lack of time given the Vatican to study the proposals and potential conflicts with church law, according to a letter obtained by the Associated Press.

AP reported Jan. 1 it had obtained the letter written Nov. 11 by Cardinal Marc Ouellet, prefect of the Congregation for Bishops, to Cardinal Daniel N. DiNardo of Galveston-Houston, president of the U.S. Conference of Catholic Bishops, asking that the votes be delayed.

Cardinal DiNardo informed the bishops of the Vatican’s request Nov. 12, at the start of their fall meeting, the agenda of which was primarily focused on the sexual abuse crisis and the accountability of bishops.

“Considering the nature and scope of the documents being proposed by the (conference), I believe it would have been beneficial to have allowed for more time to consult with this and other congregations with competence over the ministry and discipline of bishops,” Cardinal Ouellet wrote, according to the AP, which also reported that a draft of the U.S. proposals arrived at the Vatican only Nov. 8.

In response to questions from AP, Cardinal DiNardo said, “It is now clear there were different expectations on the bishops’ conference’s part and Rome’s part that may have affected the understanding of these proposals.”

The proposals included standards of episcopal conduct and the formation of a special commission for reviewing complaints against bishops for violations of the standards.

“From our perspective,” Cardinal DiNardo told AP, the U.S. bishops’ proposals “were designed to stop short of where the authority of the Holy See began.”

The USCCB president said his surprise at the requested delay was genuine, because “in early October, we shared the content and direction of the proposals with multiple dicasteries of the Holy See. Finding no objection, we moved forward on the final drafts.”

“We had not planned, nor had the Holy See made a request, to share the texts prior to the body of bishops having had an opportunity to amend them,” he told AP in a message also made available to Catholic News Service. The Vatican press office did not immediately respond to a request for comment.

The November meeting, Cardinal DiNardo said, was designed to put the proposals “into final form, after which it would have been possible for the Holy See to have an opportunity to review and offer adjustments.”

“There were additional discussions on or around November 6 with Cardinal Ouellet as to the proposals,” he said. “At that point, I thought it best to share the texts with him. I advised Cardinal Ouellet that any delay in finalizing these texts in November would prove a great disappointment to the faithful who were expecting their bishops to take just action.”

“Though there were canonical precisions mentioned” as necessary by the Vatican, he Cardinal DiNardo said, “the emphasis seemed to be on delaying votes and not wanting to get ahead of the February meeting of episcopal conference presidents.”

Cardinal Ouellet’s letter, according to AP, acknowledged that bishops’ conferences have certain powers, but insisted “the conference’s work must always be integrated within the hierarchical structure and universal law of the church.”

At the time of the November bishops’ meeting, both the Vatican and Cardinal DiNardo had declined to make a copy of Cardinal Ouellet’s letter public,

In a report Nov. 13 on the delay, CNS had reported that an official of the Congregation for Bishops, responding on behalf of Cardinal Ouellet, said his office was “working to ensure the best evaluation and accompaniment of the questions raised by the American episcopacy.”

At the same time, CNS reported that Andrea Tornielli, a Vatican reporter later named by Pope Francis to be editorial director of the Dicastery for Communication, had written on the Vatican Insider website that “a Vatican source involved in the matter” told him: “It is wrong to think the Holy See does not share the objective of the U.S. bishops to have effective instruments for combating the phenomenon of the abuse of minors and to establish firm points regarding the responsibility of bishops themselves.”

“The motive for asking for a postponement (of the vote),” the source had said, “should not be considered putting on the brakes, but an invitation to better evaluate the proposed texts, including in view of the meeting in February of all the presidents of the bishops’ conferences of the world with the pope dedicated to the struggle against abuse.”

Tornielli reported that the Vatican believed the proposal on standards of accountability for bishops “goes beyond both civil and canon law” and the Vatican raised concerns “regarding the generic nature of some passages” and “incoherence between the contents of the document regarding the national commission on the responsibility of bishops and the Code of Canon Law.”

For example, his source said, “in the draft given to the Vatican, the commission is described as a nonprofit institution without having a juridical and canonical figure, but it is able to exercise a power of judgment on bishops.”