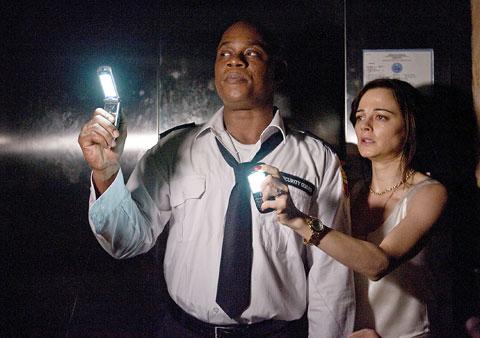 NEW YORK (CNS) — Let us ponder the stuck-elevator conundrum. What is there to fear the most: Claustrophobia? Vertigo? The dude next to you who keeps scratching his scalp?

"Devil" (Universal) asserts that the fear should come instead from Satan, especially when the prince of darkness is looking to dispense a little rough justice to evildoers.

Director John Erick Dowdle and screenwriter Brian Nelson, working from a story by M. Night Shyamalan, place reliable scream queen Bojana Novakovic (best known for her role in last year’s "Drag Me to Hell") among a handful of elevator riders with unsavory pasts, then puts the lot through some decidedly less-than-scary paces. Chris Messina plays Detective Bowden, who doesn’t believe in Satan and spends his screen time watching the riders on the security camera and ordering them about.

Were this film more accurately titled "Satan Stalks a Philadelphia Elevator Shaft," who would go? Instead, to give this dud some supposed gravity, the filmmakers paste on a biblical and religious veneer, beginning with the verse from the Chapter 5 of the First Letter of Peter about the devil "prowling around like a roaring lion looking for someone to devour."

Yes, but in a Philadelphia high-rise? The whole rapidly fizzling enterprise is far too frivolous to warrant scripture quotations. On a purely cinematic level, moreover, there’s not one genuine fright.

The film contains fleeting crude and crass language and a dubious, though incidental, use of Catholic imagery. The Catholic News Service classification is A-III — adults. The Motion Picture Association of America rating is PG-13 — parents strongly cautioned. Some material may be inappropriate for children under 13.

Jensen is a guest reviewer for Catholic News Service. More reviews are available online at www.catholicnews.com/movies.