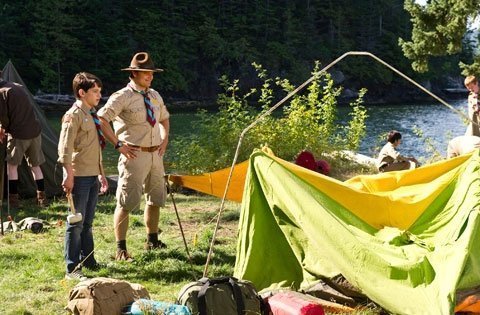 NEW YORK (CNS) — School’s out, and the local country club is the focus of fun in "Diary of a Wimpy Kid: Dog Days" (Fox 2000). This second sequel in the comedy franchise that started with 2010’s "Diary of a Wimpy Kid" is based, like its predecessors, on the "novels in cartoons" of Jeff Kinney.

Sourced from the third and fourth books in Kinney’s series, Maya Forbes and Wallace Wolodarsky’s screenplay provides a warm, kid-friendly outing that emphasizes the virtue of honesty and the importance of familial ties.

Zachary Gordon once again plays awkward preteen protagonist Greg Heffley. With summer just starting, Greg plans a housebound season of soda and video games. His dad, Frank (Steve Zahn), has different ideas, seeing the break from school as an opportunity for the two of them to bond through a long sequence of outdoor activities.

Greg initially evades this dread prospect by getting his loyal sidekick, Rowley (Robert Capron), to invite him to spend his days hanging out at the aforementioned club, where Rowley’s parents are members. This ritzy destination is made doubly desirable by the fact that Greg’s school crush, Holly (Peyton List), teaches tennis there.

When he and Rowley have a falling-out, however, Greg is left to rely on subterfuge to smuggle himself into the precincts of the one-percenters each day.

His deceitful scheme, needless to say, soon goes awry, thanks in part to his knuckleheaded older brother — and frequent nemesis — Rodrick (Devon Bostick). Rodrick exploits Greg’s fibbing to worm his own way into the luxurious facility, with a gluttonous eye on smoothies and anything that involves bacon.

Increasingly ensnared by his own falsehoods, Greg scrambles to regain the affection of his true love and to rescue his friendship with Rowley as well as his relationship with his parents.

Greg’s predicament allows director David Bowers to deliver a moving message amid the laughs, especially as father and son eventually reconcile to battle a common enemy — the outdoors.

Though it follows a predictable arc — and features such done-to-death gags as the diver who surfaces minus his swimsuit — "Dog Days" still makes for an enjoyable ride.

A touch of vaguely crass humor, such as the name of Rodrick’s band, "Loded Diper," is also easily overlooked in favor of the generally amiable proceedings. So too is a locker-room scene in which a couple of portly men’s towels ride down in the off-putting manner of the proverbial plumber.

Those in search of a screen adaptation that doesn’t involve courtly vampires, Latin spells or children forced to fight to the death need look no further.

The film contains some mild scatological humor. The Catholic News Service classification is A-I — general patronage. The Motion Picture Association of America rating is PG — parental guidance suggested. Some material may not be suitable for children.

Shaw is a guest reviewer for Catholic News Service