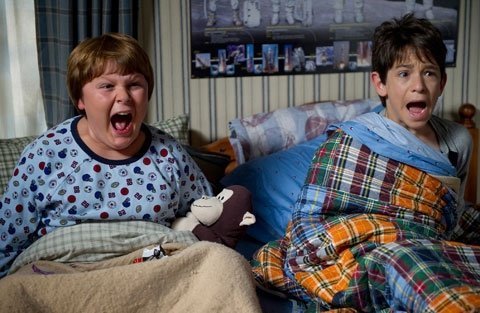 NEW YORK (CNS) — Both sibling rivalry and brotherly love put in an appearance in the gently humorous sequel "Diary of a Wimpy Kid: Rodrick Rules" (Fox).

Like its 2010 predecessor — called simply "Diary of a Wimpy Kid" — director David Bowers’ comedy is adapted from one of Jeff Kinney’s best-selling novels in cartoon format.

But this time the proceedings — which put their returning protagonist, hapless junior high school student Greg Heffley (Zachary Gordon), through another series of embarrassing situations and useful learning moments — are delivered in an even more family-friendly package.

Having achieved the exalted status of seventh graders, Greg and his ever-present best friend, Rowley Jefferson (Robert Capron), return to school expecting to put all humiliation behind them. Instead, after being smitten by her at first sight, Greg finds himself not only hopelessly tongue-tied but frequently made to look ridiculous in the presence of comely new classmate Holly Hills (Peyton List).

At home, meanwhile, Greg’s older brother Rodrick (Devon Bostick), continues to torment him with all manner of petty pranks.

Unhappy with this ongoing domestic conflict, mom Susan (Rachael Harris) — an advice columnist for the local paper whose articles rely heavily on her supposed expertise at parenting — tries to get her quarreling sons to bond. But her efforts have an unexpected outcome when aspiring rock drummer Rodrick goes from being Greg’s bullying persecutor to a mildly bad influence on him.

It’s characteristic of Gabe Sachs and Jeff Judah’s virtually unobjectionable script that the high jinks ensuing from the boys’ newfound partnership are uniformly good-natured and almost unrealistically innocent. Thus they throw a party in their parents’ absence that sees them engaged in such utter depravity as drinking an excess of soda and forming a coed conga line.

Scattered throughout this genial tale, however, are a few instances of childish scatological humor — Rodrick’s band, for instance is called "Loded Diper" — that may raise a red flag for some parents.

One of these mars an otherwise welcome scene in which the family attends a Sunday church service. On the way to worship, Rodrick tricks Greg into sitting on a chocolate-covered candy bar, a stunt which results in an easily misinterpreted stain on the seat of the younger lad’s trousers. Once inside, the congregation’s frenzied reaction to this unsettling sight disrupts the solemn distribution of communion.

For the most part, though, Greg’s tribulations are merely those that would try the soul of any 12-year-old, and he comes away — as youthful viewers are also clearly intended to — having gained new insights into the value of honesty, the importance of family bonds and the power of self-confidence.

The Catholic News Service classification is A-I — general patronage. The Motion Picture Association of America rating is PG — parental guidance suggested. Some material may not be suitable for children. – – –