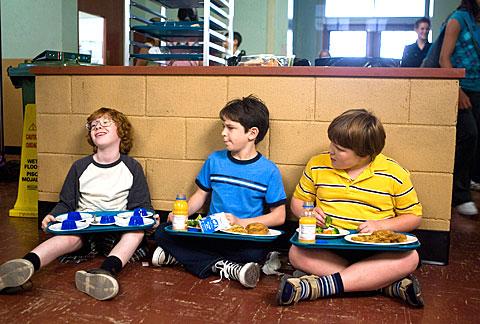 NEW YORK (CNS) — The social battlefield known as middle school provides the setting for the mostly likeable, though lightweight coming-of-age comedy "Diary of a Wimpy Kid" (Fox). While the proceedings sometimes veer into mildly off-color humor, precluding endorsement for all ages, there are worthwhile lessons on offer here for teen viewers who may sympathize with the tale’s flawed but good-hearted protagonist, Greg Heffley (Zachary Gordon).

As recounted in the chronicle that gives the film its title — Greg is at pains to point out, in one of his characteristic asides to the audience, that he is keeping a "journal," not a "diary" — Greg is determined to transform his first year at his new school into an opportunity to win those most coveted of adolescent prizes, popularity and status.

Yet his efforts to impress are not only frequently — though unintentionally — sabotaged by the carefree nerdiness of his long-standing best friend Rowley Jefferson (Robert Capron), but consistently ill-conceived on his own part as well. And, as Greg slips lower and lower in the lunchroom and recess pecking order, his home life is made miserable by the petty bullying of his cocky older brother Rodrick (Devon Bostick).

In his desperate desire to be considered cool, Greg jettisons Rowley and makes a number of other misguided moves. But he eventually learns the value of loyalty, the rewards of self-sacrificing friendship and the importance of gaining genuine acceptance by being true to yourself.

Director Thor Freudenthal’s adaptation of Jeff Kinney’s best-selling 2007 novel in cartoon format does, however, include a running gag about a girlie magazine Roderick keeps hidden in his room, as well as a couple of brief joke about which students have "cute butts." Additionally, the script — penned by the husband-and-wife screenwriting team of Jackie and Jeff Filgo — makes it clear, albeit in a restrained way, that one of the hierarchical divisions separating the students is based on the rate of pubescent physical development.

The film contains brief images of a scantily clad woman, a few instances of mildly gross and scatological humor, a couple of vaguely sexual jokes and at least one crass term. The USCCB Office for Film & Broadcasting classification is A-II — adults and adolescents. The Motion Picture Association of America rating is PG — parental guidance suggested. Some material may not be suitable for children.