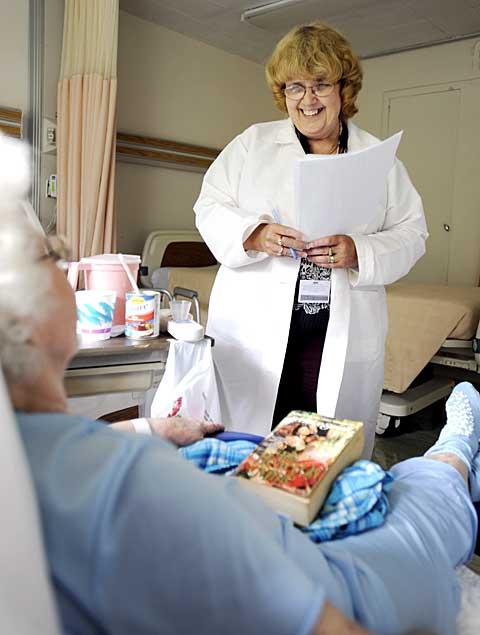 As a registered dietitian, Kristi Williams doesn’t expect to win any popularity contests.

"Most people generally hate talking to me. I’m not a very liked person," laughed Williams, who serves as clinical nutrition manager at St. James Mercy Hospital in Hornell.

It’s not her disposition that people find threatening, but the core message that Williams delivers: It takes work to keep your weight at a healthy level.

Yet Williams feels compelled to take a firm stand, based on statistics showing that two-thirds of American adults are overweight or obese, and that incidences of childhood obesity have more than tripled in the last 30 years. This trend raises the risk for cardiovascular disease, certain types of cancer, type 2 diabetes, hypertension and disability.

Diocesan parishes are doing their part to raise awareness and offer solutions through programs and activities related to diet and/or exercise. For instance, a "Healthy Eating, Healthy Living" seminar on April 25 at St. Paul Church in Webster — sponsored by the health ministry of the Webster-Penfield Catholic Connection — featured presentations by a nutritionist and a fitness instructor. Felice Armignacco, event coordinator, said the Catholic Church is a natural fit for addressing concerns related to obesity and being overweight.

"I think it goes to the issue of, what is the church’s role to people in general — not only with their spiritual health but with their bodies," said Armignacco, a parishioner of St. Rita in Webster and a longtime nurse. "The church, way back when, was doing healing; in Jesus’ time he was doing healing. This is our tradition. It’s perfectly logical for the church to do this kind of ministry."

How we got here

According to information provided by the Centers for Disease Control and Prevention, the rate of obesity among U.S. adults doubled between 1980 and 2004, before leveling off in recent years. Still, the CDC notes that approximately one-third of today’s U.S. adults is obese, and another one-third is overweight.

Experts blame the overweight/obesity crisis on an American society that has drastically upped its intake of unhealthy foods while decreasing its level of exercise. Busier lifestyles and the greater availability of "fast" food has resulted in fewer home-cooked meals. Exacerbating the problem are the trappings of the sedentary, "couch-potato" lifestyle — computers, big-screen televisions, hand-held video games and other technology.

"Sometimes, to get somebody to go outside for 15 minutes and take a walk is impossible," Williams remarked.

Though she said some people’s genetic makeups leave them prone to obesity, Williams maintained that most folks have the ability to control their weight by choosing the correct foods and steering clear of overeating. But that’s a tall order amid commercials and billboards hawking high-calorie, high-fat, high-sugar foods and drinks — which, a great majority of the time, are more pleasing to the palate than nutritious items.

"There’s no denying that a chocolate bar tastes better than broccoli. But your body needs complex carbohydrates, protein, good fats," Williams said. Then again, she added, "You can know every single thing there is to know about nutrition, but (eating right) is a completely different story. I may have the best intentions, but I’m more likely to forget the right things. People say to me, ‘I just need to have willpower, but I’m addicted to food.’"

Another unfortunate reality of dieting is that weight is gained much more easily than it’s lost, she said.

"It’s so easy to put on one pound, but to take off that same pound — it’s a lot of hard work. Sometimes it seems like it’s a very hard struggle to win," Williams said. Yet she emphasized that it’s still well worth the effort, based on the potential of obesity to shorten one’s life span and severely reduce quality of life.

The good news is that public efforts against obesity appear to be on the rise. For instance, First Lady Michelle Obama has launched a campaign to battle childhood obesity, and the Rochester-area Be a Healthy Hero campaign urges parents to exercise with their children and avoid fast-food restaurants.

In addition, a number of diocesan churches host or rent their parish halls to such nondenominational weight-loss programs as Weight Watchers or Overeaters Anonymous. In Ithaca, a Take Off Pounds Sensibly (TOPS) program meets regularly at St. Catherine of Siena Church, and an introductory session for Light Weigh was held there this spring. St. Matthew Parish in Livonia recently kicked off a Light Weigh program as well.

Light Weigh is a 12-week program that draws heavily from Catholic teachings, helping women and men overcome temptation by shifting the focus from food to God and prayer. The emphasis is not on exercise or changing the foods one eats, but eating smaller amounts of enjoyable foods.

"Instead of going to your obsession or addiction, God is there to give you the answers," said Patricia Ober, an Immaculate Conception parishioner who has led several Light Weigh programs since 2007.

Ober said she originally accepted a friend’s offer to try Light Weigh after her weight exceeded 200 pounds. She has since shed approximately 50 pounds through Light Weigh — "and I’ve kept it off."

For those wishing to learn more about a good diet coupled with exercise, St. Paul in Webster was the place to be on April 25. Armignacco said the "Healthy Eating, Healthy Living" program was convened because obesity "seems to be a timely topic right now."

Williams stressed that daily diligence is the X-factor in maximizing the success of such initiatives. There’s no quick fix to weight problems, she said, which is why she’s leery of advertisements for diet plans or pills that de-emphasize the importance of healthy eating and exercise.

"There’s a lot of people making a lot of money selling these products, and they end up making people frustrated. Usually they do not work," she stated.

A good model for the importance of hard work is Cheryl Dobson, 54, an assistant in Williams’ office at St. James Mercy. In 2003, Dobson underwent gastric bypass surgery at Rochester’s Highland Hospital after her weight shot to more than 300 pounds and her health worsened. This potentially risky procedure for obese people essentially reduces a stomach’s size and its need for food.

Dobson now weighs under 200 pounds, but said "I still have to fight to keep it off," in part because she’s prone to overeating as a response to stress.

So, Dobson goes out of her way to exercise by doing extra gardening, mowing the lawn, taking stairs rather than the elevator, and not spending excess time in front of the computer. She also eats yogurt for lunch and monitors her carbohydrate intake.

Since starting off on in the right direction is such a daunting process for many, Williams suggested that people "kind of take baby steps" to lose weight. She noted that she has counseled many people back to a healthier lifestyle, and has seen positive effects that go well beyond one’s physique.

"Your emotional, physical and spiritual health will be much better," she stated.