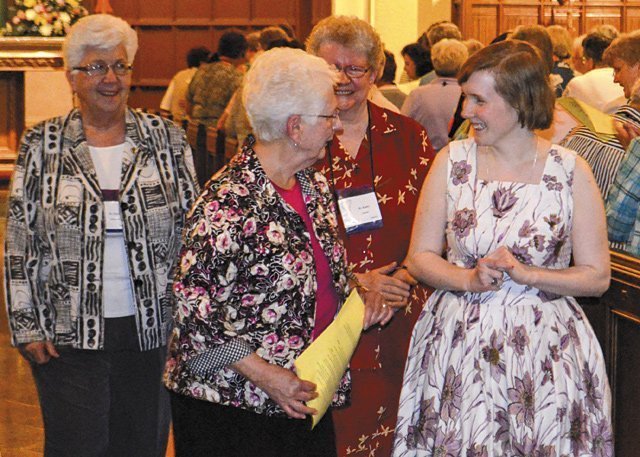 Sister JoAnne Courneen (left) speaks with Sister Colleen O’Toole (right) during the 2015 ceremony in which Sister O’Toole was accepted as a novice in the Sisters of Mercy.

Sister Colleen O’Toole was a junior in high school when she first wondered whether God was calling her to pursue a vocation as a woman religious. Although she dismissed the idea at first, by the time she’d graduated from college she’d begun to believe that God was indeed calling her to follow that path. She currently is finishing up the second year of her novitiate and hopes soon to make her temporary profession of vows as a Sister of Mercy.

Sister Anita Kurowski, on the other hand, didn’t know too much about religious life until she got to college. Although she was drawn to the work and lifestyle of women religious almost immediately, it took seven years of soul-searching and reflection before she knew God was calling her to become a woman religious. She made her final profession of vows as a Sister of St. Joseph of Rochester in August 2014. 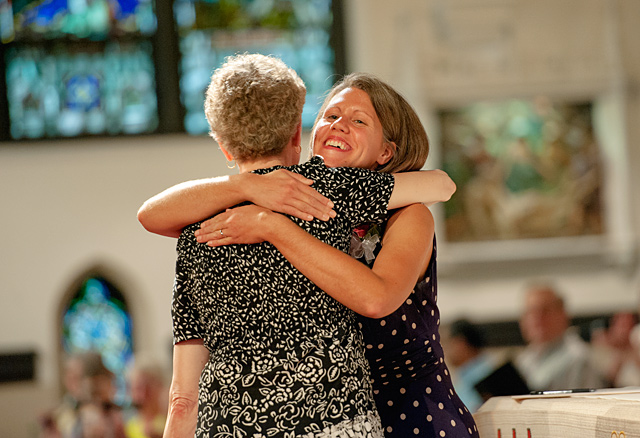 File photo
Sister Anita Kurowski receives a congratulatory hug in 2014 when she professed her final vows as a Sister of St. Joseph of Rochester.

As Sister O’Toole and Sister Kurowski’s stories demonstrate, the path to a vocation is unique to each individual, but the source of the call is always the same, according to Sister of Mercy Laurie Orman.

“God is the one that calls. It’s not us,” said Sister Orman, vocations minister for the Sisters of Mercy of Rochester.

Nonetheless, Sister Orman and Sister Donna Del Santo, vocations director for the Sisters of St. Joseph of Rochester, both said they work hard to ensure that young women know religious life is an option that is open to them. The key, Sister Orman said, is to maintain a presence in the community and let people see the work the sisters do.
“It’s not like before when women would be in school and all their teachers would be sisters. That’s not happening anymore, so … we try to plant those seeds (of a vocation) wherever we go,” Sister Orman said.

Sisters Orman and Del Santo use a variety of methods to spread the word. Both frequently participate in diocesan youth and young-adult events, facilitate retreats on local college campuses, and speak at local Catholic high schools and parishes. Their talks are not always focused on vocations to religious life and can cover topics ranging from Christian morality to making good decisions. The goal, Sister Del Santo said, is to help people of all ages to recognize and hear God’s voice and ask themselves what he wants of them.

“I always say I’m trying to create cultures of vocations in a broad sense,” Sister Del Santo explained. “I’m hopeful that in many ways I can help people find their place in the church, as a means to use their gifts.”

Sister Del Santo invites the public to the Sisters of St. Joseph’s motherhouse on the first Tuesday of each month to participate in a prayer for peace, and on the third Sunday of each month for adoration and evening prayer. She also coordinates the Sisters of St. Joseph’s volunteer program, through which participants serve others while getting to know the sisters and what they do, she said.

Sister Kurowski participated in a weeklong volunteer experience with the Sisters of St. Joseph during the Christmas break of her freshman year at Nazareth College, and she said the experience changed her life. She signed up for the service week because she wanted to give back, but the seeds of her own vocation took root while she was living and working with the sisters that week, and hearing them talk about their experiences in ministry.

Sister O’Toole had a similar experience with the Mercy Volunteer Corps. Sister O’Toole began thinking about a vocation during her junior year at Our Lady of Mercy High School when several sisters visited her classroom to talk with students about their options after college. At the time she thought religious life sounded nice but was not for her, yet as she made her way through her college years, Sister O’Toole said she had a nagging feeling that she should give that vocation another look.

After graduation she embarked upon a yearlong stint with the Mercy Volunteer Corps, during which time she realized she not only loved what she was doing — teaching math to women and young girls in Detroit — but also the Sisters of Mercy with whom she was working as well as what they stood for. At the conclusion of that year she said she began the process of entering the congregation.
Developing relationships with individual women religious helped both Sister O’Toole and Sister Kurowski discern their own vocations, they said. What stood out from Sister Kurowski’s first volunteer experience with the Sisters of St. Joseph, was not so much the work she did but the way the sisters she worked with were energized by their work and comfortable with openly talking about God, she said.

“God was their reason for doing everything. I really felt that had always been the same for me, the reason for all of my choices, and here was a group of people where to talk about that was celebrated, encouraged,” she recalled.

Although Sister Kurowski was drawn to the Sisters of St. Joseph, it took several years before she was able to discern her own calling with any certainty.

“I had to grow in my own relationship with God. How do I really know that I’ve heard God’s voice? I had to really get more solid in that before I knew I had been called,” she said.

Sister O’Toole said she also had to deepen her relationship with God before recognizing her own calling to be a Sister of Mercy.

“God speaks to us through our desires, and I didn’t really understand that for a while,” she remarked.

“God speaks through our own hearts and a lot of the guidance that you need is already within you,” Sister Kurowski added. “You just have to know how to hear it.”