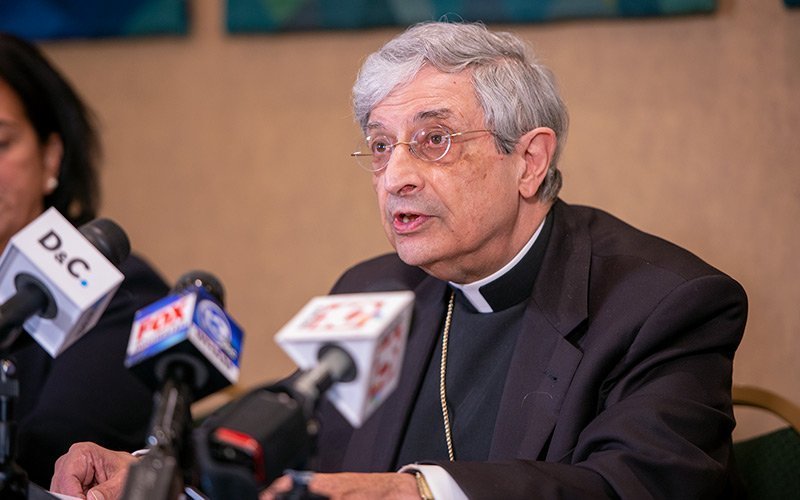 Bishop Salvatore R. Matano addresses the media during a Sept. 12, 2019, press conference announcing that the Diocese of Rochester had filed for Chapter 11 reorganization earlier that day. (Courier file photo)

Despite working to reorganize its affairs since filing for Chapter 11 bankruptcy on Sept. 12, 2019, the Diocese of Rochester has thus far been unable to reach a global settlement to resolve hundreds of claims asserted by sexual-abuse survivors.

Court-ordered mediation — much of which was conducted remotely due to COVID-related shutdowns — has not yielded a consensus on the amount owed to survivors nor the obligation of the diocese’s insurers to provide coverage for claims, many of which are decades old.

Acknowledging the apparent impasse in negotiations, U.S. Bankruptcy Judge Paul R. Warren issued a May 2022 decision allowing survivors to proceed with litigation directly against parishes and other Catholic organizations within the diocese that have not sought bankruptcy protection. Warren’s decision, which is currently on appeal, capped a frustrating period in the case for the diocese.

In late May of 2021, the diocese asked the court to approve a $35-million settlement with two of its insurers. According to filings by the diocese, that proposed settlement would have covered approximately 159 abuse claims and represented an insurance-only contribution of more than $220,000 per insured claim.

The committee representing the interests of abuse survivors opposed that settlement, arguing that it undervalued the insurer’s coverage obligations and provided “an unreasonably low per claim payment.” Judge Warren rejected the initial settlement and ordered the parties back to mediation.

More than a year later, a global resolution remains elusive. However, some momentum may be building as the third anniversary of the diocese’s bankruptcy filing nears.

On June 23, 2022, the diocese filed a motion seeking Judge Warren’s approval of settlement agreements that would provide $107.25 million in payments from the diocese’s four main insurers. The motion states that settlement proceeds would be combined with a $40.5 million contribution from the diocese, parishes and affiliated entities to fund a $147.75 million compensation trust for sexual-abuse survivors.

The filing shows that the two insurers involved in the prior settlement proposal increased their collective offer by more than 20 percent, while two insurers that had not previously agreed to a settlement committed to provide an additional $64.6 million in funding.

The diocese’s motion estimates that the increased funding proposed in the current settlement “would allow for an average recovery of more than $300,000 per survivor claim.” Yet the settlement remains opposed by the survivors’ committee, which argues that even the enhanced amounts “undervalue the claims” of survivors.

The diocese and survivors will have an opportunity to argue their positions and present evidence on the reasonableness of the proposed settlement at a hearing currently scheduled before Judge Warren in late January 2023.

Filings aim to focus on claims against diocesan entities

The diocese recently asked the bankruptcy court to consider whether approximately 74 claims should be disallowed and expunged because they allege abuse by individuals for whom the diocese is not responsible, including members of religious orders, employees at schools and other facilities owned and operated by religious orders, and other individuals and entities not associated with the Diocese of Rochester.

In connection with its objections to these claims, the diocese released a statement clarifying that it was not questioning the veracity of these claims but asserting that the diocese should not be held liable for the acts of “persons or entities that were not and are not under the control or direction of the Diocese of Rochester.”

According to the diocese’s objections, schools and other institutions owned and operated by religious orders are separately incorporated and are not part of the diocese under New York law. Moreover, under canon law, members of religious orders do not report to the local bishop, but instead to the governance structures of their respective orders.

“Institutes of consecrated life conduct schools as part of their proper works,” Father Daniel J. Condon, diocesan chancellor, explained in an interview. “They’re established with a certain level of autonomy, and the diocese doesn’t direct the daily administration of schools, hiring the faculty or anything else.”

Thus, he said, the diocese raised the objections to ensure that payments to the roughly 400 remaining survivors would not be diluted by claims for which the diocese isn’t responsible. The intent is to “make more money available for the people … we do have responsibility for,” he said.

In the statement, the diocese added that it “reaffirms its intention to resolve this matter justly, charitably and in a timely manner” through “a consensual plan of reorganization that will provide fair compensation for those who have been harmed. We continue to pray for the survivors of sexual abuse and renew our ongoing efforts to assure that our safe environment protocols protect God’s children and all persons from such tragic and sad situations.”

Another positive sign is that mediation discussions remain ongoing despite the survivor committee’s disagreement with the diocese’s proposed insurance settlement. On July 8, Judge Warren appointed Paul Van Osselaer as an additional mediator to work alongside U.S. Bankruptcy Judge Gregg W. Zive, who has facilitated prior negotiations. Van Osselaer is a full-time mediator and arbitrator specializing in insurance coverage.

Mediation privilege bars participants from discussing the sessions, which took place in Rochester in late July and have continued by video conference in August. Yet Father Condon has expressed cautious optimism that the diocese may yet achieve its goal of a global resolution that would resolve the diocese’s liability for sexual-abuse claims as well as the liability of parishes and other Catholic organizations affiliated with the diocese.

“We still hope for a global resolution and really think that’s in the best interests of everybody,” Father Condon said.

Millions must be spent as process drags on

Meanwhile, in a May 20 declaration in support of the proposed insurance settlement, diocesan Chief Financial Officer Lisa Passero stated that “assets of the Diocese that could be used toward payments of survivor’s claims are being used to pay ongoing expenses of the Diocese’s bankruptcy case, including professional fees.”

The diocese’s latest financial report filed with the court shows that from inception of the bankruptcy case through May 31 of this year, the diocese paid more than $7 million to lawyers, experts and consultants in the case.

When people read media reports about these expenditures, “they’re thinking they’re our attorneys,” Father Condon said, acknowledging that fees to diocesan attorneys and consultants are included in the tally. But, he noted, “the survivors’ committee also has bankruptcy attorneys, they have insurance counsel, they have valuation experts … The diocese pays for all of it.”

In addition to professional fees for its own professionals and those of the survivors’ committee, the diocese must also pay quarterly fees imposed by the United States Trustee program, which oversees the administration of bankruptcy cases, he noted.

“The diocese would much prefer to use its limited resources to fund a resolution for survivors than to see money spent on court costs and professional fees,” Passero said, reiterating the need to reach a settlement and resolution of the bankruptcy case as soon as possible.