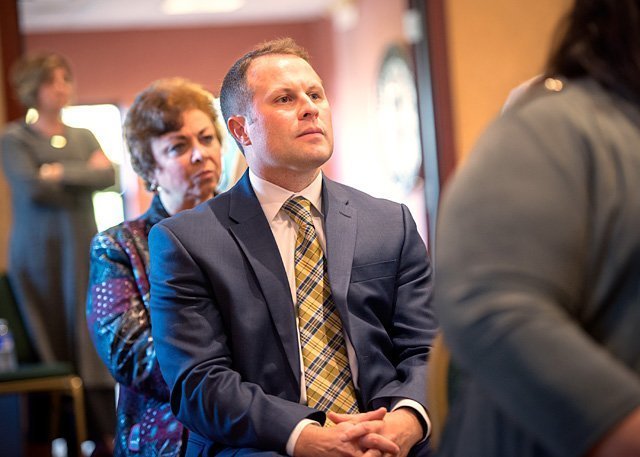 Anthony S. Cook III, superintendent of schools for the Diocese of Rochester, listens to a Nov. 4 Middle States Association presentation at the diocesan Pastoral Center in Gates.

GATES — A team of representatives from the Middle States Association of Colleges and Schools has recommended that the Diocese of Rochester’s 19 Catholic elementary and middle schools be accredited by the national organization.

At the conclusion of a weeklong visit to the diocese, Angela Rufo, chairperson of the association’s visiting team, announced her team’s findings during a Nov. 4 presentation at the diocesan Pastoral Center.

"The visiting team is recommending to the committee that the Diocese of Rochester be accredited for a period of seven years," Rufo said, as applause erupted from the principals, teachers and diocesan staff who attended the presentation.

After visiting each of the schools and spending several days with the staff of the diocesan Catholic Schools Office, Rufo and her team put together a report detailing the reasons for their recommendation. This report will be presented to the Middle States Association’s commissioners during their meeting in April, and they will make the final decision on whether to accredit the diocesan school system, Rufo said. She also noted that her team was pleased with what they discovered in local Catholic schools.

"We found a faith community that listens to the words of the prophet Micah, called to love one another, act with justice and walk humbly with our God," Rufo said.

"Obviously we’re very excited about the future of our schools, and this just provides a starting point for us to build into the future," Cook said.

The visiting team’s recommendation is the most recent step in a process that began during the 2013-14 school year, when representatives from each of the 19 schools as well as the diocesan schools office began meeting regularly, Cook noted. He said they sought information from parents, students and faculty members, and began compiling a report containing evidence that the schools meet the Middle States Association’s standards of quality in the following 12 areas:

* Planning for growth and improvement

The resulting report, which spanned 423 pages, provided a detailed account of the mission and characteristics shared by the 19 schools, as well as objectives for the future, according to Jean Mercandetti, who served as the diocese’s lead internal coordinator for the accreditation process.

"You’re not looking at an individual school, but … you see the whole picture of the whole diocese’s school system," said Mercandetti, who taught at St. Mary School in Canandaigua for nearly two decades before retiring in 2015.

Like many of the other Catholic schools in the diocese, St. Mary School had sought and obtained Middle States Accreditation on its own. This is the first time, however, that the diocese has sought accreditation as a system of Catholic schools, Cook said. Although each school is its own separate entity, they operate together as a system of schools, he explained, noting that the schools’ principals meet regularly, for example, and that their faculties take part in a shared conference day each fall.

Obtaining Middle States accreditation as a system of schools would provide an affirmation of the quality education offered at each of the system’s schools and would reinforce the sense of unity among the schools, Cook said. The schools also are able to share the financial burden of the accreditation process, which costs several thousand dollars, he added.

Currently, 49 percent of students enrolled across the 19 schools are performing at or above grade level in both English language arts and math, and those percentages have been steadily rising over the past few years, Cook said. The diocesan team put together a schedule of action steps to take in order to achieve those goals, and the first steps have already been put into motion, he said. One of these is the implementation of the new iReady Diagnostic and Instruction tool, which the schools began using in September.

The visiting team from the Middle States Association strongly encourages the diocesan schools office to develop curricula for English language arts and math that will help the schools achieve their academic goals, Rufo noted during her Nov. 4 presentation, which included several highlights of the visiting team’s report to the Middle States Association.

"I actually am excited by the recommendation to develop a curriculum that will be specific to our system," Cook told the Catholic Courier after the presentation. "We always felt that was something we needed to do better. This (recommendation) gives us the support to kind of move in that direction."

During her presentation, Rufo also praised several aspects of the school system, including the schools’ safety and cleanliness, the "plethora" of clubs and opportunities available to students, and the collaboration between diocesan officials and school leadership.

A video of the presentation may be found on the Diocese of Rochester’s YouTube channel at www.youtube.com/watch?v=oSe5UJz14b0.