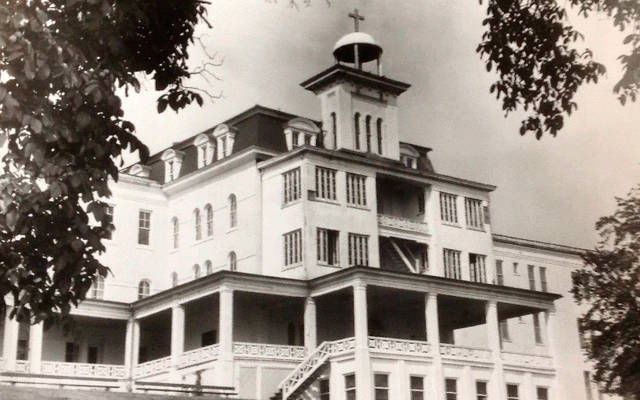 WATKINS GLEN — High in the hills above this Schuyler County village, a short distance from a popular state park, lies some deserted acreage with enough architectural remnants to hint of past activity.

Set back off the southern end of Lakeview Avenue are some dilapidated benches in an overgrown field, adjacent to an abandoned brick building. That edifice served as the gymnasium for a Catholic boys’ institution commonly known as “Padua” — St. Anthony of Padua Minor Seminary and Prep School, which operated from 1949-70.

The property’s history predates Padua by several decades. A large, stately structure, built in 1872, housed the Glen Springs Resort and Sanitarium — an exclusive facility to which such celebrities as Franklin D. Roosevelt and Bing Crosby flocked, seeking curative powers from the renowned mineral water found in nearby springs. In 1949, the site was purchased by the Order of Friars Minor, and the former resort was converted into an educational facility for high-school boys, with the aforementioned gym being added in 1953.

Most of Padua’s students came from downstate New York as well as New Jersey and were largely of Polish descent, as was the faculty. Two exceptions were Fathers Richard and Robert Beligotti, now senior priests of the Diocese of Rochester. The twin brothers, natives of St. Mary of the Lake Parish, grew up only a few blocks away and were among the school’s few commuter students, frequently making the steep climb to Padua by foot.

“We’d be there for the 8 o’clock Mass, and then the classes. We got out (for the day) around 4 o’clock,” Father Richard recalled. “Many times, we were invited for supper for special occasions.”

The Beligottis entered Padua in the fall of 1956 and graduated in 1960, later attending St. Andrew’s and St. Bernard’s seminaries in Rochester before being ordained diocesan priests in 1968. According to the twins, the Franciscan priests who taught at Padua were highly competent, yet also on the strict side.

“You learned, whether you wanted to or not,” Father Robert remarked.

The Beligottis noted that they were among the few Padua graduates who went on to enter the priesthood. “A number of them became doctors, dentists. Some of them taught,” Father Richard said.

He and his brother fondly recalled their experiences with Padua’s priests, brothers and students: taking part in enjoyable Christmas celebrations and May crownings; attempting to sing along to Polish songs despite not understanding the words; bringing peanut-butter sandwiches from home when they didn’t care for the Polish food being served; and playing such tunes as “Bolero” and the “William Tell Overture“ a bit too loudly during study hall.

Padua was actually one of two local prep seminaries in existence during the mid-1900s. Three miles to the southeast, in Montour Falls, was St. John’s Atonement Minor Seminary, begun in 1949 by the Franciscan Friars of the Atonement. Located on College Avenue near Route 14, St. John’s Atonement operated in the former Cook Academy, where various private schools had existed since the structure’s founding in 1862.

“Bishop Kearney welcomed religious orders into our diocese,” Father Robert Beligotti noted in explaining the growth of seminaries during that period.

However, Padua ceased operation in 1970 due to decreasing availability of faculty; St. John’s Atonement closed for similar reasons in 1973. Whereas the former St. John’s Atonement is still standing, currently serving as the New York State Academy of Fire Science, Padua’s historic main building and several other structures were demolished in 1996 before the Franciscans sold the property in 2002. Yet Father Austin Budnick, OFM, a teacher at Padua since 1952, remained living on that site well into the 2000s, serving as its caretaker. Father Budnick, who died in 2009, also ministered at area Catholic parishes, as did other priests from both Padua and St. John’s Atonement while those schools were open.

Annual Padua reunions are still held, with the most recent get-together having taken place Aug. 10 as living and deceased alumni were honored during a Mass at St. Mary of the Lake Church. Padua’s property is now owned by Martin Wojcik, an entrepreneur from New Jersey. Various development possibilities have been discussed locally in the decades since Padua’s closing, but to date no action has been taken.

As for the Beligottis, they moved to Venice, Fla., in 2015 after reaching senior-priest status in 2013. They make a point of returning to the Rochester Diocese each year; during their most recent trip this past spring, they drove by Padua’s grounds to reminisce and also visited other sections of their native Watkins Glen, a noted tourist community on the southern tip of Seneca Lake.

“When we come here to visit, we always go down to Watkins,” Father Robert said. “We love to go through the Glen.”