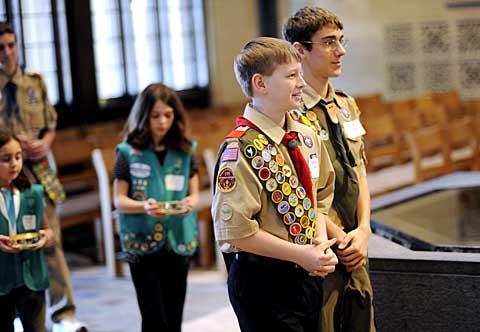 When Dave LeVesque was in middle school, he was working toward his confirmation, and also was making his way toward earning a Scouting emblem called Ad Altare Dei.

"(Confirmation classes and the badge program) were tied closely, and it’s still that way," said LeVesque, who now cochairs the Diocesan Catholic Committee on Scouting.

On March 6 at Sacred Heart Cathedral, diocesan Scouts who have been working toward earning religious emblems in 2009-10 received their awards from Bishop Matthew H. Clark during a celebratory Mass.

Boy Scouts and Girl Scouts of all ages were invited, along with their parents and families, to participate in this special presentation service.

The event was planned by the Diocesan Catholic Committee on Scouting, which is part of a national chapter. The Rochester DCCS committee was started in 1947 by Bishop James E. Kearney. Its members meet six to nine times a year to discuss faith and promoting the formation of Catholic Scouts, LeVesque said. The committee is made up of representatives, often scout leaders, of each of the seven councils involved from each district of the diocese. The committee board consists of two cochairs and a chaplain.

"We have quite a client army of religious emblem counselors," LeVesque joked. "Some folks on the committee have been supporting it for 20 years. We have great diversity. We’re very dedicated to Scouting and Catholic formation."

There is diversity among the Scouts earning the emblems, too. According to LeVesque, one of the boys in his troop is Buddhist, but is still working toward earning the Catholic emblem. He noted that there are more than 43 religious denominations involved with Boy Scouts of America.

"With this (religious) diversity (in Scouting), we want to reach out to all Catholic Scouts," LeVesque said.

In order to earn their emblems, Scouts were given a booklet with different age-appropriate projects and assignments. The Scouts made their way through the booklets, sometimes over a few months. When they were finished, the booklets were signed by someone in the parish, typically the pastor. In the cases of the older Scouts, they worked with a counselor to better understand their faith.

According to the Diocese of Rochester’s Web site, Boy Scouts can receive one of four emblems according to their age group. Light of Christ, for Tiger and Wolf Cubs in grades 1-2, focuses on a personal relationship with Jesus. Parvuli Dei, designed for Bear and Webelos Scouts, helps boys in grades 3-5 to become more aware of God’s presence in their daily lives. Ad Altare Dei can be earned by Boy Scouts of the Latin Rite in grades 7-8, and focuses on the seven sacraments. The Pope Pius XII emblem instructs those in high school and college on how to find their church-related ministries and vocations.

Girl scouts, according to the Web site, are able to earn recognition for their religious programs. The Family of God program, for girls ages 7-9, explores a wide range of activities that lead to the discovery of the presence of God. I Live My Faith is a program designed for girls ages 9-11 that discusses discovery, prayer, service and sacrament, emphasizing the role of the family in religion. The Marian medal brings girls ages 12-15 closer to Mary, who serves as an example of the church. The Spirit Alive medal, created for young women in senior high, invites participants to explore Scripture, prayer and participation in order to better understand their mission as a disciple of Jesus.